Assessment Of The Status Of The Islamic State


Michael Knights from the Washington Institute for Near East Policy wrote another excellent assessment of the state of the Islamic State’s insurgency in Iraq in the recent issue of the CTC Sentinel published by the Combating Terrorism Center at West Point. In the summer of 2016 the Islamic State was talking about saving its manpower and shifting towards an insurgency in the face of Iraqi offensives and U.S. Coalition air strikes. That became reality in late 2017 as the group didn’t put up a fight against the last Iraqi offensives to free the final bits of territory held by the militants. Instead, IS was withdrawing to the rural areas of central Iraq to try to rebuild again akin to what it did from 2011-14 after it was defeated by the Surge. Today, it is still active in the same six provinces it has always been, but the number of attacks is far lower. Knights asked the questions is the group simply incapable of carrying out more operations due to its losses or is it simply preserving its resources and aiming for more targeted attacks?

First, Knights noted that there has been a dramatic decrease in violence in Iraq. In 2018 there were an average of 127.1 attacks per month in Anbar, the Baghdad belts, Diyala, Kirkuk, Ninewa and Salahaddin. That compared to 490.6 per month in just Anbar, the Baghdad Belts, Diyala and Salahaddin. Overall, that was a 75% drop in incidents. In Anbar for instance attacks dropped from 66.0 per month in 2013 to 60.6 in 2017 all the way down to 9.1 in 2018. Likewise, in Salahaddin there were 84.0 in 2017 versus just 14.2 in 2018. Was that change due to the group suffering such heavy losses in Iraq and Syria that it was no longer able to sow as much destruction as it once had or was it just focusing upon fewer areas? 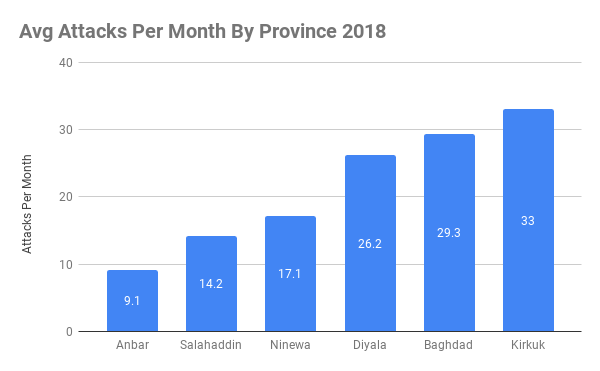 Second, Knight found different trends going on in different provinces. Anbar had so few incidents at 9.1 per month in 2018, that it appeared that the Islamic State was no longer interested in it. In Salahaddin, IS had bases along the border with Diyala in the Hamrin Mountains, but there were very few incidents there as well at just 14.2 attacks per month. Perhaps IS sent its forces elsewhere or perhaps the heavy Hashd presence including Sunni auxiliaries had provided adequate security? The Baghdad belts did have 29.3 attacks per month, but quality attacks saw a large drop from 65% of all incidents in the first quarter of 2018 to 46% in the third. The Baghdad Operations Command’s focus upon the north and south where most violence occurred and U.S. intelligence likely played a role in lowering violence there. Diyala had 26.2 attacks per month, and was the earliest province to switch to an insurgency as IS never overran any significant territory there. In Ninewa, Mosul was destroyed depriving IS of one of its main bases and sources of revenue. Instead, it is now present south of the city in rural areas. There was an increase in serious attacks in that governorate as well. Finally, Kirkuk might have the most robust insurgency. The militants are going after civilians, Sunni militias and local leaders. The Iraqi forces there have also done a poor job, usually showing up after attacks and harassing the locals when they do arrive. IS is said to have freedom of movement at night in the rural south.

That all led to Knights’ conclusion that IS is focusing upon a few rural areas in central Iraq. In Anbar, Baghdad, and Salahaddin many areas have been abandoned for now. That’s in part due to better security and traditional bases like Ramadi, Fallujah and Tikrit being inaccessible to insurgents since they were liberated. Southern Ninewa and Kirkuk along with the Diyala-Salahaddin border now have the strongest IS presence. Its attacks are more targeted rather than indiscriminate. However the group faces a dilemma. If it were to remain only in those place it would face dwindling returns in support and financing. Those can only be maintained by moving into the urban centers where it can challenge the Iraqi government, gain headlines by attacking large civilian targets, and have access to money via businesses and services. Musings On Iraq’s own data supports Knights’ argument. It found IS most active in central Iraq, especially during the summer where there was a mini-offensive. Since then it has largely withdrawn from Salahaddin, and increased its operations in Ninewa. Already the group is making attempts at re-entering Iraq’s cities with recent car bombings in Tikrit, Mosul, Kirkuk, and Fallujah. The group’s rebuilding is only in its infancy however. The directions and decisions it will make can only be guessed at, but it is attempting a comeback and still presents a threat to Iraq that doesn’t appear to be going away.