Maxwell Markusen from the Center for Strategic and International Studies (CSIS) recently released a report, “The Islamic State and the Persistent Threat of Extremism in Iraq,” which provided new data on Islamic State operations in Iraq. The statistics showed that the insurgents are rebuilding in central Iraq and targeting the security forces more than civilians.


Markusen used numbers collected over the last three years by CSIS that showed that the Islamic State is attempting a comeback in Iraq. In 2016 when the Islamic State was beginning to lose some of the main urban centers it controlled there were an average of 60 attacks per month. In 2017 when the war was finally coming to end there was an average of 90 attacks per month. In 2018 IS no longer holds any territory within Iraq, but they are carrying out more attacks than 2016 with an average of 75 per month. 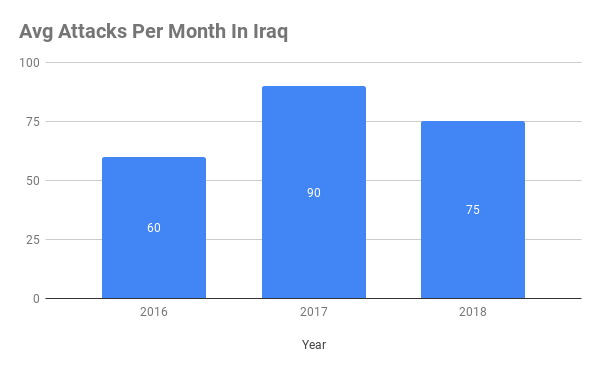 Most of these attacks are concentrated in central Iraq in the core provinces of Diyala, Kirkuk and Salahaddin. In 2018, There were 141 incidents in Diyala, 166 in Salahaddin and 197 in Kirkuk for a total of 504. That compared to 237 in Anbar, Babil, Baghdad, Irbil and Ninewa. Overall, 68% of incidents were occurring in the center of the country. This is a trend Musings On Iraq has noted for several months now. These three governorates not only neighbor each other and allow the insurgents to move back and forth between them, but they also include large rural and mountainous areas which either make it difficult for the security forces to enter or there is little presence there to begin with. An added factor is that after the central government took over the disputed territories in retaliation for the Kurdish independence referendum in October a large zone has been left largely unprotected. All together this has allowed space for the Islamic State to operate in largely unencumbered by the government.

Kirkuk is an example of these trends. Much of the province used to be protected by the Peshmerga, but after October the Iraqi forces took over. There is now few federal forces in the two southern districts, which is largely rural. Security has also deteriorated in Kirkuk city since the changeover. That’s shown in the attack data with 93 incidents in 2017 going up to 197 in 2018. 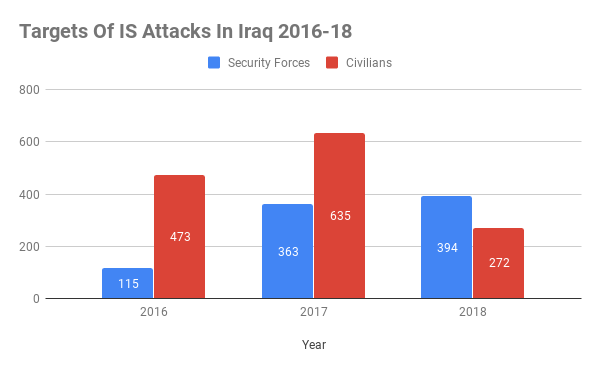 CSIS’s paper is just the latest warning that the Islamic State has not gone away. While it was defeated on the battlefield in 2017, it maintains a presence in Iraq, especially in Diyala, Kirkuk and Salahaddin into 2018. The question is whether the Iraqi government will be able to contain this threat and wear it down or whether the Islamic State will be able to metastasize again into a major insurgent and terrorist organization once again.

Markusen, Maxwell, “The Islamic State and the Persistent Threat of Extremism in Iraq,” Center for Strategic and International Studies, November, 2018