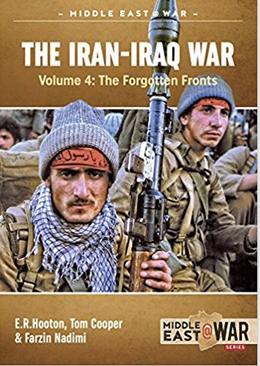 The Iran-Iraq War, Volume 4: The Forgotten Fronts was the final volume in Helion’s series on the longest and bloodiest war of the 1980s. The first three books focused upon Basra and southern Iran, which was the main battlefield. The last volume is about the central and Kurdistan fronts, and the Kurdish and Iranian opposition parties. The center and north were largely used for screening or diversionary attacks, but was also where the war ended. The fighting also involved the struggle between various Kurdish groups that were often fighting each other as much as the Iranians or Iraqis. Volume 4 is a fitting conclusion to the series with a very in depth review of the war with plenty of pictures and maps.


Central Iran is actually where the conflict between Iran and Iraq began. In the summer of 1980 the two sides began bombing each other along the border. That escalated to the Iraqis seizing a few towns, which it claimed were in disputed areas. Saddam Hussein eventually decided to invade Iran believing that the government was weak after the revolution, and its military was purged. The goal in the north and center was to seize the frontier area to protect Kurdistan and Baghdad, while the main thrust was in the southern Iranian province of Khuzistan. Despite having overwhelming numbers and a clear advantage in heavy equipment, the Iraqis moved very slowly. The result was the Iraqis lost the initiative, had to withdraw from certain places, and settled down into a defensive position that would last for much of the war. The start of the war highlights the main causes of the conflict. Saddam believed Iran could easily be defeated due to the disruptions of the revolution, and his main goal was taking disputed areas like the border towns in the center and the Shatt al-Arab in the south. If Khuzistan province could be seized as well that would be an added bonus. The fact that the war went wrong right from the beginning, was also telling.

As the two sides settled down the center and north were mostly sideshows with a few exceptions. Much of the fighting was based around small towns, one main city, Mehran in Iran, and mountains and passes in Kurdistan. Iran would often attack in the center to recapture lost territory, but mostly to try to draw Iraqi forces away from the south. Operation Fatah in March 1982 for instance destroyed an Iraqi salient around Fakkah, Iran before a much larger attack in Basra. That was a huge success for Iran, but usually the Iranians would make limited gain, which it couldn’t exploit, and then the Iraqis would counterattack. Eventually the Iranians were able to regain almost all of their land, and invaded Iraq making small gains. In Kurdistan the fighting was much harder due to the territory which was marked by high mountain ranges and deep valleys. Things finally changed in 1988 when Iraq launched its last offensives in the center to destroy the Iranian forces so they would not be a post-war threat and to force Ayatollah Khomeini to agree to end the war. The fighting here was again a microcosm of the war overall. The Iranians were quite good in their initial attacks, took back hundreds of kilometers of land, and made small incursions into Diyala and Iraqi Kurdistan. The problem was these tactical victories resulted in no strategic successes. The war finally ended when Iraq got its act together and was able to launch large operations and use its heavy weapons to overwhelm the Iranians, which convinced its leadership it could not win.

These two fronts also involved the Kurds and the Iranian opposition group the Mujahdeen e-Khalq (MEK). At the start of the war, Iran made an alliance with the Kurdistan Democratic Party (KDP). Its first goal was helping Tehran eliminate the Kurdistan Democratic Party of Iran (KDPI), which was backed by Iraq. The group was successfully destroyed and thousands of its followers relocated to southern Iran. The Patriotic Union of Kurdistan (PUK) led by Jalal Talabani, which had broken away from the KDP and was a rival, believed it would be next, so it made a deal with Saddam. The KDP tried to undermine the PUK by reaching out to Syria, which was Talabani’s other main backer. In return, the KDP agreed to allow the Kurdistan Workers Party (PKK) to set up camps in its territory in northern Kurdistan to attack Turkey, which was a regional rival of Damascus. Turkey would then carry out a series of raids into northern Iraq to not only attack the PKK but sometimes the KDP as well. The PUK would eventually break with Baghdad and join Iran, and it and the KDP took part in various Iranian offensives. The most famous was the taking of Halabja in eastern Iraq. That led Baghdad to retaliate with chemical weapons that killed thousands of civilians. The Iraqi effort against the Kurds was so poor that a massive campaign was later launched in 1987 to wipe out the PUK. This became the Anfal campaign in 1988 that used chemical weapons, forced relocations, and executions to destroy the PUK and KDPs bases and push them both out of Iraq. Thousands died as a result, and around 250,000 were displaced or became refugees. Finally, the MEK was part of the Iranian revolution, but quickly had a falling out with the clerics and went into the opposition and exile, and found support from Saddam. At the very end of the war, it decided to try to take a bit of Iranian territory, but was crushed. This was the main way that the two fronts were different from Basra. They included the political struggles of the Kurds that involved Iraq, Iran, Syria and Turkey. It also reflected the internal struggles amongst Iranians that arose from the overthrow of the Shah.

Volume 4 is the shortest in the Iran-Iraq War series, but maintains the high standards set by the previous ones. The book is printed on large paper with small print, which allows a lot to be covered in a few pages. The descriptions of the campaigns go down from the corps to the brigade level, describe the planning, the fighting, and then the outcomes. There are plenty of pictures, mostly from personal collections which means they have not been seen before. There are also colored drawings of various vehicles and helicopters used in the conflict by both sides. The one drawback is that all the maps are placed at the back, which means a reader has to shift back and forth from the text to the back to find out where the combat was happening. In four short books, Helion was able to collect one of the most in depth descriptions of the operations that took place during the eight year long Iran-Iraq War. This is long overdue as only recently has this war been thoroughly explained.