There was a large drop in reported incidents from October to November 2018. The number of incidents dropped roughly 30% between the two months. The number of casualties likewise went down as well. The bad weather which has caused flash flooding through much of northern and central Iraq might have played a role.

There were 155 Incidents reported in Iraq in October 2018. That was down from 222 in October. That averaged out to 5.1 incidents per day in November compared to 7.1 in October. November had the lowest total and average incidents of any month in 2018. There have been torrential rains and many cities have been flooded as a result. That could have accounted for the sizeable drop in attacks during the month. 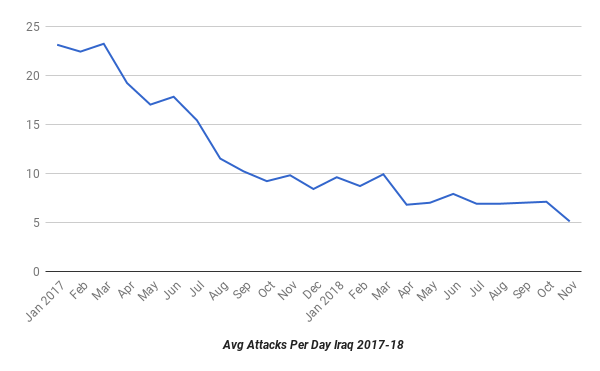 For the previous four months Baghdad had the most incidents of any province. In November, Diyala had 35 incidents with Baghdad coming in second with 32. Attacks in Baghdad are important because they show that the Islamic State is moving back into the center of the country. Traditionally, the insurgents have hit the capital to sow terrorism and undermine the standing of the government. For four months, IS was increasing its operations in Baghdad showing that it was a new target. That subsided in November.

There were 290 reported deaths in November. 93 bodies were discovered in mass graves during the month leaving 197 violent deaths. That included 2 Peshmerga, 14 Hashd al-Shaabi, 21 Iraqi Security Forces (ISF), 69 Kurdistan Workers Party (PKK), and 184 civilians. 151 were wounded made up of 3 Peshmerga, 17 Hashd, 26 ISF, and 105 civilians. Ninewa had the most casualties with 135. That was because 69 bodies were found there in four sites, victims of when the Islamic State ruled large swaths of the governorate.

Incidents in Anbar have remained very low. There has been less than 1 incident per day on average since October 2018. In November for example, there was only an average of 0.2 incidents per day. However in the last few months IS has been carrying out more serious attacks like suicide and car bombs. That fell off in November. 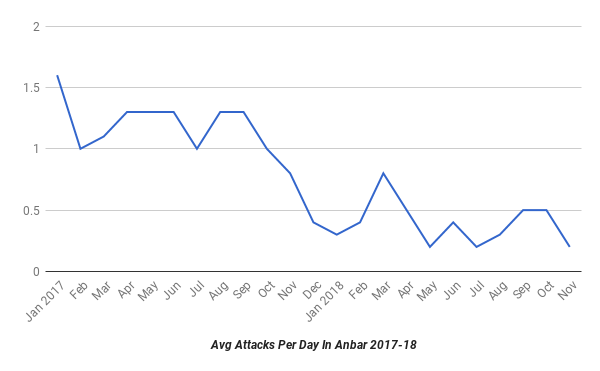 Central Iraq is where the Islamic State is rebuilding. Attacks remained the same in Diyala at an average of 1.1 per day from October to November. In Kirkuk however, incidents went from 1.5 per day in October to 0.6 in November, and went up just a fraction in Salahaddin from 0.5 in October to 0.6 in November. Overall, there were 72 incidents between the three provinces in November versus 99 in October. November’s attacks included two car bombs in Salahaddin, 9 gun battles with the security forces, 4 attacks upon checkpoints, 1 assault upon a mukhtar, 4 kidnappings, and 4 attacks upon towns. The situation in these areas has gotten so bad that there are more and more reports of militants walking around out in the open during the day. They are collecting taxes, taking on the local security forces, and going after villages that do not comply with their rules. In turn, they have been able to intimidate the locals enough where little good intelligence is being passed along to the government to counter IS’s rebuilding. That’s seen by the fact that there were 5 security sweeps in Diyala, 3 in Kirkuk, and 2 in Salahaddin, but they rarely find any IS members. Instead there are plenty of weapons caches discovered, but the insurgents have moved on to other areas waiting for the security forces to leave and then move right back after they’re done. IS is now effectively in control of most of the rural areas of Diyala, southern Kirkuk, and central and northern Salahaddin. 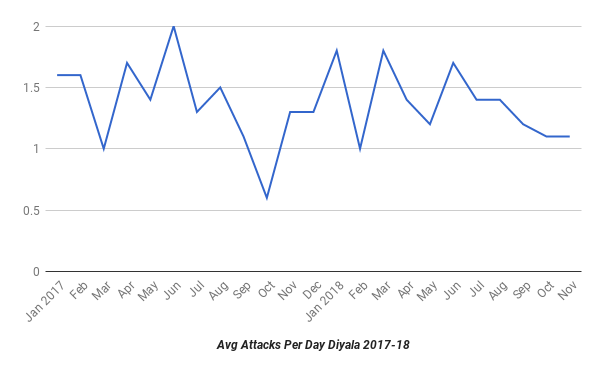 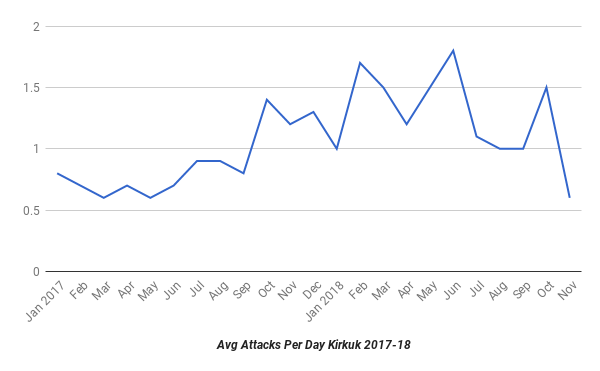 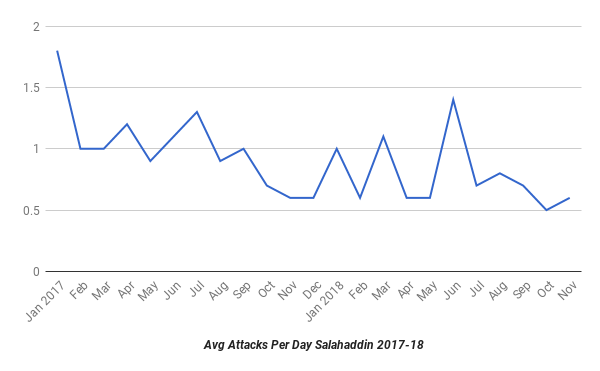 Another area where IS is making its presence felt once again is Ninewa. Like Anbar, the number of incidents is still very low, 0.8 incidents per day in November, but the types have changed. In November, there were 2 gun battles with the security forces, an attack upon a checkpoints, 3 towns were assaulted, and there was 1 car bomb. The last two are signs that the insurgents are attempting to assert control over rural areas and returning to terrorism. 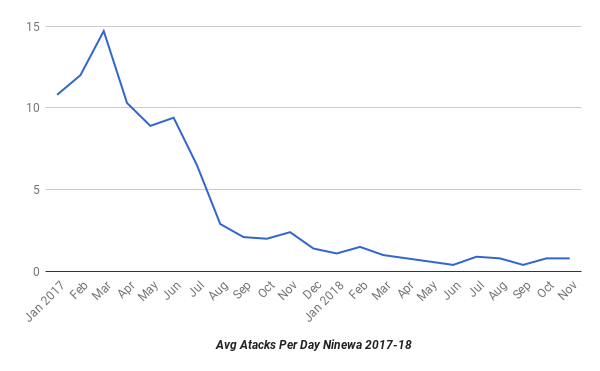 In the last two months there was a surge in mass casualty bombings in Iraq, but that went down in November. In August there were 3 such attacks, going up to 8 in September and 5 in October, before going back down to 3 in November. Again, the weather may have been a deterrent to these types of operations. What is still worrying is that these are now going off in urban centers instead of towns like they were before. In November, Mosul and Tikrit were hit by vehicle bombs along with Shirqat in northern Salahaddin. The militants had not been able to infiltrate any major city for months now, so this is not a good sign. If this continues Baghdad will likely be the next target.

69 members of the PKK along with 3 civilians were killed in 17 Turkish air strikes in northern Iraq. In October, 85 PKK members were killed in 7 bombing missions. Ankara is consistently pounding the group’s positions every week to put pressure on it now that Turkey’s ground assault into Kurdistan ended a few months ago.