The National Democratic Institute released a new public opinion survey on Iraq. It was conducted from August to October 2018 and included 3,804 interviews in all 18 provinces including people in displaced camps. The results showed the highest levels of pessimism since 2007 when Iraq was in the middle of a civil war. That’s a surprising development since the country has just won a war against the Islamic State.

Over three quarters of Iraqis believed that Iraq was going in the wrong direction. 21% said it was going in the right direction versus 78% who thought the opposite. Broken down by region that negative view was held by 69% of people in Baghdad, 75% in the west, 80% in the south, and 91% in Kurdistan. Kirkuk was the most positive at 40%, followed by 34% in Basra and 31% in Baghdad. Wasit, Anbar, Sulaymaniya, Salahaddin, Qadisiya, Babil, Dhi Qar, Najaf, Karbala, Irbil and Dohuk were all at 20% or less however showing widespread disillusionment across the country.

Is Iraq going in the right/wrong direction?

Those were the worst numbers since August 2007 when 78% felt Iraq was worse off. At the time, Iraq was in the middle of a bloody civil war with death squads, militias, and the sectarian cleansing of Sunnis from Baghdad, Diyala, and the surrounding areas. In subsequent surveys the pessimism continued, but not to that extent. With the exception of February 2009, 40-65% of respondents believed Iraq was doing badly from March 2008 to April 2017. In December 2014 for example, just a few months after the Islamic State had seized nearly a third of the country only 59% of respondents felt Iraq was going in the wrong direction. 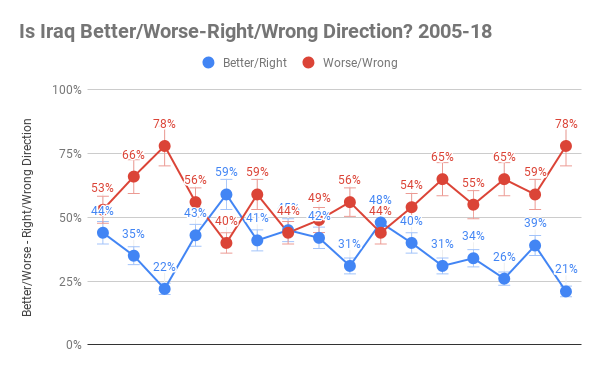 Things were a bit better when people were asked about their own province. The results were 42% believed things were going in the right direction and 56% wrong. In Baghdad (63%), South (66%), and Kurdistan (58%) people had negative attitudes, but in the west 59% thought things were going well. Western Iraq was a major battlefield in the war against the Islamic State. Most of the displaced have returned, cities like Ramadi and Fallujah are being rebuilt, and violence is at a historic low perhaps contributing to the positive view.

Is your province going in right/wrong direction?

Iraqis were split about their own situation. 42% said that they were more satisfied with their situation compared to six months ago against 56% who said less satisfied. When asked about six months in the future those numbers flipped with 54% thinking things would get better versus 39% who said it would be worse. Again, the west had a better attitude than the rest of the country with 56% saying they were more satisfied, the only area in the positive, and 66% saying things would get better in the near future, the highest amount and the only area above 50% besides Baghdad that was at 57%. At the same time, these were again the worst results since 2007 when 60% of Iraqis felt that things were going wrong.

Are you more/less satisfied compared to 6 months ago?

Are the following issues getting better/worse?

The widespread cynicism about Iraq and people’s personal situations does not bode well for the new Mahdi government. It would have to take some dramatic action to get people to change their opinions. The problem is the administration has been still born. PM Mahdi has neither a personal party nor a ruling coalition behind him. That means he is largely at the mercy of the two largest lists, one led by Moqtada al-Sadr and the other by Hadi Amiri who are opposed to each other and has deadlocked parliament over finalizing the new cabinet. Mahdi hasn’t made the situation any better as he has shown little leadership to resolve these differences. As a result the government has done little other than make announcements about what it wants to do. That's unlikely to sway the public any time soon.