Opinion Poll: Iraqis Split On Security And The Islamic State

The National Democratic Institute released a new survey that found Iraqis had split feelings about security. The poll was conducted from August to October 2018 and talked with 3,804 people across all of Iraq’s eighteen provinces and included people in displaced camps. While a majority felt the current security situation was good, they feared the Islamic State would return leading to things deteriorating in the future.

When asked was security better or worse in Iraq two thirds of respondents said things were going well, but that percentage had declined. Overall, 35% said things were worse against 62% that thought it was better. The later was down 16% from April 2018. In the west 63% felt things were better, along with 68% in Baghdad and 74% in the west. In Kurdistan however 67% believed security was worse. That was likely due to the federal government taking over Kirkuk and other disputed territories after the October 2017 independence referendum. That led to bitter feelings amongst many Kurds. It was also interesting that western Iraq had the highest positive view about security, even higher than the south, which has no insurgent attacks, but has suffered from growing tribal conflicts since many of the security forces were withdrawn to fight the Islamic State during the war. In comparison, the insurgency has nearly disappeared from Anbar with only an average of 0.2 incidents per day in November.

Two thirds of respondents believed that the Islamic State was the greatest threat to the country. 68% believed IS posed the gravest danger. Criminals came in a distant second at 18%, followed by tribes at 4%, and local Hashd units at 2%. The number of people seeing IS as a threat has grown. In April 2017 58% saw the militants as their biggest concern. In 2017 the war against the Islamic State was winding down with the last territories in Iraq being liberated. Today violence is at a historic low with IS focusing upon rural areas in central Iraq, yet the fear of its return has grown. That is a real concern as the group has emerged from the ashes once before after the Surge and is attempting to repeat that history once again. 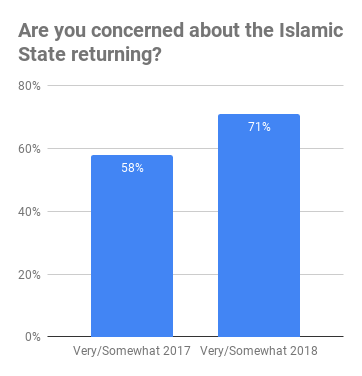 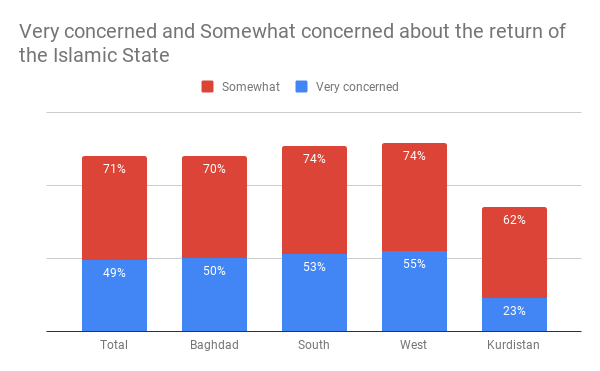 That explains the next set of responses where around 70% of Iraqis were worried that the Islamic State would make a return. Overall, 71% were very to somewhat concerned about the insurgents, a 10% increase from April. Baghdad, the south and the west all had similar responses from 70-74% being concerned. The south had the largest increase from April up 20%. In contrast, in Kurdistan fears of IS went down 12%. Again, Kurds appear to be more concerned about the central government than the militants due to the aftermath of the independence referendum. 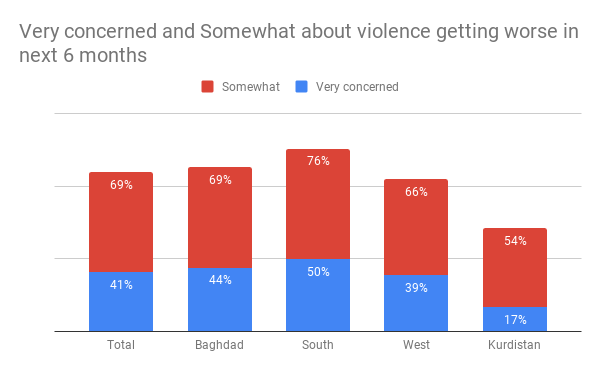 Finally, 69% of Iraqis said they were concerned that violence would get worse in the next six months. The highest percentage was in the south at 76% and Kurdistan was the lowest at 54%.

It would appear that Iraqis in the poll felt good about the current security situation, but were weary about what could happen in the future. The Islamic State remained the major concern, and fears that it would come back are still alive and well, and actually increased over the last year. It’s interesting that the south was the most worried region, yet it is one of the least likely areas to be attacked. Perhaps they believe that it will be the men of the south that will have to go fight again if IS makes a return.