Review The Future of Kurdistan in Iraq 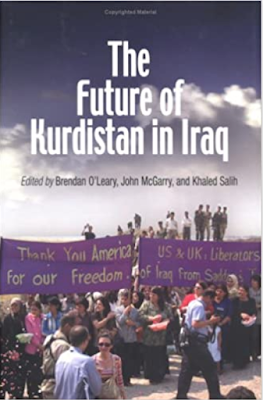 The Future of Kurdistan in Iraq is part out of date, part valorizing, and mostly bad. It emerged out of two conferences, one in Denmark in 2002 and a second in Washington D.C. in 2003. Nearly half of the book is about what the Kurds should have asked for under the new constitution which was decided in 2005. Then there are chapters that are irrelevant because they are just cheerleading. That means there are very few sections worth reading making the book unnecessary.

The first part of The Future of Kurdistan in Iraq is of no interest to current readers because it deals with negotiations over the 2005 constitution. There are several authors who argued for what type of system the Kurds should have demanded when drafting the document. They ended up getting most of their needs met such as Kurdistan being recognized as a region rather than three separate provinces which some authors were worried about.

Other chapters are also seemingly irrelevant as well because they are just praising the Kurds. The opening for instance claims that the two main parties the Kurdistan Democratic Party (KDP) and Patriotic Union of Kurdistan (PUK) were ready to rule the Kurdish region after the 1991 Gulf War. Then notes the two parties went to war and ended up running separate administrations because they distrusted each other so much. It also argued that because of Kurdish oppression the Kurds should be able to dictate their terms in the new Iraq. It misses the fact that the Shiites also felt oppressed and as the majority should govern the country. The author was setting up a situation where communities would be arguing over who was the biggest victim which could never be resolved.

The chapter by Gareth Stansfield is the only one that takes a critical approach while still noting what the Kurds achieved. He writes for instance, that the KDP and PUK were creatures of their leadership who made the ultimate decisions not the regional government. That meant after decades of struggle with Baghdad over the future of Iraq the Kurds were never able to form a real effective political organization instead relying upon personalities and families.

There’s another good chapter by Michael Gunter about Turkey’s changing stance towards the Kurds. At first, they tried to ignore the Iraqi Kurds. Then under President Ozal and the aftermath of the Gulf War opened up to the KDP and PUK only to reverse course after his death. Gunter succinctly writes that the Kurds had to have friendly relations with Ankara because while the U.S. would only have a temporary presence in Iraq, the Turks would always be neighbors.

Finally, there are two pieces by Peter Galbraith. Nowhere does it mention that he worked for the KRG as an advisor and therefore had a vested interested in arguing for Kurdish independence. He writes that the Shiites wanted to create an Islamic state in Iraq and many were pro-Iran. The Sunnis on the other hand were supporting the insurgency and wanted Iraq to be an Arab state. That meant the country was heading for a civil war. This led to his main point that Iraq should either be a loose federation of a Sunni area, a Shiite area and the KRG or the Kurds should simply be independent. It’s only mentioned in passing but not emphasized enough that the KRG was not economically viable and all its neighbors plus the U.S. were opposed to the Kurds breaking away. Galbraith said that the Kurds could get Kirkuk province and its oil which would fund Kurdistan but there was no way that was a given. In effect, Galbraith’s vision would lead to a KRG that couldn’t pay for itself and would be surrounded by hostile neighbors making it impossible to be a viable state. Bringing that up was not what he was paid for however.

Overall, there’s no real reason to buy The Future of Kurdistan in Iraq. There’s no reason to read the majority of chapters and more importantly there are much better releases to understand the Kurds and their situation in Iraq.