Violence went back to its usual low level during the second week of May. The previous weeks saw the Islamic State’s annual Ramadan offensive and attacks spiked. That’s now over and security incidents are back to normal.

There were a total of just 9 security incidents reported in the media in Iraq from May 8-14. That compared to 31 the week before. 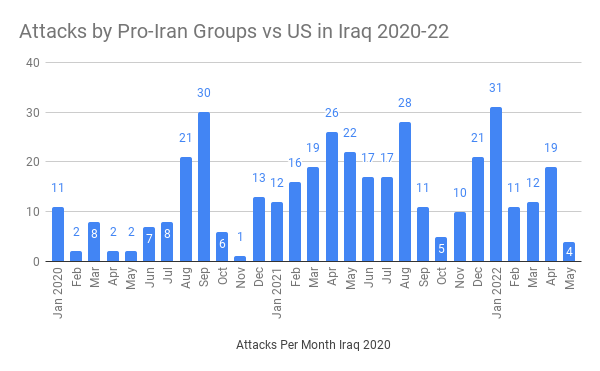 There were two incidents by pro-Iran groups. A convoy working for the Americans was bombed in Diwaniya and a drone was shot down over Camp Speicher in Salahaddin. Attacks by these groups went up in April with 20 incidents but have gone back down in May. There have only been 4 successful attacks by these factions during this month.

There were only 7 incidents by the Islamic State during the week. There were 27 the week before as the group’s Ramadan offensive was winding down. Before that attacks had been in single digits each week for months.

They caused 2 deaths, 1 civilian and 1 member of the Iraqi Security Forces (ISF), and 7 wounded, 1 civilian, 1 Peshmerga, and 5 ISF. All the casualties happened in Diyala.

This week was different from previous ones as most of the incidents were offensive in nature. A police chief’s house was shot at in the Muqdadiya district in central Diyala. A Hashd commander had his home bombed in the Dibs district in southern Kirkuk. Finally, there were two clashes with insurgents in Salahaddin. The other three incidents were defensive meant to keep civilians and the government out of IS areas. None of the attacks happened in a city as the militants remain limited to the rural, mountainous and desert regions of the country where it has little impact upon the larger society.

Bas News, "Clashes Erupt between Peshmerga and IS in Tuz Khurmatu," 5/11/22

NINA, "An Armed Attack Targets The House Of The Police Chief Of Abo Saida District In Diyala," 5/8/22

- "A Civilian Killed Another Wounded In An Armed Attack East Of Baquba," 5/8/22

- "A convoy of logistical support for the international coalition forces was targeted with an explosive device in Diwaniyah," 5/11/22