The start of May saw a drop in attacks by the Islamic State. This might mark the end of the annual Ramadan offensive. There was low level activity by Pro-Iran groups during the week as well.

There were a total of 30 security incidents recorded in Iraq from May 1-7. That compared to 44 the last full week of April which was the peak of the Islamic State’s Ramadan campaign. 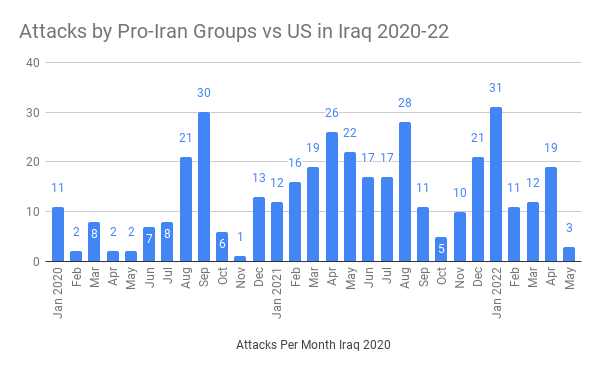 There were three incidents by pro-Iran groups. All occurred on May 1 when rockets were fired into two locations in northern Ninewa and into Irbil. All three were acts of political violence aimed at intimidating the Kurdish Democratic Party which is aligned with Sadr in government formation talks. Tehran is opposed to his plan for a majority government and has had its proxies carry out an intimidation campaign as a result.

That left 28 incidents by the Islamic State. Those occurred in Anbar (1), Baghdad (2), Diyala (11), Kirkuk (7), Ninewa (4) and Salahaddin (2). The last full week of April IS carried out 40 incidents. This decline is likely a sign that the group’s Ramadan offensive is coming to an end.

They left 8 dead and 25 wounded. 3 members of the Iraqi Security Forces (ISF) and 5 civilians were killed. 1 Hashd al-Shaabi, 1 Peshmerga, 11 ISF and 12 civilians were injured. Diyala had the most casualties with 19. The other provinces were in single digits.

The large jump in attacks has not changed the nature of most IS activity. A checkpoint in the Fallujah district was attacked. There was a shootout in the Baquba district of Diyala and another in Metibijia in Salahaddin. Mortars were also fired at the ISF in the Tuz Kharmato district of eastern Salahaddin. A convoy was fired at in eastern Salahaddin as well. That was 5 offensive operations out of 28. The other 23 were all defensive in nature meant to keep the government and civilians out of IS areas. Due to the declining state of the insurgency this is all the Islamic State can pull off these days. The group is down to survival mode. That means while it is able to carry out its annual campaigns it is still largely isolated to the rural, mountainous and desert regions of the country and has little impact upon Iraq.

- "ISIS targets a thermal camera for the Federal Police, south of Kirkuk," 5/2/22

- "The Popular Mobilization Forces repel an attack by ISIS gangs north of Diyala," 5/1/22

- "The Popular Mobilization repels an attack by ISIS in Saadiya, in Diyala," 5/3/22

- "A Security source: A missile attack targets eastern Mosul, and another missile platform was found in Bashiqa district," 5/1/22

- "Security Source: Two Soldiers Wounded In Anbar Attack And An Exchange Of Fire West of Mosul," 5/2/22

- "A terrorist was killed in a clash with the guards of a gravel and sand factory in Diyala," 5/4/22

- "Three Civilians Injured In A Bomb Explosion South Of Mosul," 5/7/22

- "Two civilians were injured by unidentified gunmen in Diyala," 5/6/22

- "Gunmen attack members of the Ministry of Interior and Defense in Diyala," 5/6/22

- "Three civilians were killed and injured in an armed attack north of Diyala," 5/2/22

- "Three soldiers were killed and injured in an ISIS attack in Diyala," 5/5/22

- "Thwarting an attempt to target a sheikh's house, southeast of Baghdad," 5/7/22