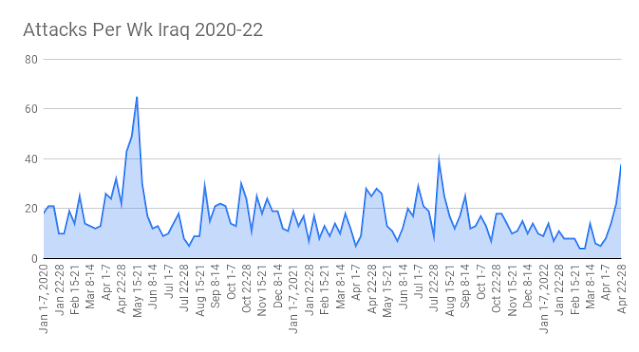 Violence took a large jump in Iraq during the 4th week of April. The Islamic State was in the middle of its annual Ramadan offensive while pro-Iran groups also stepped up their attacks a bit. That resulted in the most incidents since August 2021.

There were a total of 44 security incidents recorded in Iraq from April 22-28. that was the most since 44 during the first week of August 2021. 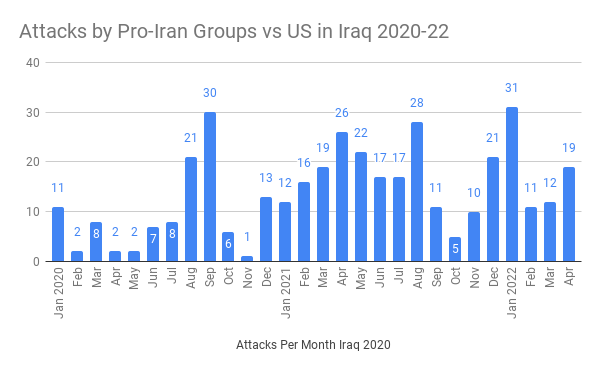 4 incidents were by pro-Iran groups. Convoys working for the U.S. were bombed in Anbar and Muthanna. Rockets were also fired at Turkish military bases in Dohuk and Ninewa. The camp in Ninewa has become a regular target. The one in Dohuk is something new showing that these factions are expanding their reach. Overall, there have been 19 incidents by these groups in April. That’s up from 12 in March and 11 in February. Attacks have increased as government formation talks have stalled. 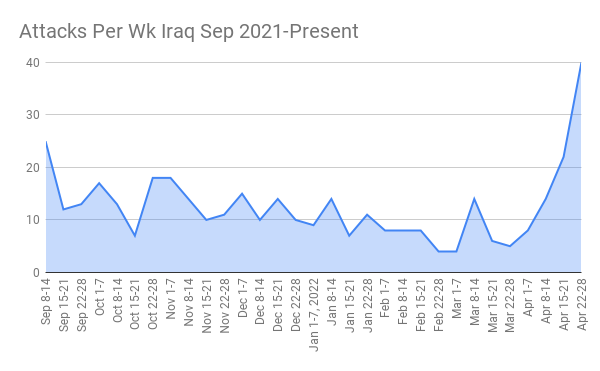 Attacks by the Islamic State have gone up each week of the month due to its Ramadan offensive. There were 8 attacks the first week of April, 14 the second week, 22 the third and 40 the fourth. The last time there was that many incidents was during the 2020 Ramadan offensive when there were 65 incidents the third week of May.

They resulted in 14 dead and 44 wounded. 1 Hashd al-Shaabi, 4 civilians and 9 members of the Iraqi Security Forces (ISF) were killed along with 8 Hashd, 10 civilians and 26 ISF being injured. Diyala had the most casualties with 17 followed by 14 in Anbar and 11 in Salahaddin. The other four provinces were in single digits.

There were 4 attacks in Anbar including two checkpoints being hit in the Rutba and Hit districts.

Mortars were fired at Camp Taji and a suicide bomber was discovered during a raid in Tarmiya who detonated his device killing two soldiers and wounding three more. The security forces routinely mention finding suicide belts during security sweeps but they rarely record any going off. The first week of April another belt blew up during a security operation. Both of these were in the northern section of Baghdad province with Tarmiya being a long time IS base. Despite that there hadn’t been any activity in the capital since January.

Three IEDs went off in Babil, one of which was a leftover from the war. The other two detonated in Jurf al-Sakhr which is a large Kataib Hezbollah base and a steady target of IS.

All 9 incidents in Diyala were defensive in nature. Four of those were checkpoints being attacked with IS trying to destroy thermal cameras. Two incidents were in the Muqdadiya district in the center, four were in Khanaqin in the northeast and the remaining three were in the north. These are all the normal areas IS operates in Diyala.

4 of the 10 incidents in Kirkuk were offensive. Those included two mortar attacks, a police station being assaulted, and an IED on the commander of the Federal Police’s 5th Division. There were also three shootouts with the army. All of these happened in the south which is a large IS controlled area.

The militants ambushed an army patrol in the Makhmour district of Ninewa. There was also a kidnapping and an IED.

In Salahaddin a suicide bomber was intercepted by the army, shot and then set off his device. There was one offensive operation when an ISF base was attacked in Dujail.

That was a total of 10 offensive attacks during the week. There were 3 the week before. Despite that increase it still showed the limitations of the Islamic State. It’s still incapable of really going on the offensive even during a major campaign and its networks into urban areas have apparently dried up. Almost all of its attacks are still focused upon keeping people out of its core areas. Those are rural, desert and mountain regions where there are few civilians and little government presence.

Al Masalah, "A missile attack targeting a Turkish military base in Dohuk," 4/22/22

- "The army thwarts an attack launched by ISIS on a military post northeast of Baquba," 4/28/22

- "A Civilian Wounded In An Explosive Device Explosion In Sinjar District, West Of Mosul," 4/24/22

- "A Convoy Of Logistical Support For The Int'l Coalition Forces Targeted With An IED In Anbar," 4/24/22

- "A Convoy Of Logistical Support For The Int'l Coalition Forces Targeted With An In Al-Muthanna," 4/23/22

- "The Popular Mobilization Forces Thwart An Infiltration Attempt By ISIS In Jurf al-Sakhr," 4/23/22

- "Video…A Suicide Bomber Blows Himself Up After Being Shot By Security Forces In Samarra Operations Sector," 4/25/22

- "The Iraqi army repels an attack by ISIS elements and targets them with mortar shells in Salahaddin,' 4/23/22

- "The Popular Mobilization Forces thwart an attack by ISIS southwest of Kirkuk," 4/27/22

Al Sumaria, "Two soldiers were wounded in an ISIS attack in Salahaddin," 4/28/22