Iraqi forces finally attacked the eastern axis of Mosul. Gogjali on the outskirts of the city was attacked on October 31 and freed the next day by units of the Golden Division. The Iraqi army liberated Shallalat, Samah, the Dijlah Mall, Qudus, Karama, Intisar, and Judaydat al-Mufti and Dweikhlah were attacked. Outside the city the army and Hashd took 9 other towns to the east and west of Mosul. The Golden Division appeared to be the farthest into the city, but was largely pushing ahead by itself leaving its flanks and rear exposed. That’s due to the collapse of IS defenses on the east side. Bazwaya for example, was supposed to take 2-3 days to clear, but only took 6 hours according to a Golden Division officer. 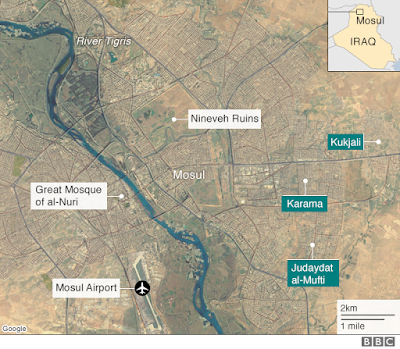 On October 31, the joint forces moved in close enough to Mosul to fire artillery onto the city, and that became a reality on November 1. CNN reported that the Iraqi military was shelling and carrying out air strikes on the city.

The last day of October ex-Ninewa Govenror Atheel Nujafi claimed his forces finally joined in the battle. Rudaw reported that Nujafi’s Hashd al-Watani fought alongside the 16th Iraqi Army Division on the northern front. That didn’t appear in any other Iraqi sources, which raised questions about whether it happened or was just a propaganda announcement since it would be a big story if it did. Nujafi was hoping that Mosul would allow his political comeback, but it has not worked out for him so far. If his armed group were able to liberate any part of Mosul it would be a big coup for him.

Asaib Ahl Al-Haq (AAH) again claimed that the U.S. was interfering with Hashd operations. Its spokesman repeated the claim that the Americans were trying to scramble Hashd communications, and added that planes were surveilling their movements and headquarters. Pro-Iran groups like AAH constantly spread these types of conspiracy stories.

For the second time, Badr’s Hadi Ameri made comments opening the door for the Hashd to enter Mosul. On October 31 he told the press that the Hashd had agreed to not enter the city, but that could change due to the situation on the ground or orders from Prime Minister Haidar Abadi. The Premier was the one that brokered the deal for the Hashd to not go into Mosul, so the latter would not happen. The former however could open the door to an assault on the city. Mosul is a huge military and political prize for all the forces involved. It is the capital of the Islamic State in Iraq, and its collapse in 2014 gave rise to the Hashd. Laying claim to taking the city itself would add great prestige to the Hashd, and is a constant temptation. In the Fallujah operation, the Hashd made a similar promise to not enter the city, but did at the end anyway, so the same thing could happen again.

In the Mosul area, IS carried out another execution and was preparing new defenses. The BBC reported that 40 former soldiers were executed in Shura south of the city. Locals said that IS was setting up new defensive positions in six neighborhoods in the north and south. At the same time, a Reuters story had life going on normally in the rest of the city. IS also attempted to bring people from Hamam al-Alil into the Mosul to be used as human shields. That was only partially accomplished because Coalition air power kept some vehicles from moving on the roads out of fear of being attacked.

Turkey’s President Recep Erdogan carried out his threat to move forces along the border near Tal Afar. Tanks and other military vehicles were deployed to the area on November 1. Erdogan claimed these forces were going to protect Turkmen in Tal Afar from Hashd terrorism.

Finally, the International Organization for Migration (IOM) released the latest figure on displaced. It had 17,916 people leaving their homes since the Mosul operation started on October 17. Many people have also gone home during the same period.

Al Masalah, “Amiri: Our mission is the liberation of our country and if necessary we will go to Syria,” 10/31/16

NINA, “Daesh establish defensive lines at the entrances to neighborhoods of Mosul,” 10/31/16

This Day In Iraqi History - Feb 26