Stahl, Dale, An Analysis of Hanna Batatu’s The Old SocialClasses and the Revolutionary Movements of Iraq, London: Macat, 2017 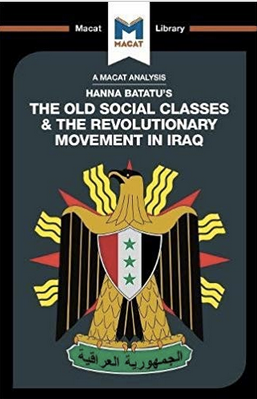 Hanna Batatu’s The Old Social Classes and Revolutionary Movements in Iraq is one of the most famous histories of Iraq from the Ottoman era to the after the 1958 coup. While it is widely talked about and citied in many books the problem is its size. The tome is 1,300 pages full of endless data, analysis and charts. That makes it a daunting challenge for the layperson to get through. Fortunately, Dale Stahl wrote this quick 78 page breakdown of the book.


An Analysis of Hanna Batatu’s The Old Social Classes and the Revolutionary Movements of Iraq is written like lesson plans for a class. The main points are summarized at the start of each chapter, and the book is divided into four broad categories. Those are a general introduction, what were the influences upon Batatu, the main ideas of The Old Social Classes, and its impact upon academia. While this makes it easily accessible, it also has some major drawbacks. The main problem is because Stahl is not dealing with the book as a whole, but themes in each chapter there is a lot of repetition. For example, he goes through the Orientalist ideas that dominated Western academia on the Middle East, that Islam had faded in the medieval era leading to centuries of stagnation, that there were no classes in Middle East countries, etc., and that Batatu broke these norms with his brook using a Marxian-Weber framework are said again and again in nearly every chapter in the first half. It makes what should be a very fast read tedious at times.

That being said, Stahl gets to the heart of Batatu’s book. Besides escaping the Orientalism, Batatu also based his writing on extensive interviews and archival research in Iraq, and brought in average Iraqis. Most previous histories, and many in the present are based upon British and American documents, and focused upon the elite. Batatu was one the first to view the country from the bottom up.

What Batatu argued was that traditional Iraq went through two major transformation under the Ottomans and then the British that broke up society and led to the 1958 revolution. The Ottomans brought social and economic changes to Iraq via technology like railroads and the telegram, and by attempting to break down the old social structures such as the tribes and rural areas by concentrating power and developing towns and cities. That challenged the “old social classes” of tribal, religious and local leaders, by creating new ones linked to the Ottomans and Europe, and whose power was based upon ownership of property. When the British invaded the area during World War I, created the Iraqi state, and placed it under colonial rule with the Mandate it brought about more drastic developments. The British created a new political class to rule, and empowered large landowners. On the other side of the coin land policies forced many peasants to migrate to the cities, while a new educated middle class was being formed. Both were marginalized by the elite, and they found few economic and political opportunities in the urban areas. That conflict between the growing poor and middle classes whose desires were unfulfilled led to protests, social activism, and the creation of new political parties such as the Communists and Baathists. Eventually they coalesced in the 1958 coup and the overthrow of the old Iraqi system. Overall, Batatu believed it was capitalism, that was introduced to Iraq during this Ottoman-British period that led to the transformation of Iraqi society, class conflict, and then a revolution. While there has been plenty of criticism of Batatu’s ideas over the years, his book cannot be ignored. In fact, it is the basis for many academic discussions and books to this day even if to take off in new directions.

If you don’t have the time and stamina to read 1,300 pages, and want to get a rundown of what The Old Social Classes is about this is where to start. You can read the book in one day, and despite the problems of repetition it lays out Batatu’s main ideas, its impact, and how it has affected present writing on Iraq.