Review State and Society in Iraq, Citizenship under Occupation, Dictatorship and Democratisation 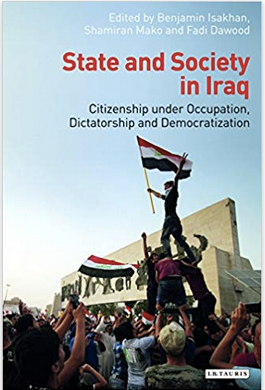 State and Society in Iraq is an academic anthology that attempts to take a new perspective on Iraq. Most histories focus upon elites, political parties, structures and institutions. This book takes a bottom up view to find historical currents that help explain the current situation in the country. The chapters cover a variety of topics from Assyrian refugees who settled in Iraq after World War I to the development of urban society in Baghdad and Kirkuk to the education system under the monarchy to how the Baath Party dealt with Islam up to the post-2003 elections and the Maliki government and the return of the insurgency. Like any anthology not all of the readings hold the same amount of interest, but there’s enough there to keep the reader going and the conclusions are interesting.


A few of the chapters highlight the approach and lessons learned from the book better than others. Fadi Dawood wrote about the Assyrian refugees that settled in Iraq after World War I. This group came from two distinct areas of Turkey and Iran, were broken down by tribes, and followed different leaders based upon religion and military prowess. The British segregated the Assyrians into a camp outside of Baquba in Diyala. The Assyrians became divided more and more inside the camp. The English also saw the Assyrians as fighters from their experience in World War I, and recruited them into a new Levies force to help secure Iraq. That along with the fact that the Assyrians were kept completely separate from the rest of the country in the camp led Iraqis to view them as foreigners and tools of British imperialism. In 1933, the Iraqi army massacred the Assyrians, which was celebrated by the government and populace. Rather than a monolithic group, the Assyrians could be divided by tribe, religion, and militarily. Many break Iraq down into Shiite and Sunni Arabs and Kurds, but just like the Assyrians that is not the totality of their identity. They are actually all diverse groups. The British policy towards the Assyrians was also rejected by the majority of Iraqis showing that plans imposed upon the country from the outside or top often don’t work out, and can lead to violent resistance.

Hilary Falb Kalisman discussed the dilemma education posed for Iraq under the monarchy and Qasim government. The British initially wanted to limit schooling during the 1920s fearing that an educated class would oppose its colonial plans and cause economic problems as they would not find much employment given the limited economy of the country at the time. From the 1950s-60s the government greatly expanded the number of schools from the primary to college level. The problem was that school had traditionally been a gateway to employment in the government. The demand for those positions multiplied exponentially with more studying, but there was a limited supply. That led to a wave of student unrest in the 1950s and 60s with demonstrations and protests and political activism by young people. This problem continues into the present day as the oil dependent economy has greatly limited the private sector, while there are thousands graduating from college each year still looking towards the government, but with no real hope of finding a job. That has led to protests every year during the summers as the public expresses their anger at unemployment and the general lack of good governance just as they did in the past. Iraq has a long history of resistance, whether it be via demonstrations to coups to insurgencies.

Finally, Amatzia Baram and Samuel Helfont deal with the Baath and religion. The party called itself secular but found that it had to deal with religion to rule. It had intellectuals engage in revising medieval Islamic history to at first justify its seizure of power in 1968 by pointing back to the numbers revolts that occurred in the past, to then switching to glorifying the Abbasid dynasty because it was Sunni, its greatness could be compared to the accomplishments of the government, and represented stability and the status quo, which is what party wanted to emphasize as it settled into power. Later Shiite opposition movements, the 1979 Iranian Revolution, and the Iran-Iraq War led Saddam to begin a policy to co-opt and control the Shiite clergy. The government took over the finances in Najaf and Karbala, limited the students going to religious schools, offered incentives to them and scholars to cooperate with the regime, and in turn put Baath members into those schools so they could become clerics and spread the government’s version of Islam. That was that Islam was part of the glory of Arab nationalism, which fit in with the party’s ideology. Baghdad proved widely successful with this policy using carrot and sticks to eliminate those that stood in the way, buying off others, and putting its own people into the institutions. This showed that the government often exploits the divisions found within society to apply its power. There are also always those that are willing to cooperate for a piece of the pie, which further separates society.

Overall, State and Society in Iraq is a bit inconsistent. Not all of the chapters provide new insights with some reading like pretty conventional political analysis. The fact that so many topics are covered however, allows people to pick and choose what to read if they like. The lessons learned are also important, because they give historical context to current events. Those are that foreign and top down state building, institutions and policies have often failed. That there is a long history of both peaceful and violent resistance due to the shortcomings of the government and elite. That the state faced with constant opposition has given concessions at one time, only to renege on them later to control and pacify groups. Finally, that Iraq should not be seen as just Sunni, Shiite and Kurd, but rather a diverse population with many different identities that overlap and often compete with each other. Basically, the whole overcomes the shortcomings of certain parts of this book.
- August 01, 2018