Review Gertrude Bell And Iraq, A Life and Legacy 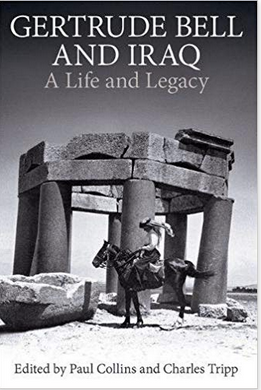 Gertrude Bell And Iraq, A Life And Legacy was the result of a conference held in 2013. Eleven authors turned their presentations into chapters for the book. A variety of topics were covered from Bell’s trips through the Middle East and her interest in archeology, to her place in women’s history, to her contributions in forming the Iraqi state, to her legacy in preserving Iraqi history. Due to the breadth of topics covered Gertrude Bell And Iraq is up and down with some chapters providing interesting insights into Bell’s life, while others are purely for specialists.


Like any compilation, Gertrude Bell And Iraq has its inconsistencies. Fortunately, most of the chapters provide good background to Bell’s life. Those include her views on the Ottoman Empire, her work on archeology in the Middle East, her relationship to the feminist movement of her time, and how she helped form the country of Iraq. All those chapters have some common themes. First, Bell came from a wealthy industrialist family. That allowed her to get a top college education at Oxford, and then travel throughout the Middle East, which eventually brought her to work for the British government and onto Iraq. Throughout her life she travelled through elite circles that shaped her status quo world view. For instance, while in England she joined the anti-suffragette movement as many in her class had contempt for the women attempting to gain the right to vote. Likewise, she looked down upon the Ottoman Empire, and had romantic views of what “true Arabs” were supposed to be like. Namely those in tribes in rural areas that she believed were largely untouched by Europe. Her explorations of ancient sites also repeated the leading archeological minds of Europe, which at the time were arguing that the Middle East influenced European culture rather than the old regime which focused upon Greece and Rome. Even when she found examples that contradicted some of these thinkers she stuck to their theories. Finally, when it came to the formation of Iraq she opposed to direct rule like England had in India, and believed that Arab nationalism could be harnessed with an independent Iraq advised by British officials. She believed that King Feisal, son of the Grand Sharif of Mecca, was the instrument to achieve that goal. However, when it turned out that Arab nationalism meant a fully sovereign Iraq without the British influence, she came to sour on Feisal, calling him weak willed because he was an Oriental. Overall, Bell was a creature of her class and upbringing. While she showed extreme independence, and made her way into the world of foreign policy and politics, which was exclusively male at the time, she was a conservative at heart. Her individual initiative didn’t lead her to support women’s suffrage. She held Orientalist views that the Ottoman Empire was backwards and weakened its inhabitants including King Feisal when he disagreed with Bell. While she believed in Arab nationalism it was only to keep Iraq within the British sphere.

Other chapters are more problematic or specialized. For instance, there is a chapter on Bell’s relationship with the Kurds. It claims that there was a growing Kurdish nationalist movement, which Bell opposed, and that she was only interested in including Mosul province, because it would add more Sunnis to Iraq, which had a Shiite majority. First, other Kurdish scholars would question that there was a nationalist movement in the 1920s. For instance, the author refers to Sheikh Mahmoud Barzanji as a nationalist leader, yet he appealed to his tribe and religious standing rather than a larger Kurdish identity. He also lacked support outside his home of Sulaymaniya and was opposed by other tribal leaders of the area. While Bell looked down at Iraq’s Shiites as religious driven and believed they were obstructionist because they opposed the new Iraqi state, there was no mention of the oil contained within Mosul province, which was the main reason why the British officials in London wanted it joined to Iraq. There are other chapters on Bell’s passage of an antiquities law, the founding of the first public library in Iraq and the national museum, which might only appeal to specific readers. The chapter on the library for example, talked about who was the director, how Bell got the books, and then what happened to the collection after Bell’s passing, something that may not be interesting to the casual reader.

Every anthology will have its strengths and weaknesses because they are made up of a variety of topics and authors. Most of the chapters in Gertrude Bell And Iraq provide a good introduction to the varied interests of Bell and her standing in history. They also come to similar conclusions about her ideology and views being shaped by the British upper class and imperialism. Bell was an extraordinary person who had a huge impact on the Middle East, which is the main message of the book.