Violence Slightly Down In Iraq July 2018


Violence took a dip in Iraq in July. Incidents were down in the center of the country where the Islamic State is rebuilding. There was a slight increase in attacks in Baghdad and Ninewa. Turkey’s operation against the Kurdistan Workers Party (PKK) was also in its fourth month.


There were 214 incidents reported in Iraq in July 2018. That was down from 239 in June. Baghdad had the most incidents with 49 which was a change. IS has not been as active there as it once was. The capital also led the month because there was less violence in the center. Attacks were down from June to July in Diyala (51 to 46), Kirkuk (56 to 37), and especially Salahaddin (42 to 23). Incidents continued to decline in Anbar and Babil as well. 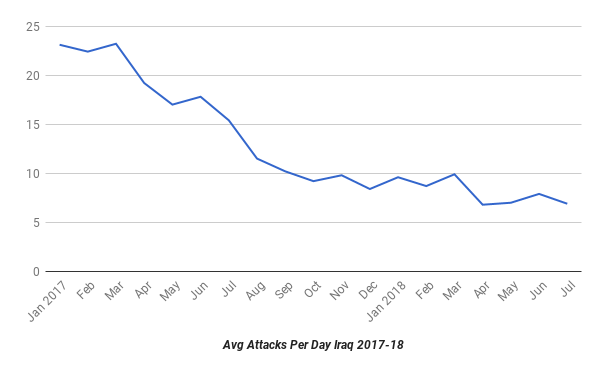 Casualties In Iraq By Province June-July 2018

There were 267 killed and 218 wounded in July. 45 bodies were found during the month leaving 222 violent deaths. 51 were killed in Kurdistan and southern Iraq. That meant there were 171 fatalities due to the insurgency.

Anbar, Babil, Baghdad, and Ninewa used to be some of the main centers of the insurgency. That has changed in the last few months. The Islamic State has largely withdrawn from those areas.

Since November 2017, there has been less than one incident per day in Anbar. Starting in 2018, there has been 0.5 incidents per day 6 out of 7 months with an average of only 0.2 per day in July. While there are continued reports of militants moving along the Syrian border they do not appear to be operating in the province itself. 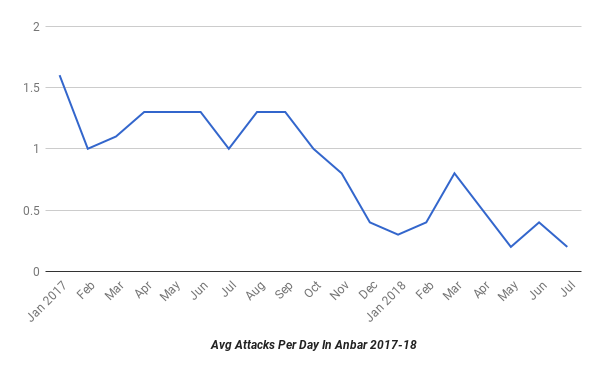 In the last half of 2017 it seemed like the militants were moving back into Babil. There were more reports of infiltrations from Anbar, and IEDs and shootings in the northwest became more common. That has completely changed this year with violence only occurring sporadically.

Baghdad was the main terrorist target for the militants, but again, that has fallen off this year. In January 2018 there was an average of 3.3 incidents per day. That has dropped to only around 1 per day from April to July. Another change has been the lack of mass casualty bombings which used to be a trademark of the governorate. 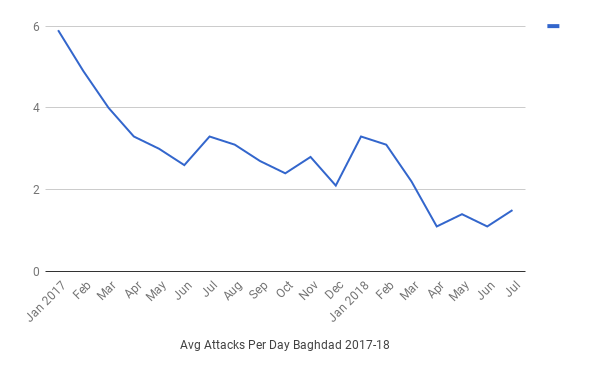 A similar situation is happening in Ninewa. From January to March there was around 1 incident per day. From April to July there have only been an average of 0.6. Like Anbar, IS is active along the Syrian border and occasional clashes, but nothing major has happened there for quite some time. 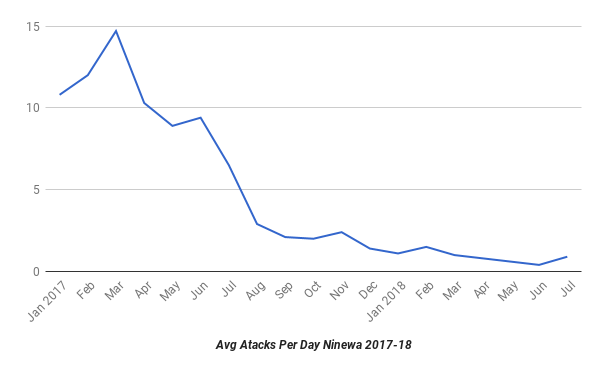 The center is now where IS is most active. In July, incidents in Diyala, Kirkuk, and Salahaddin were down from the month before, but things have ebbed and flowed before. More importantly, the type of attacks show they have expanded the scope of their operations. In all three provinces, the militants are attempting to regain control of rural areas, tax the locals, and intimidate and drive out the local security forces. In Diyala, there were 3 gun battles with the ISF and 3 attacks upon towns during the month. In Kirkuk, there was one shootout and a car bomb. That province is also different from others because the insurgents still have access to Kirkuk city and carry out regular attacks there. Finally, in Salahaddin, there was 1 confrontation with the ISF, 1 attack upon a village, and a suicide bomber. The Iraqi forces have been largely ineffective in countering this rebirth. During the month there were 12 sweeps and 2 major operations in the 3 governorates. The Islamic State simply moves out when the ISF moves in and then returns afterward. There is also a decided lack of intelligence and consistent presence in the districts where IS is operating in. This situation only bodes ill for the future. 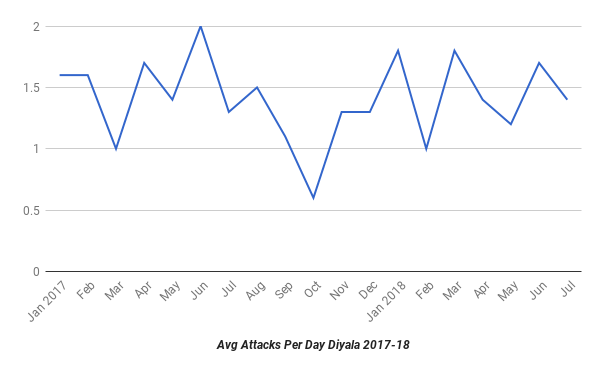 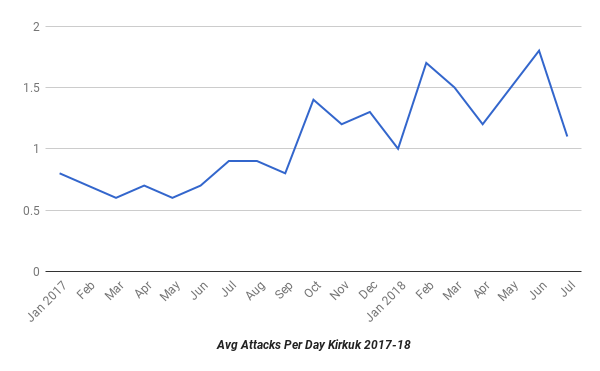 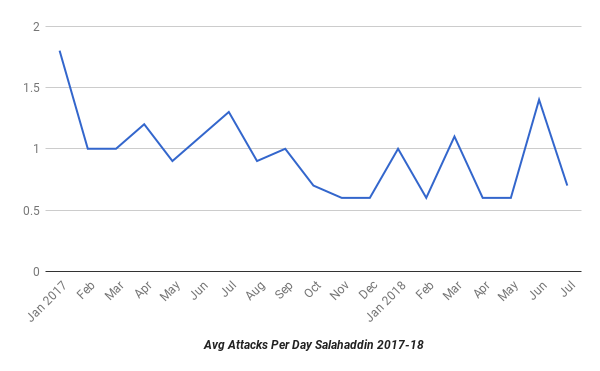 Finally, Ankara’s campaign against the PKK continued in northern Kurdistan. There was some talk that its forces were going to attack the Kurdish headquarters in the Qandil Mountains, but there has been little movement. Instead it appears that the Turks are consolidating their hold, building new bases, camps, and roads, while consistently shelling and bombing the area. As a result, a total of 42 people were killed in the month. That included 3 Turkish soldiers and 39 PKK members. This has been going on since March and Turkey shows no sign of stopping anytime soon.