Review Persian Gulf Command, A History of the Second World War In Iran and Iraq 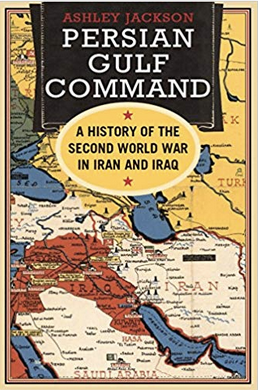 When historians cover World War II in the Middle East they focus almost exclusively upon North Africa with the Italians and Germans attacking the British in Libya and Egypt. In 1941, there was a war between the English and Iraqis. Afterward London ordered the invasion of Syria and then Iran to protect what was the empire’s leading source of oil, along with supply lines. This little known slice of the war is what Ashley Jackson wrote about in Persian Gulf Command, A History of the Second World War In Iran and Iraq. The problem with the book is that after covering the war and invasions, Jackson gets lost in the details. It’s like he spent all this time researching these topics and couldn’t help but share every little thing he found. That makes the second half of the book tedious to read.


Starting in 1940 there was a real Axis threat to Iraq and Iran. German diplomats, spies and nationals were active in both countries spreading Axis propaganda, and promising Arab independence from British imperialism. The early victories in the war along with resentment at London, which had run Iraq as a colony after World War I, and bolstered the Shah of Iran to gain access to the country’s oil made many Arabs and Persians believe that World War II would end soon with the Germans and Italians winning. In Baghdad, there was a coup in 1940 that brought Rashid Ali al-Gaylani to power. As premier he wanted to play loyalty to the Allies for British concessions. He was backed by the Golden Square, four colonels who were openly pro-Axis. Together they contacted Berlin and Italy, which promised to support them. Winston Churchill immediately saw this as a threat and ordered troops from India to land in Iraq in 1941 under the 1930 Anglo-Iraq Treaty. This became an excuse to overthrow the government, which was done at the conclusion of the Anglo-Iraq War, a short but sharp conflict that involved fighting across Anbar, parts of southern Iraq and Baghdad. Berlin and Rome provided a few squadrons of planes to help the Iraqis, but the Gaylani government had no real plan on how to confront the British and acted before the Axis could send any more real assistance. Afterward, the British swept into Syria which was controlled by Vichy France to eliminate its use by the Germans. In Tehran, the Shah refused to round up and expel Germans who were actively spreading Axis messages and spying. That led the British to invade from Iraq, depose the Shah, and put his son in power. Eventually, Churchill created a separate Persian-Iraq military command to secure the area from any future Axis threats.

The reason why Churchill felt Iran and Iraq were so important while the Axis were marching on Greece and across Libya were many. First, Iran and to a lesser degree Iraq were the major source of oil for the entire empire. Without the fuel it couldn’t fight. Second, the area was important part of the supply lines connecting Africa with Asia. For example, the English could ship troops from India to Iraq and then have them march through TransJordan and Palestine onto Egypt if the Suez Canal fell. Third, Iran neighbored the southern Soviet Union, which was initially seen as a threat, and then an ally that needed aid. The USSR had always had eyes for areas or northern Iran, and the Moscow-Berlin treaty that allowed the 1939 invasion of Poland initiating the war in Europe, spread fears that the Soviets might invade Iran. Once the Germans attacked the USSR in 1941, London came up with plans to assist their new friend, which greatly expanded when the Americans began the Lend-Lease program to send American supplies to the Allies. These were the strategic concerns of London during the early years of the war.

These topics cover just under half the book, and include the best chapters. Jackson gives a good run down of the threats Churchill was thinking of that led to the occupations of Iraq and Iran. He also covers why the Iraqis failed, namely Gaylani never had much popular support, which meant he couldn’t put up a real war effort against the British. He also acted before the Axis were ready to give any real support. There’s also coverage of the negative impact the Allies had on the two countries, namely widespread inflation and shortages that caused real hardships for the people.

The rest of the book has major problems. First, there is a huge amount of repetition about the war plans the British made. The German threat was still real until the end of 1942 meaning London would send in more troops, set up defensive measures, and prepare for a scorched earth campaign to deny the oil and infrastructure to Berlin. Then another commander would come in and do the same thing. Then Churchill created the Persia-Iraq Command, and it repeated the same measures. The author also goes into wild minutia. For instance, there’s a chapter on the impact of the Allied troops upon the two countries. The reader is told that Iranians and Iraqis had never seen so much vehicle traffic before and didn’t know how to react. That Bedouins would go through the trash left behind by soldiers. That old wooden pallets would be used for housing. That Polish soldiers liked drinking and were too loud, while there were lots of complains about misbehaving American troops. Like the coverage of the British military planning, this is simply overkill. Finally, Iran became the major route of Lend-Lease aid to Moscow. This isn’t really broken down until chapter 14 of 16, and then again gives too much information.

Overall, what Persian Gulf Command suffers from is a lack of editing. There could have been a large consolidation of like minded chapters, and serious mulling of facts. That’s a shame because the book got off to a good start.