Review The Tragedy of the Assyrian Minority in Iraq

Stafford, R.S., The Tragedy of the Assyrian Minority in Iraq, London and New York: Routledge, 2016 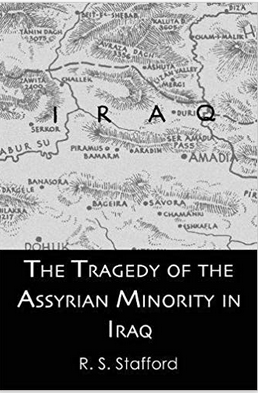 The Tragedy of the Assyrian Minority in Iraq was originally published in 1935 and covers the history of Assyrians in Iraq after World War I, and their massacre at the hands of the Iraqi army in 1933. It was written by R.S. Stafford who was a British officer stationed in Mosul province during that time period. It is a good source that documents those tragic events.


When reading a primary source it is always important to recognize the author’s point of view. First, being a member of the British military he backed England’s continued role as advisers to the Iraqi government, believing that Baghdad lacked the maturity to rule itself. That was based upon the fact that he looked down upon Iraqis and people of the Middle East in general. He constantly referred to eastern people as being short tempered and lacking rationalism, a typical Orientalist view of the region. Third, he was sympathetic to the plight of the Assyrians, seeing them as an embattled minority who suffered a great injustice in Iraq. That meant in his writing he is constantly demeaning the Iraqis, while trying to show how the English tried to help the Assyrians.

The book itself is divided into three broad sections. Those are how the Assyrians ended up in Iraq and the problems that caused, the events surrounding the murder of the Assyrians, and the aftermath. There was a small community of Assyrians in the flatlands of the Ottoman province of Mosul, but the majority of the community entered Iraq after World War I being refugees from Turkey and Iran. The Russians originally encouraged the Assyrians to rise up against the Ottomans during the war, and then later agreed to work with the British. This turned out to be a tragic decision as neither power provided much help, and the Assyrians were defeated forcing thousands to flee. They were put into a refugee camp in Baquba, Diyala. The majority wanted to return to Turkey or Iran. Some did, but neither country wanted them. Eventually they were dispersed to the Mosul governorate. Many ended up joining the British Levies, which were meant to be a transitional military force to secure Iraq while the English were drawing down and the Iraqi army was being built. They were used several times to put down Kurdish rebels. The heart of the problem for the Assyrians was that they did not want to be in Iraq, but were stuck there, while the Iraqis considered them foreigners who were tools of British imperialism. For example, many Iraqi officials believed that London would use the Assyrians as an armed force against Baghdad in the north. That all led to the tragedy of 1933.

Those underlying tensions led to a massacre. That started when a group of Assyrians tried to leave Iraq for Syria in the spring. They feared that the Iraqi government was plotting against them, they were not happy with their conditions in the country, and believed that they could find land in neighboring Syria. At the time, that country was a French Mandate, and Paris wanted nothing to do with the Assyrians. When they returned there were all kinds of rumors that set the stage for the killings. The Assyrians believed that the Iraqis wanted to disarm them, which was true, with the goal of attacking them. The Iraqis thought the French and British were launching a conspiracy against the government. Those fears appeared to be justified when a group of Assyrians attacked an army camp as they were returning to their homes. That led the army to assault the community. Around 60 villages were destroyed, hundreds of men, women and children were rounded up and executed, while local Kurds and Arabs looted villages and took part in the murders. Afterward, there were parades, promotions and honors given to the army for the massacre, while internationally, Baghdad denied there were any mass killings, and blamed everything on the local police and Kurds.

The whole affair represented the deep insecurities of the new Iraqi state. The British Mandate had only ended the year before in 1932. The Iraqi political class and army were mostly Iraqi nationalists and pan-Arabists who resented London’s continued role in the country, and believed the Assyrians its tool. There were all kinds of stories about British plots, and the army believed that killing the Assyrians would be an assertion of Iraqi sovereignty and strength against their former masters. Stafford placed the blame on the lack of leadership as King Feisal and his top ministers were away on a trip to England during the events. Due to his Orientalist view he believed the Iraqi politicians and officers to be petty and unable to make sound decisions without the King who Stafford held in high regard since he was allied with Britain. Given their ideologies however, the attack upon the Assyrians wasn’t short sightedness, but an expression of their resentment against the English. They were also following the example set by them to use force against unruly groups. It’s sad to see that the Iraqis fear of the British led to such wanton destruction of a minority group.

Overall, this is an important source on the Assyrian massacre. Stafford was in northern Iraq during the killings, and provides important details on what happened. He didn’t hide his biases either, so it’s easy to interpret his opinion on matters, and his style is short and direct, and the book is easy to digest in a day or two.