Islamic State Waits Out The Protests In Iraq


With the demonstrations in Iraq entering their second month the Islamic State has been holding off on attacks. With the government threatened, there is no reason for the insurgents to provide distractions. That resulted in the lowest average in security incidents since 2003.

There were 55 incidents total reported in the media in November. Pro-Iran Hashd were likely behind 4 rocket attacks targeting a base where U.S. forces are at and the Green Zone in Baghdad leaving 51 by the Islamic State, the lowest monthly total since the U.S. invasion. That averaged out to only 1.7 incidents per day. That was down from 68 incidents in October and 119 in September. Another sign of the changed environment was that there were no car or suicide bombs during the entire month, likely the first time that has happened since 2003. Before the protests started it looked like the militants were increasing their operations, especially in the capital, but that now appears to be on hold. Each time there have been similar social unrest in the country, IS has held back. 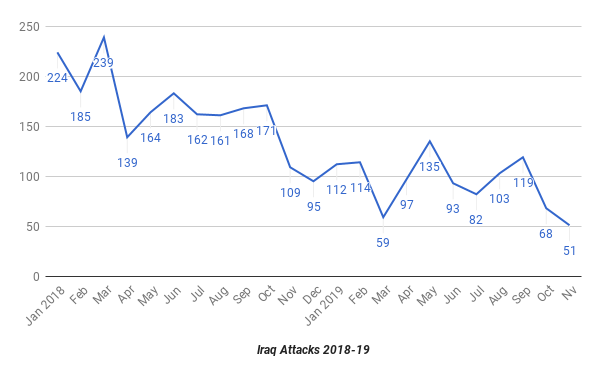 Pro-Iran Hashd factions sent a message to the Americans to stay out of the protests by firing a series of rockets during November and the month before. A base in Ninewa, and the Green Zone were targeted four times total. There were two more such incidents in October. Groups backed by Tehran have routinely sent ordinance at the Green Zone because that’s where the U.S. Embassy is. With the demonstrations entering their second month, this was likely telling Washington to stay out of Iraq’s internal affairs.

Before the protests the Islamic State was making a concerted effort to move back into Baghdad. In September, they were finally able to land some IEDs inside the city itself. In November the group planted two motorcycle bombs in Shaab in the north and Baya in the south. It also attacked a group of soldiers in Tarmiya, and posted pictures of executing a policeman in Masra, both in the outer northern region of the province. While there were only 9 incidents total by IS in Baghdad during the month, this showed that the organization is still attempting to rebuild its networks in the capital and strike into its heart. That is very important, because if the group can’t infiltrate into Iraq’s cities it will eventually become irrelevant. 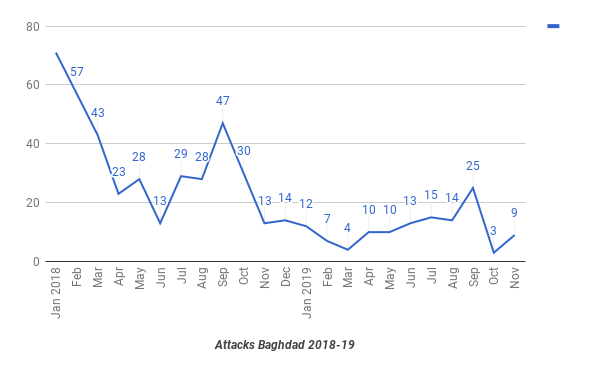 Diyala, Kirkuk, Ninewa, and Salahaddin are the insurgency’s main areas of operation. There were 13 incidents in Diyala, 11 in Kirkuk, 8 in Ninewa, and 7 in Salahaddin. In Diyala that included 1 gun battle, 1 attack upon a checkpoint, 2 kidnappings, and 2 attacks upon villages. More importantly four villages were emptied in the rural sections of the province due to IS attacks and threats. Even more were forced out in October. 5 Italian soldiers were hit by an IED outside of Kirkuk city, and three IEDs went off there at the end of the month leaving 16 wounded. One mukhtar was killed in Ninewa. In Salahaddin, an IED hit a joint Coalition-Peshmerga patrol that left 1 Coalition soldier and 4 Peshmerga wounded. There were also three shoot outs there as well. Diyala is the center for IS in the country. There the group is setting up camps and bases to rebuild its cadres in central and northeastern sections of the province. That’s the reason behind the emptying of villages. The same thing is happening on a smaller scale in southern Kirkuk. Ninewa and Salahaddin used to be major targets, but no longer as the insurgency is rebuilding. There are only occasional attacks in those two governorates as a result. 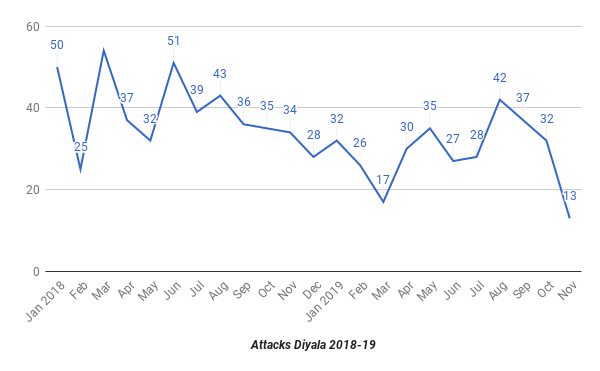 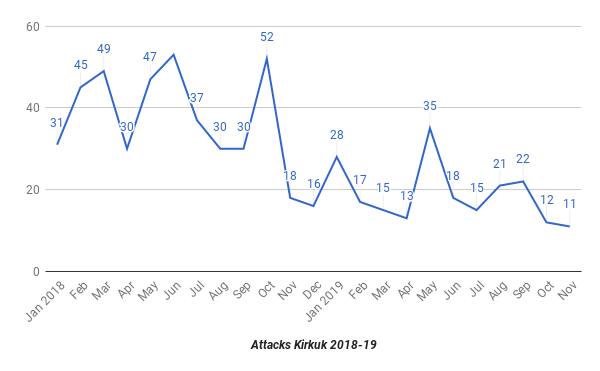 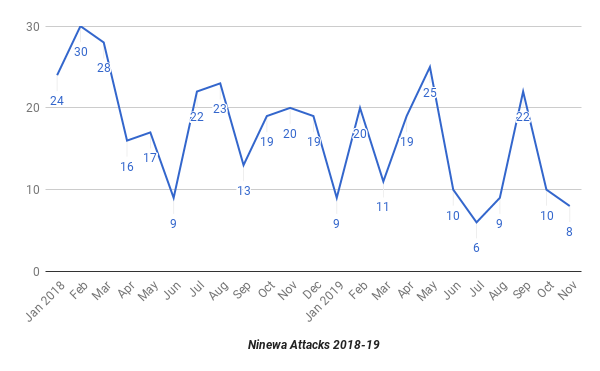 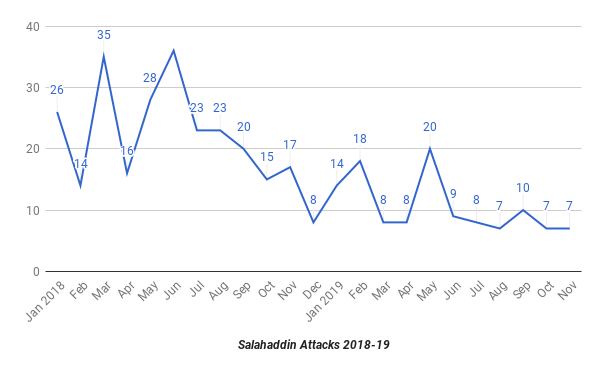 There was also a rare attack in southern Sulaymaniya by the border with Diyala. Mortar fire brought an Asayesh unit to investigate, which was then hit with sniper fire that killed 3, including a commander, and left 8 other wounded. IS forces likely came in from Diyala and set up this ambush to test the Kurdish defenses. That showed despite the dramatic decline in attacks overall IS was still looking to find new areas it could operate in.

Iraq Newspaper, "ISIS announces the execution of policeman Firas Ahmed and two others north of Baghdad," 11/25/19

NINA, "A Katyusha Rocket Land In The Vicinity Of The Green Zone, Causing No Casualties," 11/29/19
- "A Member Of The Popular Mobilization Forces Killed, Northeast Of Baquba," 11/21/19
- "Mortar Shells Fall On An Area Between Diyala And Sulaimaniya," 11/29/19
- "The Number Of Victims Of ISIS Attack On Al-Islah Village Has Risen To 9 People, Including An Officer, Soldiers And Civilians," 11/24/19
- "Security Sources Announces The Nature Of Targeting The Green Zone," 11/17/19
- "Unknown gunmen assassinate a mayor/Mukhtar/ in the right side of Mosul," 11/18/19
- “Villages On The Outskirts Of Khanaqin Are Experiencing A Wave Of Displacement For Dozens Of Families,” 11/3/19

Al Sumaria, "A member of the Peace Brigades killed and three others wounded in clashes with IS in Samarra Island," 11/22/19