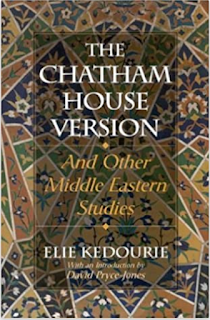 Professor Eli Kedourie of the London School of Economics was an iconoclast in Middle East studies. He was born in Baghdad in 1926 and went to university in England. He went on to criticize not only British policy in the Middle East, but western liberals and leftists, Pan-Arabism, and the Arab states. The Chatham House Version and other Middle-Eastern Studies was a collection of journal articles he published in the 1950s and 1960s with some new material added. The thesis of the book was that not only did London make a series of blunders in the region from World War I to its aftermath but that conventional history of the Middle East in England was wrong as well.


Kedourie begins with his critique of British foreign policy towards the Middle East. During World War I and its aftermath London decided it would support the break-up of the Ottoman Empire, Pan-Arabism and Zionism. The idea was that supporting the Sharif of Mecca Hussein and his Pan-Arab claims would help seize Ottoman territory that some British officials thought might even rival India in size and importance. The Arabs and Zionists would also block France’s claims to the Levant. Finally, the Zionists would get Palestine and the Arabs would have the rest of the Middle East united together in a loose Pan-Arab confederation. It doesn’t take the book to tell you those plans failed horribly. Kedourie points out that the war did end the reign of the Ottomans and the British did get some new territories like Palestine and Iraq, but the French still got Lebanon and Syria, the followers of Pan-Arabism turned out to be anti-European and anti-colonialsm, and didn’t lead to peace over Palestine or with Zionism. The Chatham House Version lays out all the discussions and papers that went into coming up with this failed strategy. Kedourie also shows that London still supported Pan-Arabism all the way into the 1950s even though it repeatedly led to calls to expel the British from the region.

There are a few chapters on Kedourie’s home country of Iraq that give more specifics on how the British miscalculated and the states they created were dysfunctional. After World War I the English created Iraq as a League of Nations mandate and put a small group of Sunnis in power over a Shiite majority and several minorities including Kurds, Assyrians and Jews, none of which were much interested in the new state. The British made no protections for those groups. The Shiites rose up against the British in the 1920 Revolt which was put down by force. The Kurdish tribes were consistently bombed to keep them in line. The Sunnis made sure these two groups were also largely shut out of the administration of the country. The Assyrians were massacred by the Iraqi army. During World War II the British didn’t stop a pogrom against the Jews in Baghdad and said nothing about laws in the 1950s that stripped most Jews of their citizenship and had the government confiscate their property. Politically the English created a democracy, but the king and the politicians were only interested in their own power. Elections were manipulated, politicians would start tribal revolts in power plays against their rivals, etc. all leading to constant instability and new governments. The Pan-Arab dreams of the monarchy and prime ministers would also lead to constant interference in Syria, Lebanon, Kuwait and Palestine. The British were proud of their creation and shocked when the monarchy was overthrown and done away with in a coup in 1958. The book made a convincing argument London had nothing to brag about. There were 35 different premierships from 1920 to 1958 for instance, and even more governments. The British realized right from the start that violence was necessary to keep the country together. Finally, London only imposed the trappings of democracy while giving power to an oligarchy. Again, Kedhouri goes into great detail into all the machinations of London, the kings and prime ministers of Iraq, and others to manipulate events and ensure their interests.

Besides overall British policy that started during World War I and Iraq, The Chatham House Version and other Middle-Eastern Studies covers many other topics. Lawrence of Arabia in Syria, Zionism and Palestine, Egypt, Pan-Arabism, minorities and Chatham House are all included. Most of the chapters are very engaging and show a wealth of research. There are some exceptions however. There are three chapters on Egyptian politics for instance, which include too many figures, and the reader can easily get lost in all the back and forth between them. There’s also a chapter on Christian Arabs and Pan-Arabism that’s not related to the overall thesis of the book. That being said Kedourie provides a very interesting history of British policy and the Middle East from World War I to World War II. The author definitely stood apart from the conventional wisdom and leveled some biting criticism.