April and May 2020 saw a large surge in violence in Iraq as the Islamic State launched its annual Spring offensive. Incidents reached 2018 levels across the seven provinces the insurgency operates in. That all ended in June however as there were only sporadic incidents across the country.

The Spring campaign pointed to two seemingly contradictory trends. First, the offensive showed the increased capacity of the militants. Since 2019 when the group lost its last bit of territory in Syria IS has been focusing upon preserving its personnel over carrying out attacks. It has been moving in men and material from Syria into Iraq via Anbar and Ninewa and largely avoiding confrontations. At the same time it was slowly building up bases and camps in rural Kirkuk, Ninewa, Salahaddin, and especially Diyala by driving out and intimidating the locals. That all changed in April when it unleashed a slew of attacks which only grew in the following month eventually reaching 2018 levels. The targets also shifted from soft targets like civilians or IEDs planted on roads to hitting the security forces. Even in June after the campaign was over the security forces continued to make up the majority of casualties. The goal is to establish military dominance over rural areas so that IS might be unimpeded in rebuilding its cadres. On the other hand, the Spring campaign highlighted the fact that the group is not ready for a serious return yet as it was only able to maintain its high pace. While the intensity of attacks rose dramatically in April and May, it didn’t have the men and material to sustain it past two months making for the shortest offensive in years.

The government also launched an aggressive series of continuous operations that went through some of the insurgency’s core areas. The Islamic State largely shuts down while the authorities are there and then returns afterward. The constant sweeps however has slowed its ability to come back.

There were a total of 60 security incidents reported in the media in Iraq in June. 7 of those were pro-Iran groups firing rockets in Baghdad, plus rockets discovered, that prompted a raid upon Kataib Hezbollah. That left 52 attacks by the Islamic State. After previous campaigns by the insurgency there has been a similar large dip. For instance, at the start of 2019 there were a spurt of attacks starting in December that ended in March with 59 incidents. Then in 2019 after the spring-summer campaign attacks went down to 51 in November.

Those led to 46 deaths and 68 wounded. 8 civilians, 16 Hashd al-Shaabi and 22 Iraqi Security Forces lost their lives while 17 civilians, 20 Hashd and 31 ISF were injured. As noted above, 89 of the 114 casualties were from the security forces. Diyala had the most dead and wounded at 41 followed by 37 in Salahaddin and 20 in Kirkuk. The other provinces were in single digits. 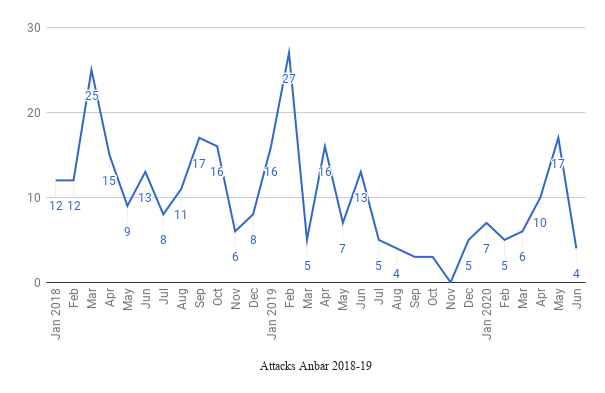 In Anbar there were four incidents the first week of June and then nothing for the rest of the month. Since the summer of 2019 attacks in the governorate have been rare, and June saw a return to that level after the spike caused by the Spring campaign. The government however has been focusing upon interdicting IS’s movement across the Syrian border and the province into other parts of Iraq. That resulted in 10 security sweeps in June. 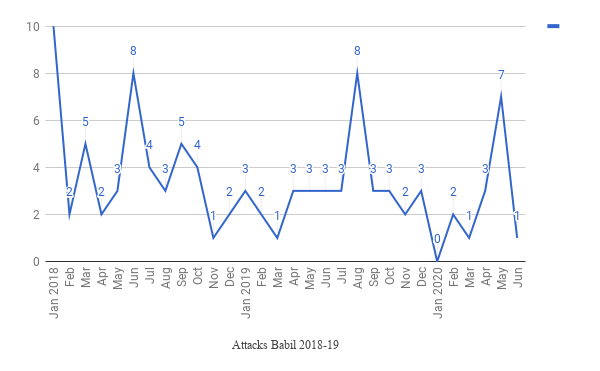 Babil had a similar experience with one IED upon the Hashd in the Jurf al-Sakhr district in the northeast, and then no other activity. Again, Babil has not been a priority for the insurgency in years. When it does strike there it is almost always in Jurf al-Sakhr which is empty of civilians and has been converted into a major base for Kataib Hezbollah. 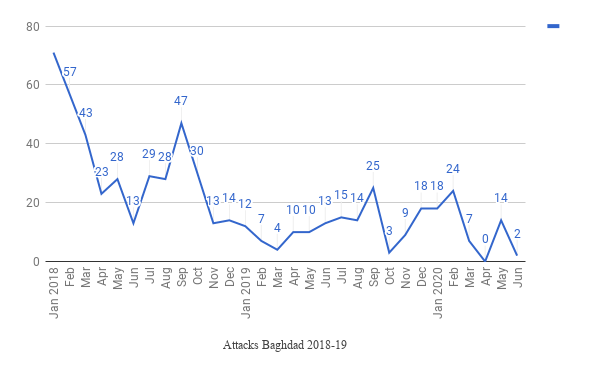 Last year it seemed like IS was intent upon returning to Baghdad. It slowly but surely built up its attacks and was even able to reach the city itself and set off multiple bombs on a single day several times. It looks like the group has changed strategy and is focused back upon the countryside instead as attacks have fallen off in the capital. There were 7 in March, 0 in April, then 14 during the Spring campaign, before dropping to 2 in June. Most of the incidents in the province last month were conducted by pro-Iran groups attempting to send a message to the United States that its personnel can be targeted and that it was not wanted in the country anymore. 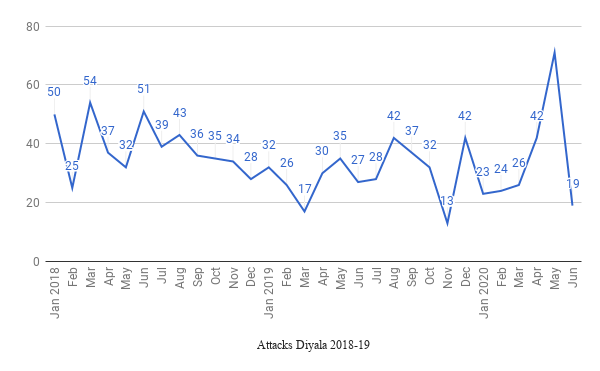 Diyala remained the main base of the Islamic State in Iraq. There were 19 incidents there, the most of any part of the country. 12 of those were in the Muqdadiya district in the center and the rest in Khanaqin in the northeast. The main targets were villages with two attacks and four hit by mortar fire. Officials in the province have consistently complained for months that the rural areas are bereft of security forces giving free reign to the insurgency which is driving people out and intimidating those remaining. IS has established de facto control of many of these areas. The government responded with 12 sweeps in June many going through core IS areas such as the Waqf and Sensil Basins in Muqdadiya.

The Islamic State has found cracks in the security coverage in the disputed area of Makhmour in south Irbil and is exploiting it. Starting in the spring IS began laying bombs and attacking the security forces in the area. In June there was one IED that hit an army convoy. This prompted the government to conduct two sweeps through the area at the end of the month. 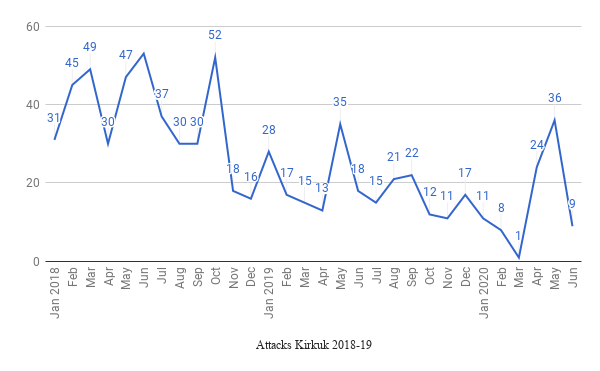 Kirkuk witnessed 9 incidents. Like Diyala towns were the main target with three fields burned, an attack upon a village and one hit by mortar fire. The militants also set up a fake checkpoint on the Kirkuk-Baghdad road and attempted to kidnap a Hashd Brigade commander, which failed. All the incidents were in the Hawija and Daquq districts in the south which IS was never expelled from during the war. The government had one sweep at the start of the month in the southwest along the Kirkuk-Salahaddin border where IS has camps. 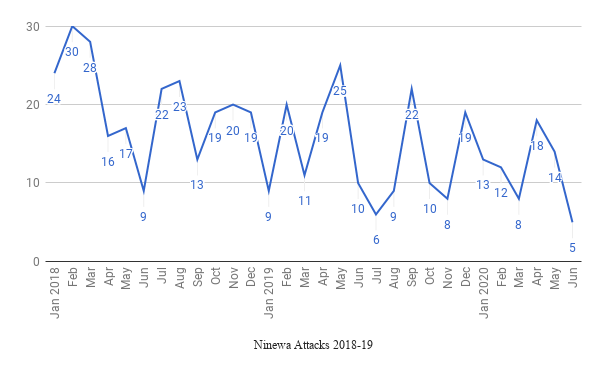 IS was only active in Ninewa during the middle of the month. All five incidents occurred during the second and third weeks of June. Unlike the rest of Iraq, those were bombs hitting civilians. Two occurred in and around Mosul while the rest were in Qayara sub-district south of the city. This province like Anbar only sees sporadic violence and is mostly being used to bring in men and material from Syria. 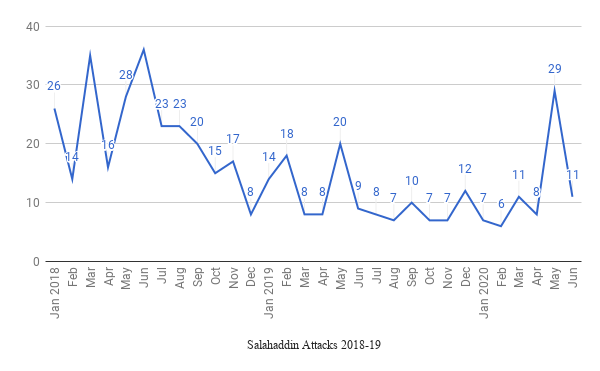 Finally, Salahaddin had 11 incidents, which was about average for the last year and a half. During the Spring offensive the militants made a return to the Tuz Kharmato district in the east, but largely moved away from that area in June with only 2 incident there. In June the incidents were spread across the governorate. Most of those were IEDs and shootings at checkpoints, but a Hashd base in the Samarra district was assaulted as well. Overall, the province has turned into a secondary front for IS where its main priority is to rebuild.