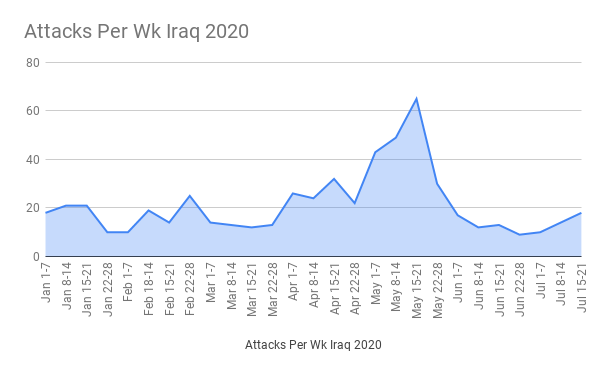 Security incidents have slightly ticked up the last two weeks but Iraq is still in a lull in between storms. With the Islamic State’s spring offensive over attacks remain in the teens until the next campaign starts.


There were a total of 19 incidents recorded in Iraq from July 15-21. One of those was by a pro-Iran Hashd group that fired rockets at the Green Zone. That left 18 by the Islamic State. That compared to 15 the week before and 10 the first week of the month. Despite the slight increase this was still the seventh week incidents were in the teens. The Islamic State still appears to be focusing upon rebuilding in Iraq rather than carrying out operations. Preserving its leadership and recruiting and training new cadres are the priorities.

17 people died and another 28 were wounded during the week. 4 Iraqi Security Forces (ISF), 5 Hashd al-Shaabi and 8 civilians lost their lives while 5 ISF, 11 Hashd and 12 civilians were injured. Diyala had the most casualties with 24 followed by 11 in Salahaddin, 6 in Baghdad, 3 in Kirkuk, and 1 in Ninewa. Since the spring IS has been targeting the security forces rather than civilians. This week was no different with 25 of 45 casualties coming from the army, police and Hashd.

Besides the rocket attack an army brigade commander was ambushed and killed in Tarmiya in the northern section of Baghdad province. The security forces had just gone through the area at the start of the month. Also a member of the Hashd was killed by an IED in Abu Ghraib. Tarmiya has been a long time IS base. It was formerly one of the main sources for car bombs into the capital. IS still has cells there although attacks are rare. Despite overall attacks being down in the country, the assassination of the brigade commander showed that the insurgents can still hit high level targets.

Diyala remains the most violent area of the country. There were 9 incidents during the week. A checkpoint was attacked along with a village, a Hashd base was hit by mortars and 7 Hashd were killed and wounded in a booby trapped house. Two of the incidents took place in the Khanaqin district in the northeast with five in the Muqdadiya district in the center and the rest in the north. The government conducted two sweeps as well, one in Muqdadiya and one in Lake Hamrin. It seems like after a lull in operations last month IS is back to work in the province.

There were three incidents in Kirkuk. 3 bodies were found shot while two IEDs exploded. Attacks have been at a low level in the governorate since the start of July.

A checkpoint was hit by mortar fire south of Mosul. The security forces also went through the Jazeera desert region along the Salahaddin border. This is one of the main base areas for the Islamic State.

Finally, there were three incidents in Salahaddin. There was one gun battle and two IEDs. Tharthar and the Jazeera desert by Ninewa were also searched by the government.

Al Maalomah, "ISIS bombed a headquarters of the popular crowd in Diyala," 7/19/20
- "Killing and wounding six fighters from the Popular Mobilization when a bomb exploded in Salahaddin," 7/19/20
- "The Popular Mobilization announces the death of one of its fighters in Abu Ghraib," 7/18/20
- "Two soldiers died from their injuries as a result of the Tarmiya attack yesterday," 7/18/20

Shafaaq News, "Revealing details of the killing of an army brigade commander and wounding 4 soldiers," 7/17/20

Al Sumaria, "Killing and wounding five people, including two children, with an explosive device targeting their vehicle near Shirqat," 7/17/20