Review The Death of the Mehdi Army, The Rise, Fall, and Revival of Iraq’s Most Powerful Militia

Krohley, Nicholas, The Death of the Mehdi Army, The Rise, Fall, and Revival of Iraq’s Most Powerful Militia, London: Hurst & Company, 2015 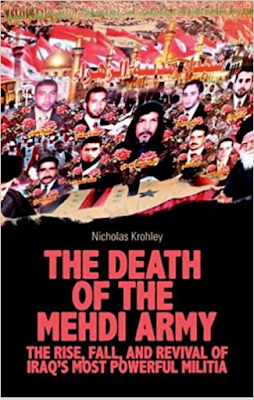 Nicholas Krohley was a member of a U.S. Army Human Terrain Team working in east Baghdad during the Surge. This was part of the military’s attempt to understand the socio-cultural dynamics of the areas it was operating in Iraq. He was in the capital when the U.S. and Iraqi forces challenged Moqtada al-Sadr and his Mahdi Army in its home turf of Sadr City and the surrounding area. The Death of the Mehdi Army attempts to tie in the history of east Baghdad and the rise of the Sadr movement to explain how its militia collapsed in 2008.


Krohley begins with the migration of poor Iraqis from the south to the capital and the hap hazard government planning that created east Baghdad. The settling of tribes by the Ottoman Empire that turned the tribes people into serfs that were exploited by their sheikhs started the process of movement to the capital. Most of them moved into east Baghdad which was open land at the time. Later agricultural reforms carried out by General Qasim and the Baath drove more people out of the south, while the authorities never provided enough housing or services for all the new arrivals to Baghdad. Those trends would continue right up to the 2003 invasion. The book explains how Baghdad became a metropolis in a short period of time in part thanks to this massive movement of people. While there were middle and working class families, Sunnis, Christians and Baath Party housing complexes the vast majority in the eastern section were poor Shiites from the south that were continuously replenished by new arrivals. These people were looked down upon as rabble and neglected by both the government, the Shiite clergy, and the middle and working classes. Despite their squalid conditions Krohley notes that many of these migrants still felt they were better off in the city than living in the rural south.

The book next deals with the rise of the Sadr Trend that directly appealed to the poor, but then fumbled its success. Ayatollah Mohammed Sadiq al-Sadr was originally supported by Saddam Hussein because he criticized the Najaf establishment and Iran, and championed tribalism. Sadr later began criticizing the government which led to his assassination. His son Moqtada built upon his father’s legacy and created the only mass movement in post-Saddam Iraq. By 2006 he had leading positions in the government and his militia the Mahdi Army was sweeping across the capital during the sectarian war. Krohley argues that Sadr struggled with success however. The violence perpetrated by the Mahdi Army alienated many, there was no strategy on how to run the conquered areas, many elements of the militia preyed upon the people it was supposed to protect, and when the civil war was largely over Prime Minister Nouri al-Maliki no longer needed him. The book believes these were the underlying factors that led to the Mahdi Army’s collapse in 2008. It’s image of victory on the battlefield of Baghdad belied its underlying weaknesses. It had not really organized the sections of east Baghdad it seized. There were many people who retreated into their homes because they were afraid of all the violence going on. There were still vestiges of the middle class that looked down upon the poor and the Sadrists. Likewise there were residents who turned against the Trend because elements extorted them for money, threatened them, etc. The Sadr movement also lacked the capacity to set up effective government and resources in the east. It was for these reasons that the U.S. and Iraqi forces were able to break up the Mahdi Army in rapid fashion in 2008 instead of having to take part in an extended battle as many expected.

The Death of the Mehdi Army is part history and sociological study of east Baghdad and the Sadrists and part military study of the campaign against the Mahdi Army in 2007-08. Thankfully it has plenty of maps to distinguish one area from another in the capital. That’s important because each section is broken down into smaller units and without the maps there’d be no telling one from another. It does a great job connecting all the dots between how east Baghdad grew, to the neglect it suffered, to how Ayatollah Sadr and his son built upon those conditions, and then how the Mahdi Army failed to exploit its military successes. There were some core areas of east Baghdad that were bastions of the movement, but many others were only marginally supportive. When the Iraqis and Americans moved into the east it found that the Sadrists did not have a popular base as expected. At the same time, after the military campaign was over the east remained poor and destitute as the authorities didn’t have the resources to provide services or governance. Krohley finished by writing that the Surge had a hollow victory in this part of the capital as the Iraqi government and Americans did little better than Sadr in running the east, and Moqtada survived and found continued roles in the government and politics.