Review Socialist Iraq, A Study in Iraqi Politics Since 1968 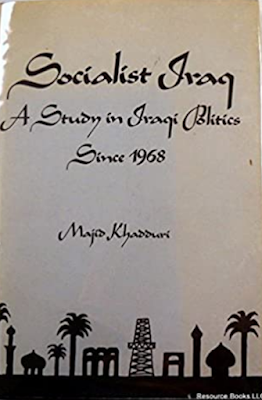 Majid Khadduri was a professor at Johns Hopkins University. He wrote four books about Iraq. This was the third after Independent Iraq: A Study in Iraqi Politics, 1932-1958 and Republican Iraq: A Study in Iraqi Politics Since the Revolution of 1958. All of his books were known for their detailed histories since independence and his access to Iraq’s top officials. Socialist Iraq, A Study in Iraqi Politics Since 1968 for instance was based upon three trips to Iraq in 1974, 1976 and 1977 that included interviews with President Ahmed Hassan al-Bakr, his lieutenant Saddam Hussein, various ministers and one of the founders of the Baath Party Michel Aflaq. This book and his last one on Iraq, The Gulf War, The Origins and Implications of the Iraq-Iran Conflict, showed a decline in his writing as he became a fan of the Baath. Socialist Iraq for instance took everything Bakr’s government told him at face value, and laid praise upon the president and Saddam Hussein.


The good part of Socialist Iraq is the background to the Baath. Majid believed the party was shaped by several factors. One was the failure of moderate reformist parties. That led to more radical ones like the Communists and the Baath. Second, The Ahali Party introduced socialism to Iraq, and third the Pan-Arab parties ended up adopting that same ideology. Out of that milieu the Baath began amongst students from Syria and Iraqis that went to Syria. The author then tracks the rise of the Baath from being minor partners in the 1958 coup to co-plotters in the 1963 coup, and finally the ruling party after the 1968 coup. All these changes in regime were led by the military. It was the armed forces that expelled them from the regime in 1963, so when they returned to power in 1968 they made sure to control the military by purging it and putting Baath members into command positions. Majid also covers all the internal struggles President Bakr faced and how the dissenters were handled. The book gives a detailed history of these events. It showed that the Baath came out of a period full of plots and violent take overs and that shaped the party’s world view. When it finally took power it was threatened by those same problems. It also goes over how the emergence of Arab nationalism and socialism in Iraq led to the Baath.

The next two-thirds of the book is where things go completely off the tracks. Majid accepts everything the Baath told him without criticism. He praised the discipline of the party. He wrote it was committed to efficiency, integrity and democracy. The problem was the book was written nine years into President Bakr’s rule and there were no elections. Majid said that was because the party had to shape the public before it was ready to take part in government. The fact that the party was trying to penetrate every sector of society from the military to the bureaucracy to unions to professional groups etc. by placing cells and the equivalent of party commissars within each was seen as an accomplishment. He repeated officials who told him that the Baath was not about a single leader but placed the party above all else. He applauded Iraq’s move towards socialism saying that it was trying to achieve progress and prosperity for its citizens. In 1977 there were protests against the regime in Najaf and Karbala during a Shiite pilgrimage which were put down by force. He repeated Bakr’s story that this was a Syrian plot when it was actually a spontaneous demonstration by religious Shiites against the regime. He goes on to say that the government didn’t enrage the Shiites by the crackdown, but then adds that eight people were executed as a result of the unrest. To top it all off he wrote a short biography of Saddam Hussein who he called patient, prudent, courageous and ambitious. To the author Iraqis accepted the Baath rule because it was trying to redistribute wealth through its social programs. In the end, Majid hoped that President Bakr was leading the country towards a form of social democracy. This is all pure propaganda from Baghdad. Majid never took the previous governments at face value giving critiques and analysis in his previous two books. Here he completely changed course and became a cheerleader. That was continued in his fourth book on the Iran-Iraq War that only gave Baghdad’s version of the conflict. Socialist Iraq was where that started. How else can you explain a party that was making sure it controlled every facet of society, stamped out opposition, and had the same man in power for nine years when the book was written be called democratic, progressive and with the people’s best interest at heart?

Socialist Iraq was a huge disappointment. It undermined Majid’s earlier work on Iraq. This book read like an official release from President Bakr’s government. The praise he poured on the Baath makes you shake your head. He talked about how socialism was the panacea for the masses. He couldn’t say enough about what great leadership the Baath provided. He repeatedly said the party was committed to democracy. That alone tells you where Majid was coming from. He truly seemed to believe that the Baath were best for Iraq and wrote this book and his next one about how good they were for the country.