Review ISIS The State of Terror 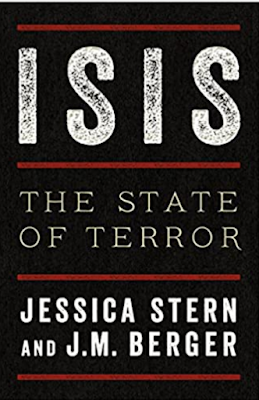 The rise of the Islamic State to international prominence in 2014 with its seizure of Mosul, Iraq and the declaration of its caliphate led to a cottage industry of western books on the group. ISIS The State of Terror by Jessica Stern and J.M. Berger was one example coming out in 2015. It tried to compare the Islamic State to the larger jihadist movement, highlighting the differences between IS and Al Qaeda. It also talked about its unique use of violence and the Internet. Overall, the book is a bit uneven. The first half on the history of the Islamic State and its differences with Al Qaeda is good. The second part not so much as it tends to lose focus.


ISIS The State of Terror has a very good start pointing out the differences between the Islamic State and Al Qaeda. It compares the beheading of James Foley in 2014 with the decapitation of Nicholas Berg in 2004. That highlights IS always promoted gruesome acts of violence across the world to intimidate its foes and recruit new followers. Al Qaeda always condemned these acts warning that it could cost the jihadist movement support amongst other Muslims. Al Qaeda saw itself as an intellectual vanguard group that would assist others. IS on the other hand called on all Muslims to come to its caliphate. Al Qaeda was small and elite. The Islamic State was populist. The Islamic State was able to push its message through a slick media operation involving magazines, newspapers, Facebook and Twitter in multiple languages meant to appeal to foreign audiences. Al Qaeda in comparison had long videos of its leaders like Ayman al-Zawahiri giving speeches with none of the excitement nor popular appeal that the Islamic State’s media had. It focused on other jihadists already converted to the cause. Stern and Berger wrote that IS was a game changer. It’s use of violence, media and its utopian vision of the caliphate set it apart from not only Al Qaeda but all the other jihadist groups around the world. It set a new standard of what an extremist group could do and achieve.

Where the book starts going off track is its discussion of social media and ideology. First it has a whole chapter on the use of the Internet that has nothing to do with IS. Then it goes over some of the major Al Qaeda and Islamic State supporters on Twitter, what they said, and how the company eventually responded. When it first discusses the Islamic State’s ideas it doesn’t deal with what it said but rather tries to use sociology and other Social Sciences to try to explain how it appealed to people. Then when it does go into its ideology it focuses upon its apocalyptic ideas. The book does note at the end that it didn’t know whether IS actually believed in the End Times or was just using it to gain followers. This whole second part of the book showed how ISIS The State of Terror was a reflection of the 2014-15 period. Jihadist Twitter accounts for instance and the back and forth between them were trendy at that time, but in the big picture of things weren’t that important as how IS used the Internet which was already covered earlier in the book. The talk about IS being an apocalyptic group also proved to be way off. One of the group’s slogans was that it would endure, not that it wanted everything to end.

ISIS The State of Terror was definitely a book of the moment when it was published in 2015. To many Western researches the group was brand new to them, and so its use of things like Facebook and Twitter were very novel. Unfortunately that took the book off on tangents. Other times Stern and Berger were quite good like their comparison of Al Qaeda and the Islamic State. Today there are much better books focused solely upon the Islamic State, its strategy, tactics and ideology because people’s knowledge has grown so much. When ISIS The State of Terror came out it wasn’t bad. It’s just that it’s been surpassed by others in the field since then.