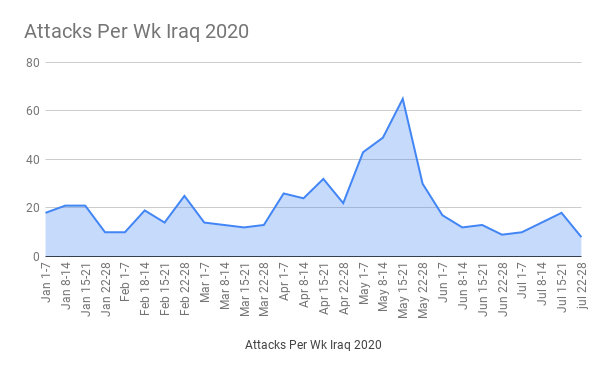 Security in Iraq remained at a very low level after the Islamic State’s annual Spring offensive. There were 13 incidents total reported in the media. Five of those were by pro-Iran groups targeting the U.S. That left just 8 incidents by the Islamic State. This was the second time this year that attacks by the militants were in single digits. This has now become routine in the country. There is a huge surge of violence once or twice a year and then a large drop afterwards.

There were five incidents by pro-Iran groups during the week. Three of those were in Baghdad where a drone and a bomb were discovered, while rockets were fired at the Besmaya and Taji bases. In Dhi Qar, a convoy carrying supplies for the Americans was hit by two IEDs. Finally, in Salahaddin, Camp Speicher was also targeted with rockets. In total, there have been 9 incidents by these groups during July. This new wave attacks began in June when the U.S. and Iraq opened talks over a new security agreement which Iran is against.

Overall, there was 1 incident in Babil, Dhi Qar, Diyala each, 2 in Salahaddin, 3 in Baghdad, and 5 in Anbar.

That led to 9 deaths and 8 wounded. 4 Iraqi Security Forces (ISF) and 5 civilians were killed and 1 civilian and 7 ISF were injured. Salahaddin had 6 of those casualties while the remaining 11 were in Anbar. 11 of the 17 were from the security forces, which has been the trend since spring.

In an unusual development Anbar had the most incidents with 5. A checkpoint was attacked in the Hit district and a motorcycle bomb went off against two soldiers in Kubaisa both in the center. An army patrol was shot at in Nukhaib in the south towards Saudi Arabia, and an infiltration attempt was spoiled in Akashat in the west by Jordan. The biggest incident was an attack upon a checkpoint also in the Hit district that led to an ambush of the reinforcements that arrived. An army brigade commander was killed in the process. This was the second brigade commander killed this month by IS. This was another sign of the new campaign by the insurgents to go after the security forces.

The water director in Hilla, Babil had his house shot at. This was the third such incident in the city with two other officials being targeted. Usually IS only focuses upon the Jurf al-Sakr district which is a large Kataib Hezbollah base. The group now appears to be branching out.

There was only one incident in Diyala when a village was assaulted in the Jalawla sub-district in the northeast. This was a rare week since the province is the center of the insurgency in the country. It regularly is the most violent, so being so quiet during the week was definitely a change. The government did a sweep as well along the Diyala-Salahaddin border.

IS killed a mukhtar, a village chief, and his sons in the Samarra district of Salahaddin. The government did two sweeps through that district as well. Mukhtars were a regular target from 2018-19 but those types of incidents have become rarities this year.

Iraq Newspaper, "Mukhtar, Samom Village, in Abbasiya, Samarra and 4 of his sons were killed in ISIS terrorist attack," 7/24/20

- "The PMF is carrying out a security operation east of Samarra in search of ISIS terrorist operatives," 7/22/20

NINA, "Armed Men Attack The House Of The Director Of Water Resources in Babylon," 7/22/20

- "A brigade Commander and a first lieutenant officer were killed in an ISIS attack in Heet," 7/29/20

- "Clashes Between ISIS And The Residents Of A Liberated Village In Diyala," 7/27/20

- "Four members of border guards killed and wounded in an attack by ISIS in the desert of Anbar," 7/28/20

- "Killing and wounding two soldiers with a motorcycle bomb explosion in Anbar," 7/25/20

- "The PMF foils an ISIS attempt to infiltrate through Syrian territory," 7/28/20