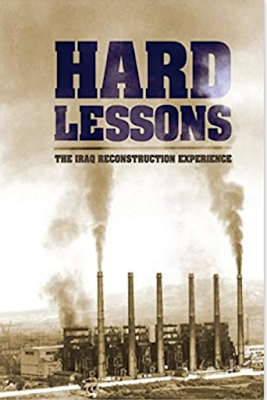 Stuart Bowen was the Special Inspector General for Iraq Reconstruction from 2004-13. His job was to assess the American rebuilding effort in Iraq. In a series of reports he documented the huge failure the United States suffered in Iraq. Much of that history was put together in Hard Lessons, The Iraq Reconstruction Experience that covers the period from 2001 to 2008. At the heart of the matter was the U.S. attempting the largest rebuilding effort in its history in the middle of a war with no unified plan which was a recipe for disaster.


Hard Lessons begins with the roots of America’s problems in Iraq which was never having a coordinated strategy. This started before the invasion and was never resolved. In September 2001 Defense Secretary Donald Rumsfeld ordered a review of war plans for Iraq. The vast majority of time was spent on the invasion, but eventually 14 different groups were working on the postwar situation. They were prevented from working together because President Bush was worried that their work might leak out and undermine his effort to garner support for war. Then in 2003 the president put the Pentagon in charge of Iraq after the invasion and all that work was wiped away and four new groups were given responsibility for Iraq after the war. When reconstruction actually started there were always various organizations working mostly separate from each other. This lack of a unified effort meant that the military was often working without coordination with rebuilding. There were also so many different priorities from infrastructure to governance to agriculture, etc. with none of them getting proper funding. The lack of security also meant many of the plans went awry as people were killed, costs soared, money was diverted to hiring guards and building safe facilities that diverted away from the actual projects. Stuart provides example after example of how America created a bureaucratic mess of its own making in Iraq and never unentangled itself.

Stuart collected a mind numbing list of other mistakes that the U.S. made in Iraq. For instance, the White House assumed a best case scenario for the day after the invasion and ran into the worst situation. The Americans constantly changed strategy starting with a quick handover to an Iraqi authority right after the invasion under the Office of Reconstruction and Humanitarian Affairs (ORHA) to a long term American occupation with the Coalition Provisional Authority (CPA). The U.S. could never get enough personnel in Iraq and there was constant turnover. That effected things like being able to write effective contracts for rebuilding projects. Many companies were given contracts that didn’t limit their costs which led to huge amounts of waste. An effective management system to monitor and keep track of projects was never created throughout the entire occupation. The Americans attempted to create a new government system in Iraq with local, district, provincial councils and a parliament, but never empowered, funded or coordinated the lower levels. Plus the Iraqi parties wanted to seize ministries to control the state’s resources and didn’t want to share with others. The U.S. never seriously included Iraqis in its plans and built things it wanted rather than what the population needed. It also failed to build capacity within the Iraqi government to handle many of the projects it built. There are more that Stuart writes about. It all reads like a comedy of errors. Worse it was a never ending series of self-inflicted wounds which the U.S. could not pull itself out of. Again, because the U.S. never had an effective and singular plan for the rebuilding of Iraq it led to this cascade of problems. Worse yet, as you get deeper into Hard Lessons it explains how the Americans realized many of the bureaucratic issues, but when they tried to fix them many times they made them worse. After reading the book one comes away with the idea that the U.S. effort in Iraq was doomed to failure.

The United States set out to transform post-Saddam Iraq and failed. Stuart blames the White House and Pentagon that didn’t take the postwar situation seriously. From there problems cascaded down during the entire occupation. This wasn’t a case of a bridge too far, but a road that should have never been taken. On top of all that Hard Lessons was supposed to provide lessons learned to Washington D.C. in the hopes that a situation like Iraq wouldn’t be repeated. The American government and military however is trying to forget the conflict just like it did with Vietnam. That means everything Bowen wrote to try to reform things mostly fell on deaf ears which bodes ill for the next time the U.S. gets into a war.