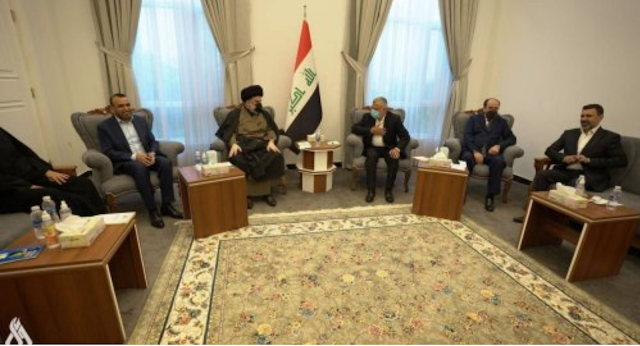 (Iraqi News Agency)
Iraq’s political leaders have only just begun talks over forming a new government even though elections were held three months ago. Fragmentation has made the process all the more difficult.

The main dispute is between Moqtada al-Sadr and the Coordination Framework that includes the other major Shiite parties. The Framework continues to talk as if it won the election and Sadr should join it, even though he’s much likelier to create the new administration. Sadr on the other hand is attempting to break apart the alliance by excluding his longtime foe former prime minister Nouri al-Maliki. That will be very difficult as he has the most seats within the Framework. These parties all used to cooperate with each other to ensure Shiite rule, but now that they have it they are split over who gets the spoils along with personal feuds.

Iran is trying to mediate as usual. It is pushing its allies within the Framework to make peace with Sadr so that the Shiite lists are united once again. Al Mada even reported that it is willing to sacrifice Maliki if that means a new government is formed. This has been the role of Iran since 2003 to try to get the Shiite leaders to cooperate since many of them are allies of Tehran and ensure its influence in the country.

The other lists are no better off. The Kurdistan Democratic Party (KDP) and Patriotic Union of Kurdistan (PUK) are split over who gets the presidency. The PUK has held the position since 2005 but the party has seriously declined since its leader Jalal Talabani passed away. The KDP is now the dominant party in Kurdistan and would like to hold all the top Kurdish positions.

Speaker Mohammed al-Halbusi and financier Khamis al-Khanjar are still arguing over who will be speaker of parliament. It appears Khanjar is looking for the best deal between Halbusi and Sadr on the one hand and the Coordination Framework on the other. Khanjar has tried and failed to remove Halbusi before and replacing him as speaker was one of Khanjar’s main goals after the election. Now he’s just seeking as much power as he can get from whoever is willing to offer it to him in return for his list’s seats in parliament.

Al Aalem, “After the El-Hanana meeting, why did the Coordination Framework refuse to sacrifice al-Maliki,” 12/30/21

Al Mada, “The Coordination Framework meets with Sadr over government, even if it costs the isolation of al-Maliki,” 1/3/22

- “The majority government coalition negotiations are entering their final stages,” 1/3/22