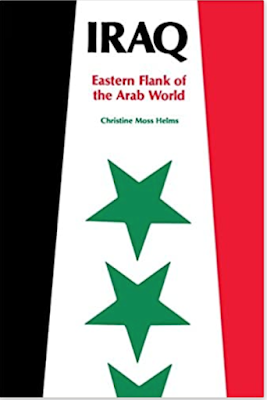 Iraq, Eastern Flank of the Arab World was published by the Brookings Institution in 1984 to educate American think tankers, politicians and policy makers about Iraq when it was becoming more important during the Iran-Iraq War. The author Christine Moss Helms went on two government sponsored tours of the country in the 1980s. She took many of its claims at face value leading to some laughable sections of the book. Most important of which was that Saddam Hussein was not the sole leader of the country. This made the book useless.

Helms begins by trying to explain Iraq’s world view and how that shaped its foreign policy. It deals with Iraq’s history of being repeatedly invaded and how it was split between larger powers such as the Ottomans and Persians. When Iraq was created its boundaries were also disputed on all sides leading to conflicts. Third Helms argued it was tied to its neighbors by trade and people. Helms laid out four strategic interests for the Baathist government as insuring its water supplies from Turkey and Syria which were the origins of the Tigris and Euphrates Rivers, dealing with being a largely landlocked country, protecting its oil industry and Arab nationalism. Water and being landlocked came into play when Iraq decided to invade Iran in 1980 as Baghdad wanted undisputed control of the Shatt al-Arab its only access to the Persian Gulf. This also ties into the disputed boundaries themes. Others didn’t seem as relevant such as the maintenance of historic ties to the region. The larger problem was Helms didn’t deal with the center of both Iraq’s world view and decision making which was Saddam Hussein.

This brings up the hilarious parts of the book. Helms wrote that the Baath party not Saddam ran the country. She believed Baathist she interviewed who claimed the country relied upon consensus leadership emanating from the Revolutionary Command Council rather than being an autocracy. She said that Saddam was only in power at the behest of the party. Other things she repeated from her government tours were that the regime used scientific planning to determine its planning making it a modern nation state. That the government emphasized social spending because its goal was to serve the people. That the Baath were not controlled by Sunnis from Tikrit like Saddam. That Saddam only put relatives into the security agencies which meant they were not that important, and that the Baathist leadership were frugal family men who went to work and spent little time on social life! You have to wonder how any author could hear this stuff from a dictatorship like Iraq, actually believe it, and then repeat it in writing. Downplaying the role of Saddam was so egregious it undermines the entire book.

Whatever good points there may be in Iraq, Eastern Flank of the Arab World are made irrelevant by how badly Helms wrote about Saddam’s government and the Baath Party. was she just entirely naïve or worse did she write the book as a piece of propaganda to either push or justify the Reagan administration moving towards Iraq during the Iran-Iraq War which was already happening? There’s no other explanation for writing such rubbish.