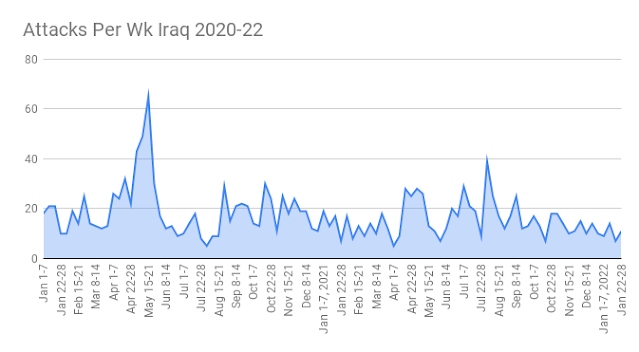 Violence remains at a historic low during the winter of 2021-22. The Islamic State has gone into its winter break and is carrying out the fewest attacks since 2003. After a burst of activity during the start of January, incidents by pro-Iran groups has also fallen off.

There were a total of 16 security incidents reported in the media from January 22-28. That compared to 12 the week before, 31 the second week and 18 the first week of the month. Attacks by factions aligned with Iran have decreased recently. There were 17 attacks by them the second week of January. Afterward there were 5 the third week and just 4 this week. That included an IED on a supply convoy working for the U.S. in Babil and rockets fired at Baghdad International Airport. Missiles were also launched at Speaker Mohammed Halbusi’s residence in Anbar and a Molotov cocktail was thrown at a Sadr office in east Baghdad in two acts of political violence. It appears these groups wanted to announce that they were still a threat to America after the October elections as well as delivering a message to their political rivals that they needed to be included in the next government. Things have turned against them in negotiations however as they realized that Moqtada al-Sadr held the upper hand. That has led to a reduction in their activities in the second half of the month.

There were 12 incidents by the Islamic State during the week. IS attacks have been in the tens and teens for 18 weeks. The insurgency regularly lays low during the winter but this is the fewest attacks since 2003.

There were 8 deaths and 19 wounded during the week due to this activity. 4 civilians and 4 members of the Iraqi Security Forces (ISF) were killed while 3 civilians and 16 ISF were injured. There were 12 casualties in Kirkuk and 10 in Diyala followed by 3 in Babil and 2 in Anbar.

IS attacked remained aimed at intimidation. In Diyala there were two shootings and two IEDs. These were all in the northeastern part of the province which has seen increasing attacks recently. The area is used for moving men and material between Diyala and Salahaddin. There are large security gaps there with no government presence. In Kirkuk there were two shootings, two IEDs, and two kidnappings. Similarly in Salahaddin a checkpoint was shot at. All of these were aimed at keeping civilians and the security forces out of IS dominated regions of the country. The group has been almost completely on the defensive since the middle of September of last year and marks another decline for the group who’s future is up in the air.

Finally, in north Babil an old IED went off that killed two and wounded another.

- "Unidentified Gunmen Attack The House Of An Officer In Counter-Terrorism Service Of The PUK," 1/28/22

Shafaq News, "Federal Police wounded in an explosion in Kirkuk," 1/25/22

- "The number of casualties from the Iraqi army increased in the Hamrin Basin operation in Diyala," 1/27/22

- "An officer was injured in clashes with ISIS between two Iraqi provinces," 1/27/22

Sotaliraq, "Two civilians were killed in an armed attack in Diyala," 1/24/22

Al Sumaria, "Urgent - 3 people were killed and injured as a result of a war remnant explosion in Babylon," 1/28/22

- "Urgent - An attack on Al-Sadr's Baladiyat headquarters, east of Baghdad … with Molotov cocktails," 1/26/22