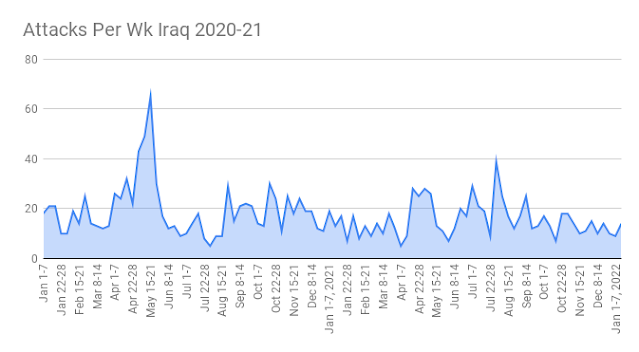 There was more activity by pro-Iran groups during the second week of January than by the Islamic State. The latter is in its annual winter break while the former has started a new campaign against U.S. targets in Iraq.

There were a total of 35 incidents recorded in Iraq from January 8-14. That was up from 18 the week before. The reason for the increase was attacks by pro-Iran groups.

These led to 3 dead and 18 wounded. 1 civilian, 1 Hashd al-Shaabi, and 1 member of the Iraqi Security Forces (ISF) were killed while 3 Hashd, 6 ISF and 9 civilians were injured. Baghdad had the most casualties with 12. 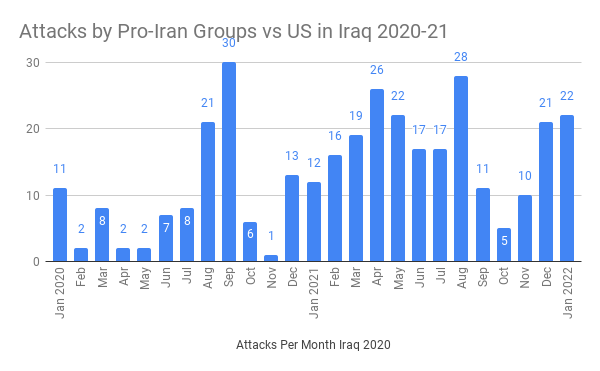 Factions linked to Tehran carried out 21 incidents during the week. That included bombings of convoys working for the Americans in Babil (2), Baghdad (4), Muthanna (2), and Salahaddin (1). IEDs were also dismantled in Babil, Baghdad, Dhi Qar twice, Diwaniya, and Muthanna. Rockets were fired at the Green Zone which wounded three Iraqi civilians. Finally, there was political violence surrounding the October elections and government formation process. That included the Kurdistan Democratic Party (KDP), Taqadum and Azm offices being attacked and a KDP official escaping an assassination attempt. These factions began this new campaign against the Americans in November after the October elections. They are also attempting to pressure Sadr’s allies over the new government. There have been 30 total incidents by them in January versus 23 in December.

There were 14 incidents by the Islamic State. Attacks by the group have been in the tens and teens since the middle of September. The militants routinely decrease their operations nearly every winter.

Almost all of these attacks were aimed at keeping civilians and the security forces out of IS areas. For instance, there was an IED that killed 1 Hashd and wounded 2 more in Akashat in western Anbar which is a major smuggling area for the group. In Tarmiya, northern Baghdad there was a shootout with the army that left 5 soldiers dead. This is the Islamic State’s major base in the province. Likewise, there were two assaults on checkpoints and a shooting in the group’s strongholds in central and northeastern Diyala. This is the main focus of the militants right now, protect their bases and preserve their leadership and cadres.

There were a few targeted attacks like an IED on a soldier’s house in Baghdad and a kidnapping in southern Kirkuk. These were likely done for money and intimidation.

Finally, a bomb went off at a checkpoint in Babil’s Jurf al-Sakhr. This is a favorite target of IS because it is a large Kataib Hezbollah base surrounded by army units.

- "A Convoy Of Logistical Support For The Int'l Coalition Forces Targeted With An IED In Babylon," 1/10/22

- "Failed assassination attempt on one of the most prominent tribal sheikhs in western Iraq," 1/12/22

- "A former member of the tribal mobilization was killed in an armed attack in Diyala," 1/13/22

- "A new attack targets the logistical support of the coalition in Iraq," 1/13/22

- "Targeting a logistical support convoy of the international coalition in Samawah," 1/11/22

- "Thwarting a detonation by an explosive device that was intended to target the coalition convoys in southern Iraq," 1/9/22

- "Thwarting an attempt to target a convoy of the International Coalition in southern Iraq," 1/13/22

Sotaliraq, "Explosion of a bomb on the road between Altun Bridge and Kirkuk," 1/14/22

- "An explosion targets a convoy carrying equipment for the International Coalition, north of Baghdad," 1/13/22

- "A soldier dies of wounds after an ISIS attack between Diyala and Salahaddin," 1/9/22

Al Sumaria, "5 soldiers were injured in clashes with ISIS in Tarmiya," 1/8/22

- "Baghdad .. A bomb exploded as a vehicles carrying equipment for the Iraqi army passed by," 1/9/22

- "Dismantled an explosive device that was intended to target security convoys in Babylon," 1/22/22

- "A woman and two children were injured in an explosion targeting a logistical support convoy in Baghdad," 1/9/22