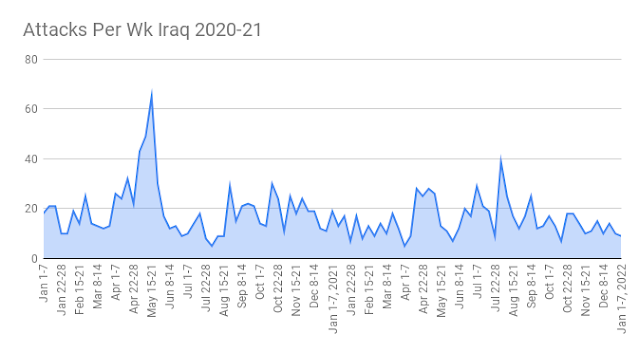 The new year saw just as many incidents by pro-Iran groups as the Islamic State. While the latter is still in its winter break the former has started a new campaign against the U.S. and Turkish presence in Iraq.

There was a total of 18 incidents recorded in Iraq from January 1-7. Overall incidents have been at that level since the middle of September 2021. 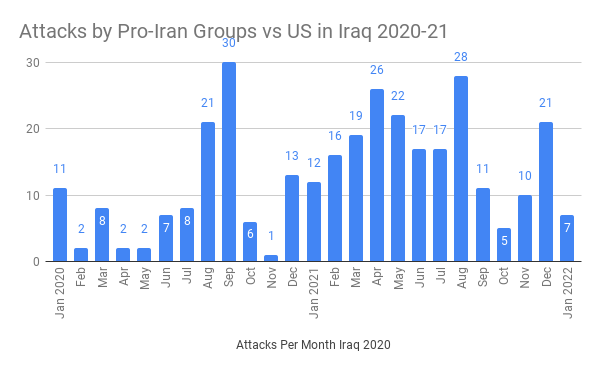 There were 9 incidents by pro-Iran groups. Convoys working for the U.S. were bombed in Baghdad, Babil twice and Muthanna, while rockets were fired at Camp Victory in Baghdad and Ain Al-Asad base in Anbar. The Americans also shot down drones over Baghdad International Airport and Ain al-Asad. Finally a Turkish army base in northern Ninewa was struck with missiles as well. At the end of 2021 the Americans announced that all its combat troops had withdrawn from the country. It still has forces aiding the Iraqi military which these Resistance factions want out. They also consider Ankara’s presence in the north a second occupation and have been attacking them as well lately.

There were 9 incidents by the Islamic State in Baghdad (1), Diyala (4), Kirkuk (2), Ninewa (1) and Salahaddin (1). IS has wound down its attacks since the summer as it has done almost every winter.

Those left thee dead made up of one civilians, one Hashd al-Shaabi and one member of the Iraqi Security Forces (ISF). Another four were wounded consisting of one peshmerga and three ISF. Those casualties were spread across Baghdad, Diyala, Kirkuk, and Ninewa. This was one of the smallest weekly totals, and another sign that the insurgency is in hibernation currently.

All the attacks during the week were small in scale. In Madain in the outer south of Baghdad province an IED went off that left two army casualties. A checkpoint was shot at in the Tal Afar district of western Ninewa killing one Hashd, another in Kirkuk that left a Peshmerga injured, and a third in northern Diyala. Rockets were fired at a Peshmerga position in the Dibs district of Kirkuk, and infiltration attempts were foiled in eastern Salahaddin and northern Diyala. An bomb wounded two police and there was a shooting in the latter province as well. These incidents represent IS’s activities in Iraq for the last two years. They are mostly aimed at keeping civilians and the security forces out of Islamic State controlled areas such as southern Kirkuk and central and northeastern Diyala. One change is that the insurgents have also been hitting northwest Diyala recently along the Salahaddin border. It appears it wants to establish de facto control over the area which it has mostly used for logistics lately.

NINA, "Thwarting an infiltration attempt by ISIS in Mutaibija, in Salah al-Din Governorate," 1/6/22

- "Peshmerga Member Wounded In Sniper Attack On Barricades In Kirkuk," 1/7/22

Shafaq News, "In less than an hour, a second attack targets the coalition in Babylon," 1/5/22

- "A new attack targeting the international coalition in southern Iraq," 1/5/22

- "Ninewa .. A terrorist attack targets a popular crowd checkpoint and causes a victim," 1/4/22

- "The third attack within hours .. A bomb exploded on a convoy of logistical support for the coalition in Babylon," 1/6/22

Sotaliraq, "In Diyala … Unidentified gunmen shoot and kill a citizen," 1/7/22

- "Iraq: One soldier was killed and another wounded in an explosion near Baghdad," 1/5/22

- "The Popular Mobilization Forces thwart an ISIS attack on a security point north of Baqubah," 1/2/22

Al Sumaria, "Two members of the Federal Police were injured by an explosive device between Diyala and Nahrawan - Urgent," 1/5/22