The Islamic State carried out one large attack upon the army during the third week of January to let people know what it’s still capable of. Otherwise, the group is still taking its winter hiatus. Pro-Iran groups also took a step back from attacks during the week. 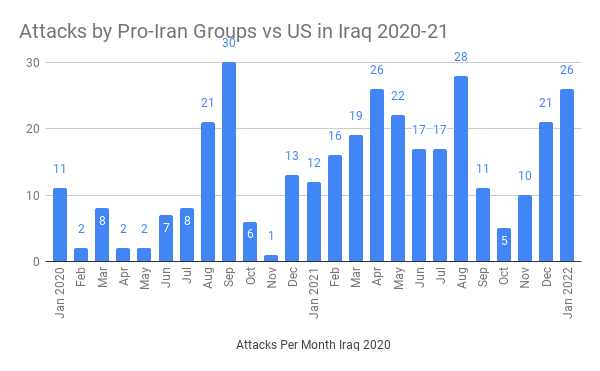 5 of those were by pro-Iran factions. That included an IED on a convoy working for the U.S. in Basra and two separate rocket attacks upon a Turkish base in Ninewa. Drones were also shot down over the Balad Air base in Salahaddin. Finally, the second deputy speaker of parliament’s office in Kirkuk was bombed as part of the political violence following the October election. This was a decrease from the previous week when there were 21 incidents by these groups. Still there have been 26 successful attacks in January which is the highest since 28 in August.

There were only 7 incidents by the Islamic State during the third week of the month. Those happened in Anbar (1), Babil (1), Baghdad (1), Diyala (3) and Salahaddin (1). IS activity has been in the tens and teens each week since the middle of September as the group has taken its annual break during the winter.

They left 17 dead and 12 wounded. 2 Hashd al-Shaabi and 11 members of the Iraqi Security Forces (ISF) were killed and 1 civilian and 11 ISF were injured. Diyala had the most casualties with 22.

The Islamic State carried out one major attack during the week. That was an assault upon an army regimental headquarters in the Edheim district in northern Diyala. It left 11 soldiers dead and 10 more wounded. IS has picked up its activity in this area the last few months. It is traditionally used for smuggling with neighboring Salahaddin and the rough territory has large security gaps with no government presence.

The remaining six incidents were all low-level harassing attacks as usual. An IED went off in Anbar’s Rutba district wounding 1 soldier. A mosque was bombed in northern Babil. 2 Hashd were killed in northern Baghdad’s Taji district. There was a kidnapping and two more shooting incidents in Diyala. And 5 civilians were abducted in Salahaddin’s Samarra district with four of them being executed. Most of these attacks were meant to keep people and the security forces out of IS areas. The kidnappings were likely for intimidation and to extort money from civilians.

NINA, "An Explosive Device Explodes Near A Mosque, North Of Babylon," 1/15/22

- "Two Sheikhs Of Al-Joraniya Tribes Survived An Assassination Attempt Between Diyala And Baghdad," 1/16/22

- "In the second attack of its kind, a missile attack targets the Zlikan base, and the Turkish forces respond," 1/15/22

Al Sumaria, "Targeting the office of the second deputy speaker of parliament in Kirkuk," 1/19/22