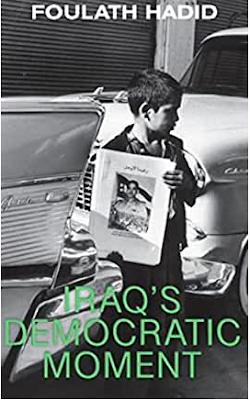 Iraq’s Democratic Moment by Foulath Hadid is a history of Al-Ahali and the National Democratic Party (NDP), two opposition movements during the monarchy period in Iraq which lasted from 1920-1958. Hadid argues that these two parties pushed for democracy in a system that had elections but was mainly authoritarian and under British influence. It’s an excellent account of the politics of the country during this era, but there are some major problems in how Hadid deals with the Assyrians, the military and the monarchy.

Hadid documents how the British created Iraq after World War I and gave it the trappings of a democracy but never let it develop. The country had a monarchy, elections to select a parliament, and a prime minister picked by the king. The United Kingdom was supposed to develop the country’s politics under a League of Nations mandate but never did. Instead, the king backed by London would turn to men like Nuri al-Said, one of the author’s favorite characters, who was premier fourteen times to run the country. Said would routinely arrest opposition figures, ban newspapers, outlaw political parties, and use the police and violence to put down protests. Elections were fixed with the major leaders like Said selecting who would win. Many parliamentarians were sheikhs who were the major landowners in a semi-feudal economy who simply rubber stamped whatever the prime minister wanted. That made Iraq far from a functioning democracy. The English were largely fine with the system as long as they maintained their power over the country.

Iraq’s Democratic Moment focuses upon Al-Ahali which became the National Democratic Party (NDP) that fought for civil liberties and democratic rights. They called for direct elections, an end to voter fraud, freedom of the press and speech, an end to Britain’s role in the country along with social services. Foulath compares both to the British Labor Party. When there were protests against the Anglo-Iraq Treaties which gave London control of Iraq’s government and military for decades it was Al-Ahali and the NDP who were at the forefront. The author points out that the major problems with both groups were the lack of internal cohesion and unity with the other opposition groups. Some NDP members for instance pushed for socialism or Marxism, some members along with other opposition parties would routinely join a government thinking it could push for change from within and to gain the benefits of running ministries. The book goes into great detail into every Iraqi government during this period and how the opposition reacted to them. Foulath valorizes the struggles of both parties but in the end they didn’t achieve much because the government was able to play divide and conquer with the opposition along with using repression. One of the major leaders al Al-Ahali and the NDP spent much of his time in jail thanks to Nuri al-Said. The author also failed to note that neither Al-Ahali nor the National Democratic Party ever built up a sizeable base of support being almost exclusively intellectuals and students.

There are several major problems with the book as well. For one, in 1933 the Iraqi army massacred Assyrians. The author said that the Assyrians started a revolt and the military simply put it down. Second, Foulath constantly puts down the monarchy as a foreign imposition that was never fully accepted by Iraqis. The first king Faisal was from present day Saudi Arabia and made monarch by the British. Then when discussing Faisal’s son King Ghazi who was a Pan-Arabist and Iraqi nationalist the book said that if he hadn’t died in a car crash the country might still have a king to this day like Jordan and could have escaped all the autocrats and dictatorships that came afterward. Condemning the kings and then saying one could have saved the country is too contradictory of an argument. Speaking of contradictions, Foulath also talks about how the military officers didn’t care about democracy and wanted an authoritarian government. In 1936 however Al-Ahali backed a military coup which promised political reforms and getting rid of the old guard politicians. Instead, the general who led the coup Bakr Sidqi ended up taking over the government and was eventually overthrown by other officers. Then the 1941 Anglo-Iraq War which was started by those same officers is praised as a great nationalist moment for Iraq as the military was trying to expel British influence. Foulath talks about these two moments as turning points in Iraqi history even though they were done by anti-democratic forces. His Iraqi nationalism led him to excuse these events.

Despite its shortcomings Iraq’s Democratic Moment is still worthwhile to read. It gives a blow by blow account of the monarchy, the prime ministers, and the opposition parties as they vied for power with the status quo reigning supreme. Things didn’t really change until the 1958 coup which ended the monarchy. That’s covered at the end of the book as another failed experiment. The reader can appreciate Foulath’s commitment to Al-Ahali and the NDP for its constant fight against the odds to make Iraq more democratic while also acknowledging how he supported undemocratic moments in Iraqi history.