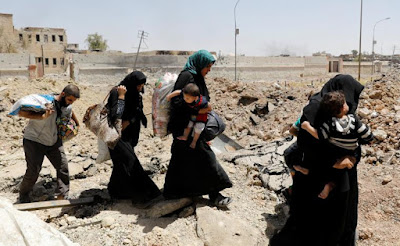 The Iraqi forces (ISF) made two advances in the final battle for Mosul. Zinjali was declared freed for the second time. The last few days the ISF have been contradicting themselves about whether the neighborhood was liberated or not. Bab al-Sinjar, one of the northern entrances to the Old City was also taken. That has shifted the heavy fighting to Shifa and the Old City district, both of which are along the Tigris River. The ISF are going to attack the latter from multiple directions with the army, police, and Golden Division. Shifa and the Old City are the only two sections of the city still under Islamic State control. The combat is incredibly intense due to the dense layout and the fact that the IS fighters have nowhere to go.


The Guardian reported that the Hashd were emptying all the villages in western Ninewa. There was more evidence of that. The United Nations reported that from June 5-11 14,000 people arrived from the Baaj area along the Iraq-Syrian border. No one was really being displaced from this area beforehand. The Hashd have told people they have to leave because the area is not safe with explosives and perhaps stay behind insurgents. The question is whether they will be allowed to return. The Hashd may want to turn western Ninewa into a security zone to stop foreign fighters from sneaking into Syria from their traditional routes through this area. They also want to protect the Shiite Turkmen that live there. Finally, the pro-Tehran Hashd want to create a land route from Iran through Iraq to Syria to assist the Assad government. Together that may mean much of west Ninewa will remain empty of civilians.

There was a tragedy at a displacement camp east of Mosul. A Qatari charity delivered meals to the Hassan Sham U2 camp to be eaten after the daily fast for Ramadan was over. The food was prepared at a restaurant in Irbil and then delivered to the camp. 800 people became ill from food poisoning from the dinner. Originally the Irbil health director claimed a child died as a result, but then said that was based upon the wrong information. There were further stories that 2 adults passed away. The restaurant owner was arrested as a result.

The number of displaced (IDPs) continued to climb. On June 10, there were 402,126 registered IDPs, the first time the figure had passed the 400,000 mark. By June 13 that had risen to 411,600. The number of people coming out of Mosul has remained steady for the last two weeks at around 2,000-3,000 per day. The recent increase was due to the forced displacement going on in west Ninewa by the Hashd.

Kuwait funded a dialysis center at a hospital in Irbil that serves IDPs from Ninewa. The clinic treats around 100 patients per day for free. Kuwait is one of the few regional countries that is helping the people of Ninewa. It has donated another $4 million to the International Organization for Migration, one of the major IDP relief agencies. The Kuwait Red Crescent is also operating inside Mosul delivering aid and food.

Chulov, Martin, “Booby-traps … but no Baghdadi: the men cleaning up after Isis in northern Iraq,” Guardian, 6/12/17

Khabaar, "Commander Of Ninewa We Are Coming Yarallah: the full liberation of Zanjili neighborhood and the storming of Al-Shifa neighborhood in Mosul," 6/13/17

Al Maydeen, “Iraq: correspondent in the field: very violent clashes between the Iraqi forces and Daash in Shifa,” 6/13/17