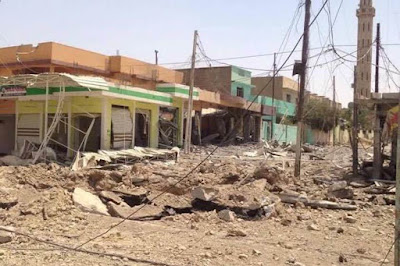 Picture of destruction in Rifai neighborhood west Mosul freed on May 17, 2017 (Baghdad Post)

The Iraqi forces (ISF) continued to have problems with their reporting. First, Bab al-Sinjar one of the northern entrances to the Old City district was officially declared freed yesterday. On June 16 however, three brigades from the army’s 9th Division seized a market there. To the north, the Federal Police said they held 30-35% of the Shifa neighborhood. This was despite the fact that the police have been fighting over the same area of Shifa since the end of May, and claimed that it held 60% back on June 11. The Rapid Reaction Division was still struggling over the Old City as well. The pressure from Baghdad to have daily reports of progress and victories is what leads to these contradictory stories and exaggerations.


The National was with a unit from the 16th Division fighting in Shifa. Because of heavy losses the division and other ISF units are relying more and more on air strikes to move forward when they run into resistance. This is leading to large destruction in west Mosul, and a huge number of civilian casualties. There are plenty of people trapped in the neighborhood as well. Many that escaped claimed they were under constant threat from the Islamic State. This was symbolic of the combat going on in the city for months now. The insurgents have been executing and shooting those attempting to flee to try to maintain its hold in its last bastions of Mosul. On the other hand, the ISF have been using more artillery, mortars, and air strikes since the start of the west Mosul battle in February levelling that side of the city and killing and wounding a large number of people as a result.

The Washington Post was the latest to talk with people trapped in the Old City under IS. They discussed the lack of water, food, the sickness and disease that is spreading, along with the constant air strikes and artillery they are living under. Many were afraid to escape under fear of being shot by the militants. Coalition spokesman Ryan Dillon said that the civilian population was always considered in air strikes, but the record shows that not to be true. The rules of engagement are that if civilians are seen around a building it will not be hit, but otherwise they are open game. This is despite the fact that they know civilians are hiding inside many of them or being used as human shields. Of course, if that was considered than no building could be hit because of those fears. That means the Coalition has accepted the high chance of civilian casualties as part of the collateral damage to defeat the Islamic State.

The final battle for Mosul is taking far longer than originally admitted to by the ISF. Ninewa Operations Command’s General Najm al-Jabouri predicted that the city wouldn’t be liberated until July. The head of the Federal Police General Raed Shakir Jawadat said they had underestimated the number of IS fighters they were facing. Originally, they believed there were just 150-300 left, but they had killed 1,800 since the start of June. Iraqi propaganda claimed that this last campaign would be over in just days. That was because IS was supposed to be a defeated force with most of their men dead. This has been repeated for months now however. Again, this is the positive messaging Baghdad has been promoting for years now, and does nothing to explain what is actually going on.

Aymenn Jawad al-Tamimi wrote about his recent trips to Mosul in March and April 2017. First, he noticed the hodgepodge of units securing the city and Ninewa province in general. To the east of the city were various Hashd units. Some were Christian such as in Bartella where two rival groups are attempting to control the town. In Gogajli and the eastern entrances to Mosul there is the Liwa al-Shabak a Shabak Hashd group affiliated with the Badr Organization. Inside Mosul there are the Ninewa police, Rapid Reaction forces, the National Intelligence Agency, the Ninewa Guards, and local tribal Hashd units not affiliated with the Hashd office. There is little to no cooperation between these organizations. They are also not in all sections of the city. In a northern neighborhood for example, Tamimi was warned to stay out due to large criminality and kidnappings going on. Not only is there a complicated security situation, but many of these groups want to establish their own fiefs in the city, and are using their weapons to achieve control. Second, the ISF in east Mosul are a mixed bag as well. The most effective and respected is the Golden Division, which have largely won over the local population, while also being the best unit. On the other hand, the Federal Police and Rapid Reaction Division are full of members of Shiite parties and Hashd units like Badr, Asaibh Al-Haq, Dawa, and Saraya al-Salam. They do not have as good a reputation. Third, life has returned to much of east Mosul, but that is because of local efforts. There are stores and markets open, there are electricity generators supplying neighborhoods, and many of the streets and rubble are being cleared. The government is largely absent from many of these efforts, and a local official accused the provincial and national politicians of being corrupt and stealing money and aid meant for the city. Fourth, Tamimi talked about the legacy of IS upon the city. Everyone he talked to complained about life under the militants. Of course, no one would admit to liking them otherwise they would be arrested. Some did say people greeted the insurgents when the city fell in 2014. That was partly because there were other groups involved such as the Baathist Naqshibandi, not just the Islamic State. Those organizations quickly got pushed aside by IS however. IS was committed to construction and keeping the city clean. There were small projects, the streets were cleaned, and generators were provided for electricity. IS took over the school system and kept it open with its own curriculum. Few students attended however. The biggest complaint was the strict rules the Islamists imposed on the city. It had its Hisba police go after any all violations, which no one liked. Finally, Tamimi warned that if security was not better coordinated, and corruption reduced in the city the Islamic State could make a comeback. The group acted largely as a mafia extorting money, taking over contracts, etc., and could easily return to those tasks if precautions were not taken.

The central government is trying to do small rebuilding projects in Mosul and Ninewa. The Housing Ministry was repairing and opening up streets closed by the fighting in Mosul. It is also working on the water and sewage systems in the city and the Ninewa Plains. Electricity has also been restored to sections of east Mosul. The problem is a much larger effort is needed to fully bring back the city and governorate, but Baghdad has no plan yet and little money to spend.

Another area suffering from a lack of an official plan is revenge against IS sympathizers and their families. The Qaraya district south of Mosul said a local tribe handed out flyers demanding that IS relatives leave in the next 48 hours. They were targeting up to 100 families, roughly 600 people. This followed other reports that another tribe formed a vigilante group and was attacking IS families to try to force them out from other towns in Ninewa. Again, the federal government is absent because it has no reconciliation program. That will leave locals, usually those with guns, to decide the fate of people they blame for the Islamic State. There will be no courts involved, just guilt by association. In turn, there will be resentment, fear and hate amongst these ostracized families who have nowhere to go. This is happening not only here, but in other parts of Iraq that have been liberated as well causing another future dilemma.

In the west, the army’s 15th Division was still advancing on Tal Afar. It took three more towns and was heading for Kask. Tal Afar has been surrounded and cut off by the Hashd for months now. They were hoping to seize the village, but Baghdad didn’t let them due to pressure from Turkey. Instead the army has been given the job.

The Guardian was farther west along the Syrian border in the town of Baaj. The area was recently freed by the Hashd who are talking about building and repairing roads to link with Syria. They are also turning Baaj into a military base. The goal is to connect Iran to Syria and move men and supplies to assist the Assad government. They are also hoping to block traditional routes for foreign fighters to enter Iraq. Many of the Hashd groups in the west Ninewa operation are pro-Iranian and have units fighting in Syria under Tehran’s direction. They see the wars in the two countries as one, and are pursuing Iran’s goals.

Displacement from Mosul is still going up. As of June 15, there were a total of 415,986 displaced (IDPs) in Ninewa. Since the start of June 70,000 have fled Mosul. Before all of the IDPs were sent south to Hamam al-Alil to be processed and then moved to camps or to west Mosul. Now the ISF are taking people directly from the eastern to western sections of the city via a pontoon bridge. From June 10-13 over 7,000 people were checked in east Mosul. People are also returning to west Mosul to areas that are safe.

Bas News, “Federal officer: freed 50% of the Shifa neighborhood and the killing of a senior security official in Daesh,” 6/11/17

Chulov, Martin, “From Tehran to Beirut: Shia militias aim to firm up Iran’s arc of influence,” The Guardian, 6/16/17

Al Masalah, “Reconstruction: We continue to open closed streets in Mosul due to military operations,” 6/16/17

Neuhof, Florian, “West Mosul bears the brunt as Iraqi forces press in on ISIL,” The National, 6/15/17

New Sabah, “The federal police control 35% of the Shifa district north of the old district in Mosul,” 6/16/17