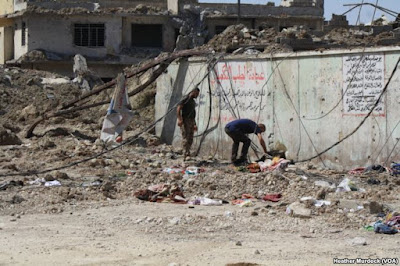 There was fighting across the two remaining areas in west Mosul under Islamic State control. First, the Golden Division had to call off an attack upon Shifa due to heavy fire from IS, especially snipers in hospital buildings and the use of human shields. The Federal Police claimed to have taken Hospital Street in the neighborhood. Unofficially, a Federal Police Captain told Bas News they were in control of 70% of the neighborhood, while another police officer went further saying all of Shifa was freed. June 16, the police were only supposed to have 30-35% of the area, which was below the 60% mentioned on June 11. The Rapid Reaction Division assaulted Tal Zalat, which is one of the entrances to the Old City. Police reinforcements also arrived outside Bab al-Jadid and in Bab al-Sinjar two other ways into the Old City. When the new offensive started at the end of May the Iraqi forces (ISF) moved into the Shifa medical complex and immediately got ambushed by the insurgents and had to retreat. They have been struggling over the area ever since. That hasn’t stopped the Iraqis from claiming they controlled a varying amount of the neighborhood. The actual figure is impossible to say since it keeps going up and down. The Old City on the other hand, will be the last neighborhood taken on by the ISF. It has held up the police for four months or more now. It has a large civilian population, and the IS fighters have been able to successfully exploit the dense layout where armored vehicles are too large to traverse the streets to build formidable defense. The district will eventually fall, but it will be a bloody battle.


The National wrote about how the attrition of the insurgents’ fighting force is leading them to use women in increasing numbers. In the battle for the Zinjali neighborhood, which was the last area freed, female suicide bombers and snipers were deployed. Lady bombers have also infiltrated into the displaced to carry out attacks behind the front lines. Females have also been seen in some of IS’ latest online releases. With the Islamic State’s man power so depleted it has turned to one of its last resources to carry on with the fight. It has proven an effective tactical move as the ISF don’t search displaced women and are reluctant to fire on them when they appear on the battlefield as bombers. This is not the first time IS has deployed women. In 2008 for instance, there was almost a year-long wave of women suicide bombers.

Voice of America had a heartbreaking story on the civilian casualties in the Mosul battle. First, 17 year old Dhiab Idris Abdul Ghani had lived under the Islamic State for three years when he finally found the opportunity to get away. When the ISF reached his neighborhood he and his younger cousin tried to make a break for it. Dhiab was shot. His father Hazzam and his uncle went looking for him amongst the rubble and found him 13-14 days after he was killed. Second, VOA also talked with a man whose cousin’s house was hit by an airstrike. He said 23 people were trapped in the rubble. He made it to ISF lines and was told to register and get a number to have them dug out. By then he thought everyone was dead, but he still wanted the bodies for a proper burial probably. Civilians have suffered by far the largest casualties in the fighting. In west Mosul especially, there has been a greater use of air strikes, mortars, and artillery, and more executions by the Islamic State, and killing of civilians attempting to flee. The true figures will likely never be revealed but they have to be staggering. 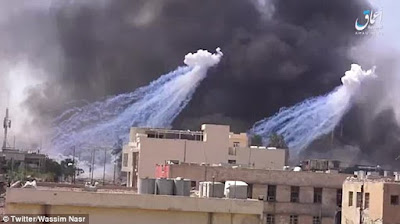 After an investigation and official denial by the Iraqi forces it turns out the U.S. led Coalition has used white phosphorus in west Mosul (Daily Mail)

It turns out the U.S. led Coalition did use white phosphorus in Mosul. At the start of June, a Kurdish television station filmed what looked like phosphorus shells exploding over a west Mosul neighborhood. The ISF claimed they investigated the matter, and found it was not phosphorus but smoke shells. The fact that phosphorus is supposed to be used for smoke was a loophole in their story. Later a New Zealand General Hugh McAslan admitted to National Public Radio that phosphorus had been fired in Mosul to cover civilians trying to flee IS. The problem with phosphorus is that if it hits the ground it works as an incendiary burning both materials and flesh at extreme temperatures. The Iraqis are completely averse to any bad news emerging from the battlefield. This is one of many times they have denied and obfuscated what happened in the Mosul campaign. Simply put, when it comes to these types of situations the Iraqis are a completely unreliable source.

Al Aalem, “The anti-terrorism forces retreated from storming the medical compound in western Mosul because Daesh hiding behind civilians,” 6/17/17

Bas News, “The liberation of 70% of the Shifa neighborhood and the retreat of armed men to the Farouk neighborhood,” 6/17/17

Hathaloum, “Joint operations deny the use of phosphorus in Mosul and confirm the use of smoke,” 6/4/17

Iraqi Media Network, “The federal police are preparing to liberate the Nuri Mosque the last stronghold in Mosul,” 6/17/17

Murdock, Heather, “Mosul Battle: Searching for Bodies in IS Rubble,” Voice of America, 6/16/17

New Sabah, “The arrival of large military reinforcements to liberate the old city in West Mosul,’ 6/17/17