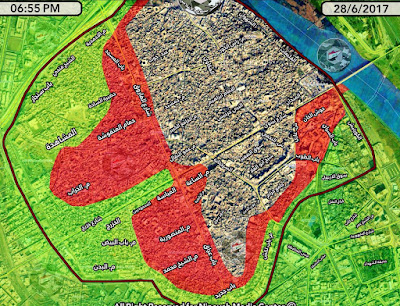 The Iraqi forces have completed the first phase of the Old City battle, dividing the district in two and taking the western section. Green = liberated, Red = contested, Gold = IS control (Ninewa Media Center)

There were more advances in the Old City district of west Mosul by the Iraqi Security Forces (ISF). The Federal Police seized Hkatoniya and Katunya in the center and were heading towards Farouq Street, an area that was said to be freed before, while the army’s 16th Division took Hadra al-Sadaa and Ahmadiya in the north. The Iraqi forces (ISF) were also pushing towards the south at Bab al-Bawab, Arjkhana, Bab al-Jadid, and Bab al-Lakash, and east into Farouq 2. Federal Police Chief General Raed Shakir Jawadat claimed that 70% of the Old City was now under government control. The ISF have completed the first part of its strategy for the district. The north to south thrust has been accomplished now giving the government forces control of most of the western half of the district. The final move is from west to east to reach the Tigris and again divide the Old City in two. Units are also moving along the northern and southern perimeter to finish off the pincer move. That will divide the defenders into smaller, and more manageable groups to destroy.


The Islamic State attempted another infiltration into liberated Mosul. Five IS fighters were caught trying to cross the Tigris River from west to the east in the city. They were carrying a number of weapons and explosives. The day before another group of IS members were killed doing the same thing. Every day since June 23 the insurgents have been trying to carry off attacks in freed parts of the city, some successful and some not.

IRIN News talked with people coming out of Mosul. Many talked about sheltering in their basements to escape the fighting. One person said there were up to 300 people in one seller. Some said they had spent months in them. Despite the relative safety they provided many commented that they were always afraid of an air strike hitting their building, which would mean everyone in the basement would be trapped and likely die. This was just the latest story about the hardships that people trapped in the city have faced. That goes along with their use as human shields by IS, executions, getting hit by mortars and artillery, starvation, etc. These experiences must be causing extreme trauma.

Al Noorn News, “Ninewa We Are Coming: liberation of Hadra al-Sadaa and Ahmadiya in the Old City,” 6/28/17