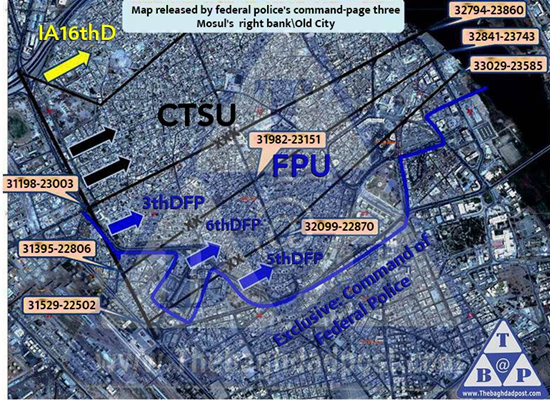 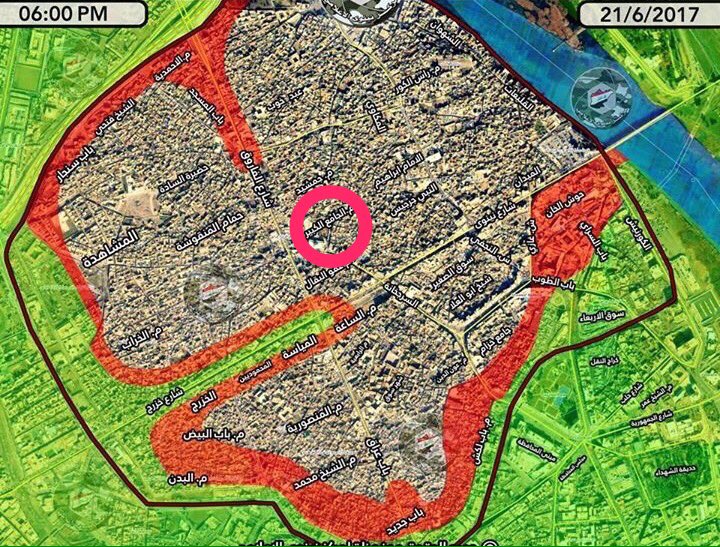 As the battle for Mosul comes to a close the Islamic State destroyed the iconic Nouri Mosque and al-Hadbaa Minaret. IS blew up the historic site, while claiming that an American airstrike was responsible. The destruction of the mosque was due to the rapid advance of the Iraqi Security Forces (ISF), which were said to be only meters away. The Federal Police were moving from the south on Bab al-Jadid and Ras al-Jada. The Golden Division and the army’s 16th Division were in the northwest in Farouq. The Rapid Reaction Division was coming down from Shifa in the northeast, which was recently freed. The army’s 9th Division was doing clearing duties in that neighborhood, and then will move along the Tigris River. The strategy is to attack upon multiple fronts and converge towards the middle dividing the Old City into several sections, which will then be swept through.


BuzzFeed wrote about the human losses caused by airstrikes in Mosul. It documented seven houses that were hit by planes where civilians were killed. Sometimes they were targeted because the Islamic State was nearby and sometimes they were not. People said they lived in fear because anytime there were IS men around they felt like they could be targeted by the Iraqis or Coalition. The Americans claim they have plenty of checks on airstrikes, but there have been more since Trump became president, and the authority to call them in has been devolved to lower ranking officers. The U.S. led Coalition only has two people investigating casualty cases, and has only been able to look through a fraction of them. The Iraqis were not a focus in the article, but they have been far more indiscriminate especially with artillery. The Federal Police for example have been singled out for using artillery anytime they run into opposition. All together this has led to a huge number of casualties.

The divisions created by the Islamic State continued to impact Ninewa. Rudaw had another report on the group in Qayara, south of Mosul that is trying to expel IS families. The group said relatives of IS would be free to leave, but if they stayed they would face tribal justice. The Qayara government supported their efforts. The Ninewa council announced that feuds had broken out in several displacement camps outside Mosul over suspected IS members and their families living there. Yesterday, the Mosul city government also let it be known that they would not allow any IS families to live there, and they would be sent to special camps, which have yet to be created. A Ninewa policeman said that families could not be punished for the actions of their family members, but the central government is completely absent from these matters. That means local officials, tribes, civil groups, and people with guns are able to dole out their own forms of justice, which consist of group punishments.

Displacement from Mosul continued, while the Displacement Ministry wants more people to return. The United Nations counted 425,982 displaced on June 20. From June 18-20 11,000 fled Mosul. Most came from Shifa, which was just freed. The ISF is now moving people from west to east Mosul via a pontoon bridge and 9,000 have recently taken that route. The Displacement Ministry pointed out that most of the city was now liberated, but many people are not going home. They want that process to increase as many camps, especially those south of Mosul are full or over capacity.

Al Ghad Press, “The commander of the anti-terrorism forces told Al Ghad Press: one area separates us from the liberation of Farouq district and killed 300 Daesh,” 6/21/17

Giglio, Mike, “These Are the Civilian Victims Of The US-Led Campaign Against ISIS,” Buzz Feed, 6/19/17