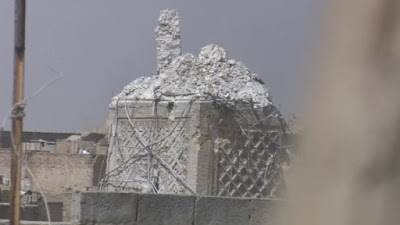 The Iraqi Security Forces (ISF) were still pushing into the Old City of Mosul from multiple directions, and struggling over Shifa. The Federal Police were fighting over Bab Lakash and Bab al-Baid, two of the entrances to the district, and received reinforcements as well. The Golden Division held 60% of the Mashdah area, which is where the destroyed Nouri Mosque is located. The Defense Ministry officially declared the Shifa neighborhood north of the Old City freed, but in fact, the Rapid Reaction Division was still attempting to take some buildings in the medical complex. The ISF are always over anxious to publicize its victories, and that also leads to many situations like these where an area is called cleared when it’s not.


The rapid advance of the ISF led the Islamic State to blow up the Nouri Mosque and al-Hadbaa minaret, two ionic structures in the city and Iraq. Prime Minister Haider Abadi called the destruction a sign that IS was defeated in Mosul. The head of the Ninewa council’s security committee noted that 50-70 nearby houses were leveled in the explosion, and there were civilian casualties as well. IS has no respect for historical structures, and has used blowing up the mosque as part of its propaganda blaming a U.S. Coalition air strike was responsible.

Baghdad is upset that the Mosul city council wants to expel IS families, but it looks like that will go into effect. Recently the Mosul government passed an ordinance banning insurgent families from returning. That has to go to the Ninewa council, which according to the Wall Street Journal will approve it. Prime Minister Abadi on the other hand stated that no family should be punished for the act of a relative. A member of the National Intelligence Service told the Journal that they had been ordered by Baghdad to stop any deportations. The city is just the latest to follow this trend of holding families guilty. It’s important that the premier said something, but the central government has no reconciliation program so there is nothing to counter these types of actions.

Over 55,000 have been displaced since the start of the final push on Mosul. On May 25 before the offensive started there were 377,406 displaced (IDPs). By June 22 there were 432,726, a 55,320 increase. 54,606 of those people left in the month of June. According to the Children’s Affairs Committee around 40,000 kids from Mosul have been separated from their families during this huge movement of people. 193,956 others have returned so far. With the battle almost over that figure will start going up soon. At the same time, it might be a drawn out process because much of west Mosul is destroyed, and people will have little to go back to.

Al Aalem, “Field Commander To Al Aalem: Preserving Al Hadbaa and the Grand Mosque cost us a lot of blood … And its destruction by Daesh accelerates its end,” 6/22/17

Iraqi Ministry of Defense, “The 9th Armored Division controls all of Shifa district and Fifth Bridge separating the Old City and the neighborhood itself,” 6/22/17