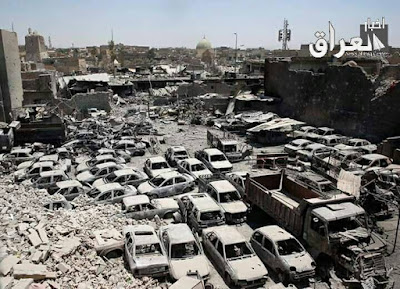 The Iraqi forces (ISF) made a huge symbolic victory finally capturing the Nouri Mosque and making other advances in west Mosul. Ninewa We Are Coming commander General Abdul Amir Rasheed Yarallah announced that the mosque and the Islamic State’s headquarters in Sargkhana, both in the Old City, were freed by the ISF. Bab Lakash, Bab al-Jadid and Bab al-Baid, which has been declared liberated twice, were still under siege, and the government’s troops were also moving towards Makawi and Shahar Suq. To the north Shifa was said to have been captured for the fourth time. According to the government the capture of the Nouri Mosque meant that the Islamic State’s caliphate was coming to an end. That was where IS declared its state three years ago. After three months of heavy fighting the ISF finally seized it. These latest advances still leave roughly half of the Old City under insurgent control.


Predictably, taking the Nouri Mosque led to Iraqi propaganda to go into overdrive. After the fighting was over the Golden Division claimed it killed 60 IS members in combat around the mosque. Shortly afterward the unit’s commander General Abdul Ghani al-Asadi upped that figure to 600 dead. The spokesman for the division then added that no part of Mosul was under IS control, and only scattered insurgents were in two areas. First, the ISF have been saying for days now that they believed there were only 300-400 IS left in the entire Old City district. That made it difficult to understand how the fatalities at the mosque not only increased 10 times, but were more than all the insurgents in the entire district. Second, the government’s own maps show that half of the Old City is still under IS control. This was just the latest example of the hyperbole that has become synonymous with Iraq’s victory narrative over the last three years.

A doctor working with the ISF told the press that over 200 civilians were killed in the combat in the Old City over the last week. Dr. Saadullah Khafaf said 204 people had died, half of which were children. That did not include civilians killed and trapped in their homes. Despite the Iraqi and U.S. led Coalition claims that they are attempting to avoid civilian casualties most of the IS held territory is considered a free fire zone with plenty of examples of homes being hit with no militants nearby. That along with IS firing mortars into areas indiscriminately, executing people, and using them as human shields has led to horrendous casualties.

There were continued concerns of IS operations in the liberated sections of Mosul. The Federal Police conducted a large search and arrest operation throughout the city to find sleeper cells. They warned of insurgents dressed as members of the security forces. This happened after a recent suicide bombing in a market in east Mosul where IS fighters were dressed as members of the Golden Division. That was followed by two more bombers being killed in Nabi Younis, on June 29 that were wearing Federal Police uniforms. Another bomber was arrested in Zuhur. That marked the sixth straight day the Islamic State had attempted operations in the freed parts of the city. Few of them have been successful thankfully.

For some unexplained reason the number of displaced in Ninewa suddenly doubled. On June 28, there were 435,216 registered displaced (IDPs). The next day that went up to 819,534. No reason was given for this huge increase. The United Nations did report that amount of people returning had dropped the fourth week of June. That was because of the IS attacks in freed areas of Mosul had scared people. The U.N. was also in contact with people that had gone back to the city. They found that east Mosul and the town of Bartella there was electricity on most of the time, but clean water only every two days. In comparison, in the west, there was not only no access to the power grid but few generators either. The east obviously was freed first, and escaped a lot of damage. There has been a lot of grassroots and government rebuilding there. The west however, has largely been flattened, and because of the continued combat there is little help available there so far.

Iraqi Ministry of Defense, "The 9th Armored Division controls all of Shifa district and Fifth Bridge separating the Old City and the neighborhood itself," 6/22/1

March 14, “Federal Police And Rapid Reaction Liberated The Medical Complex IN Al-Shifa District On The Right Bank of Mosul,” 6/29/17

Al Mayadeen, “Iraq: Ninewa We Are Coming Operations Commander Yarallah: the liberation of the Republican Hospital by the Emergency Response Division and the Obstetrics Hospital and Dental College,” 6/29/17