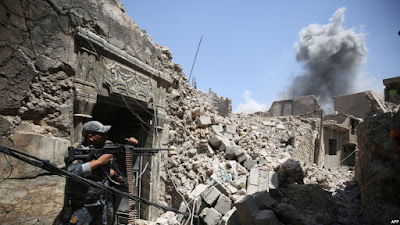 The Iraqi forces (ISF) are making rapid gains in the Old City of west Mosul. The Federal Police claimed they freed Bab al-Lakash in the south of the district, but there were multiple reports that fighting was still going on there. Also in the south the army’s 16th Division seized Farouq 2 and Masnouriya, while the Golden Division were moving in the center and north and took Shahar Suq, Nabi jarjeesh, and Abdul Khoob. Heavy clashes were also going on in Bab Jadid, Sargkhana, Mashahj, Bab al-Bakr, Qurnish, Bab al-Baid and Khazraj. Those last two have been declared liberated before. The Federal Police and Rapid Reaction Division were also clearing out south Sargkhana in the Old City and the medical complex in Shifa, a neighborhood to the south of the district along the Tigris River. After taking Nouri Mosque the ISF are continuing with their multi-pronged attack against the Islamic State. The three thrusts into the Old City, north, center and south, has now been joined by a fourth coming down from Shifa along the Tigris River. From the start the plan has been to divide up the district into smaller and smaller parts and then destroy the IS fighters contained within. The Golden Division’s General Abdul Ghani al-Asadi believes there are only 200-300 IS left in the Old City, and while the Iraqis are pushing the theme that things will be over in a few days it would not be surprising if it was a bit longer than that.


For the last seven days the insurgents have been attempting to carry out operations in the liberated areas of Mosul. Three suicide bombers were killed in Yarmouk on the western edge of west Mosul. A fourth was found and met a similar fate a short period later. Yarmouk was one of three neighborhoods IS launched a successful surprise attack upon a week ago. In response, the Defense Ministry held an emergency session with all the different security forces involved in the city, the police, the army, the Hashd, and the intelligence agencies. They reportedly came up with a new security plan for the city, which will be rolled out in the following days. The major problem is that there are so many different units all operating under their own commands with no real cooperation. Some areas in the west have little to no security at all because there are not enough forces available. Those are all reasons why the militants have been able to carry out so many violent acts in the last few days.

Human Rights Watch issued another report on abuses of IS suspects by the ISF. It talked to several witnesses that saw members of the police and army seize men in crowds of displaced and beat them. Members of the ISF have also talked about killing their detainees. A Swedish paper recently talked with a Federal Police officer who bragged he had beheaded 50 IS fighters and showed off pictures and videos of his actions on his phone. One man said that with victory so close the ISF are no longer afraid to hide they abuses and were now doing it openly in front of people. For years now the Iraqi forces have had a history of abuses, torture, and extra judicial killings. The rise of IS in 2014 has only increased these cases as anyone suspected of being associated with the group is considered void of their humanity, and committing crimes against them is not only accepted, but actually cheered by members of the public. That has only increased the brutality of the Iraqi forces, which might have a lasting impact upon them.

This mood is having a larger affect upon Iraqi society as Ninewa is the latest province to start group punishments against IS families. The United Nations also pointed out that Shirqat in Salahaddin and Hit in Anbar, along with Qayara and Mosul in Ninewa are witnessing organizations telling families with IS members to leave their homes or be kicked out. Many times tribes are behind these actions. Hundreds of families have been threatened as a result. The U.N. called on Baghdad to intervene. Reportedly Prime Minister Haider al-Abadi is against these actions in Ninewa, and has told the intelligence agencies to stop any deportations. The problem is with so many different security forces working in the governorate and the ill will versus IS so virulent the government doesn’t have the power to stop this from happening. It also doesn’t help that Baghdad has no reconciliation plan that it can offer as an alterantive.

Finally, in western Ninewa along the Syrian border the insurgents carried out three attacks. These occurred in the Sinjar district. The Hashd fought off all of them and claimed the militants were coming across from Syria. Since reaching the border area the Hashd have been setting up bases in places like Baaj, and displacing the population to keep it a security area, which they can control. IS has only occasionally struck back, usually with rockets and mortars, but an occasional infantry thrust as well. The open ground makes it easy to locate and destroy them.

AIN, “Security forces continue to choke Daesh and expect the liberation of west Mosul within days,” 6/30/17

Al Sumaria, "A fourth suicide bomber was killed in the Yarmouk area of Mosul," 6/30/17

Xinhua, “Iraqi forces recapture neighborhood amid advance to clear Mosul of IS militants,” 6/30/17