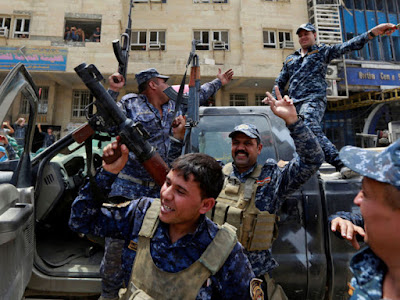 The news of the day was whether Mosul was finally liberated or not. The Joint Operations Command got things underway by saying that the city was free, but then added that there were small pockets of resistance. That last caveat was missed by most leading the command to issue a clarification that there were still a few meters of the city under Islamic State control. It then added that a victory announcement was imminent and that fighting would be over in a few hours. Units of the Iraqi forces (ISF) were seen celebrating in the streets. In fact, at the start of the day there were still three contested neighborhoods, Maidan, Qalahat and Shahwan that were under attack by the Golden Division and the army’s 9th Division. By nighttime the Islamic State was reduced to small pockets, but were holding a number of civilian captives. It was predicted that by July 9 those would be wrapped up. Prime Minister Haidar Abadi already flew into the Qayara base northeast of Mosul, and was expected to give a victory speech. The campaign took nine long months. It witnessed some of the toughest urban fighting seen in years. While the war against the Islamic State is far from over, this will be a huge symbolic and political victory for the Iraqi government. Three years ago, IS declared its caliphate in Mosul, and now the Iraqi forces are standing over the rubble of its state.


There was still some heavy fighting going on. IS launched an attack upon Badush northwest of Mosul. More importantly, the militants still held the town of Imam al-Gharbi in the Qayara district, and were threatening the base there, which the premier flew into. IS seized the village on July 5, and have successfully fended off counter attacks by the Iraqi forces since then. It appears to be a more serious situation than the Iraqis are letting on.

With combat winding down the issues of governance and rebuilding are more pressing issues. Unfortunately, Baghdad has little to offer. The Abadi government was supposed to form a committee with the Kurdistan Regional Government and the U.S. led Coalition to plan for rebuilding Mosul, but it never happened. Sunni and Kurdish leaders in Ninewa also complained that the prime minister never responded to their calls to talk about the future political situation in the province. That was actually understandable, because any agreement on governance could have been broken by creating facts on the ground during the campaign. Not coming up with a reconstruction strategy however was pure negligence. Given past campaigns in places like Fallujah and Ramadi it was expected that there would be considerable damage that would need to be fixed. The Planning Ministry is working on a $100 billion, 10 year plan, but that is for the entire country. The fact that Iraq doesn’t have the money to pay for it, and is hoping international donors and the World Bank will fund it may make it mostly aspirational.

Life goes on in Ninewa with ups and downs. In east Mosul life seems to be almost back to normal. Shops are open, kids are going to school, business is not booming, but things are moving. That contrasts to the west where there are no services, and things are much more of a struggle. People were still optimistic about the future despite the problems. Meanwhile, displaced in camps are trying to decide when and if they will return to the city. One man fled west Mosul, went back for a short time, and then left again. He said there was no work and no stability in the city. After he came back IS launched a large attack in his neighborhood. He told Reuters he thought the camp was safer than Mosul. Another man said he wanted to return, but he had no money to do so, especially with rent rising due to demand. A woman talked about how she felt Mosul was unstable and insecure, and she did not want to go back as a result. These are all part of the successes and struggles people are going through in the aftermath of the Mosul campaign. There is a huge amount of resiliency shown, as well as some fears about what the future may bring.

Bas News, “Victory Over IS in Mosul to Be Announced in Next Few Hours: Official,” 7/8/17

Cahill, Petra, “In Battle Against ISIS in Syria and Iraq, Civilians Suffer Most,” NBC News, 7/8/17

Al Forat, “The security forces have been attacked by Daash south of Mosul,” 7/8/17
- “URGENT The reason why the victory statement was not announced tonight,” 7/8/17

Iraqi Media Network, “The joint operations issue an explanation of the situation in old Mosul and confirm the existence of a few meters to be freed,” 7/8/17
- “Nineveh Operations announces the liberation of Dakkat Barka in old Mosul,” 7/8/17
- “This is what remains before the announcement of final victory in Mosul,” 7/817

Al Mada, “The battle of Mosul is coming to an end with the arrival of troops to the last bastions of Daesh,” 7/8/17
- “Besieging Daash forces that infiltrated village in south Qayara,” 7/8/17

New Sabah, “Liberation of the old city of Mosul with the arrival of the joint forces to the Tigris River,” 7/8/17