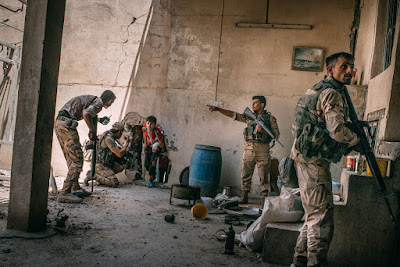 The Iraqi forces (ISF) were cleaning up the south in the Old City as well as pushing to the Tigris River in west Mosul. Bab al-Tob, one of the southern entrances to the area was declared freed for the second time. The Federal police took Sargkhana Street, Tawalib, Bab al-Saray again, and Katunya for the third time. Maidan, one neighborhood away from the Tigris, Nujafi, and Shahwan, which is on the Tigris were under siege as well. Federal Police chief General Raed Shakir Jawadat claimed only four neighborhoods were left under Islamic State control, Nujafi, Bab al-Saray, Bab al-Lakash, and Bab al-Jadid. Interestingly, all of those except Nujafi have been cleared before, and he did not include other areas which were still contested.


A variety of officials stated that July 6 victory in Mosul would be announced probably prematurely. The head of the Ninewa Operations Command, a Ninewa councilman, and the province’s deputy governor all remarked that July 6 the government would claim victory in the campaign. That was denied by the Joint Operations Command however. Given the number of neighborhoods still contested it is highly unlikely that the city will be freed by then. That has not stopped Baghdad before however. Prime Minister Haidar Abadi for example, already complimented the ISF for winning the campaign. Everyone knows that things are coming to an end, but the Iraqis can’t seem to wait for the finale.

The threat of IS infiltrations and attacks upon liberated areas of Ninewa continued. The Golden Division’s General Sami al-Aridi warned that IS members were trying to escape with the displaced by shaving their beards and changing their clothes. Three IS fighters were arrested in east Mosul planning an attack. Yesterday, four suicide bombers were killed in Wadi Hajar in the southern section of the city. The insurgents made a large assault upon Qayara southeast of Mosul as well, killing 2 tribal Hashd and wounding another 25. Nearly every day for the last two weeks the militants have been carrying out operations inside and out of Mosul. While some of these have been to draw forces away from the front, most are simply aimed at sowing disorder and showing that the group is enduring, one of its catchphrases.

IS’s activities have raised tensions between the security forces and the displaced as well. The Associated Press reported that the Iraqi forces are increasingly accusing people coming out of the city as being IS relatives. They were also being more suspicious and stand offish with the people, fearing suicide bombers.

The ability of IS to carry out these attacks is in part due to the nature of security in the city. Ninewa councilman Hossam Abar noted that there are not enough police in the province to protect it. That means that the army’s 16th Division and tribal Hashd units will be used to hold Mosul. None of these forces cooperate with each other, and sections of west Mosul are only lightly guarded. It doesn’t appear this dilemma will be resolved any time soon.

The United Nations estimated that it will cost $1 billion to rebuild basic services in Mosul. Lise Grande said that would be the bill for restoring water, sewage, electricity, re-opening schools, and hospitals. According to her the city has seen the heaviest damaged of the entire war. Beforehand, the Iraqi cabinet was talking about $1 billion for reconstructing the entire country. Baghdad is still struggling with low oil prices, so it was talking about going to donors and the World Bank for loans to raise most of the money, but that will be a challenge given the fact that it has not gotten much so far from the international community. The U.S. for one has said that it will not help with the post-war situation.

Save the Children warned about the psychological damage the war was having upon the youth of Mosul. It did a study of 65 children at a displaced camp south of Mosul. It found 90% of them had lost a family member. They had seen their relatives killed in front of them, dead bodies in the streets, and bombs destroy homes. 78% reported that they had nightmares about “things” and “monsters”. When asked about the three years of life under IS they stated that they were in constant fear of breaking the rules and being punished. Their parents were also mentally scarred. 85% of the kids said they were beaten by their family, another sign of stress and anger. This was another example of the lasting affect the Islamic State has had on Iraqi society. These children may never recover, and the abuse they are facing from their parents will only make the situation worse.

People are still fleeing the combat zone. The United Nations recorded 608 arriving at Hamam al-Alil the main screening center south of the city. Another 1,408 went directly to east Mosul, which is snow accessible by a bridge. The ISF believes there are a few thousand more people in the remaining sections of the Old City under IS control. New data shows that over one million have been displaced during the Mosul campaign. Over 800,000 of those are still living in camps or outside Ninewa province.

AIN, “Commander of Nineveh operations: Thursday last date for the liberation of all of Mosul,” 7/4/17
- “The federal police control the Al Shawaf building in Old Mosul,” 7/5/17

Iraqi Media Network, "Federal police liberate Bab al-Lakash in the southern axis of the Old City," 6/30/17
- “Video: Anti-terror forces besieging the rest of the Daesh members in the old city of Mosul,” 7/5/17

Kelly, Mary Louise, “In Iraq, Fight To Retake Mosul From ISIS Appears To Be In Its Final Sages,” NPR, 7/5/17

Al Maalomah, “Abdul al-Ghani al-Asadi confirmed to Al-Maalomah that there is no escape for the remaining Daesh,” 7/5/17
- “Arrest of Daesh who infiltrated with the displaced on the right bank of Mosul,” 7/5/17
- “Who will hold the land in Mosul after liberation?” 7/5/17

Al Mada, “The presence of civilians forcing the joint forces to slow their advance in old Mosul,” 7/5/17

New Sabah, “The liberation of Bab al-Tob and the Khuzam mosque in the old city,” 7/5/17

Save the Children, “Mosul’s children mentally scarred by brutal conflict,” 7/5/17

Shafaaq News, “Arrest of three members of Daesh in Zahra in Mosul,” 7/5/17

Al Sumaria, “Joint operations denies what has been circulated about setting the date for the declaration of victory,” 7/5/17