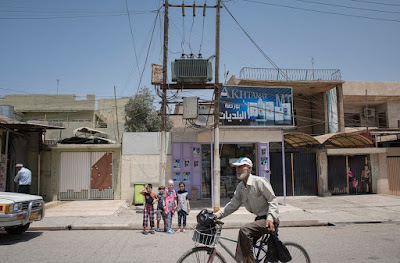 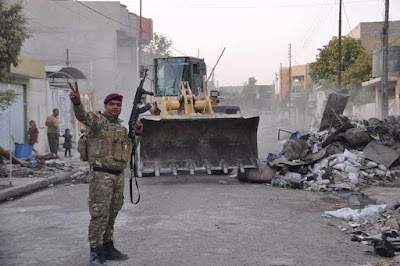 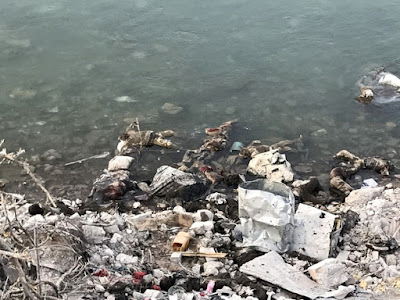 Several dead bodies showed up in West Mosul, but they were all Islamic State members. Three corpses were discovered shot in the head and handcuffed under one of the destroyed bridges across the Tigris River. There have been reports of other corpses turning up, blindfolded, showing signs of torture, and execution. An army major told Middle East Eye that an order had gone out to kill any IS elements they found in the city. Stories of these extra judicial killings have been going on for several days now. There are still arrests going on however, so the major’s story has to be taken with a grain of salt.


Another narrative which has recently been in the press has been some Iraqi Security Forces (ISF) helping militants escape Mosul. Bas News had a story that 9 officers from the army and Federal Police, and around 30 other soldiers have been accused of smuggling IS members out of the city and providing them with supplies. Local officials have also allegedly been implicated. Al Ghad Press, had a less believable story that insurgents were using fake IDs to join the tribal Hashd units working inside Mosul. The ISF are notoriously corrupt, so it is possible some have taken bribes from IS members. Joining the tribal Hashd seems very improbable. The risks of being discovered seem too great, and if they had false papers why would they decide to stay? It’s too soon after the battle for the organization to have come up with some type of infiltration plan into the security forces. The story sounds like disinformation spread by a rival of the tribal Hashd in Mosul.

IS families have recently been singled out for persecution in Ninewa province. A part of that equation is the children who were the offspring of Islamic State fighters. The head of the Office of Women and Children in Ninewa told the Guardian that she believed that up to 75% of the orphans from the city were the children of insurgents. She claimed there were 600 IS orphans in Hamam al-Alil camp alone. The Guardian talked with a boy who was found in a tunnel in Mosul with several dead militants. His dad was a fighter who disappeared during the combat. The child himself fought as a sniper for the organization. Belkis Wille from Human Rights Watch said one big problem was children were treated as adults by the Iraqi courts, and that there were no rehabilitation programs for them because they would likely get life in prison if prosecuted so why think about their future. What to do with these children is another unknown factor in the rebuilding of the city and Ninewa in general. As of now, the trend is to punish them simply for being associated with the Islamic State even if they themselves never did anything wrong.

Mosul continues to rebuild. Schools in the east re-opened several weeks ago, and now that is happening in the west. 83 schools with 58,800 students were back at work in that half of the city. They received support from the United Nations. In the east, there are already 336 schools operating with 288,500 pupils. The schools in the west lack electricity and supplies, and are overcrowded as families attempt to enroll their children. Teachers are also not being paid. Getting the education system back up and running is a very important step for the city. Since 2014 many children did not attend the IS run schools so are far behind their peers in the rest of the country. They also bring a sense of community in the areas where the schools are open.

Another step in the reconstruction process is putting all the historical sites in Mosul back together. A geologist Faisal Jeber is attempting to do that. His first project is the Prophet Jonah site in the east. IS not only blew part of it up, but excavated the area looking for artifacts to sell. Some clerics have claimed the site for a new mosque so Jeber has some competition. Mosul was full of ancient history almost all of which was damaged or destroyed in the fighting. They are likely not a priority for the government compared to everything else that needs to be taken care of. That leads individuals like Jeber to try to fix them. A huge task, but once again shows the resiliency of the local residents.