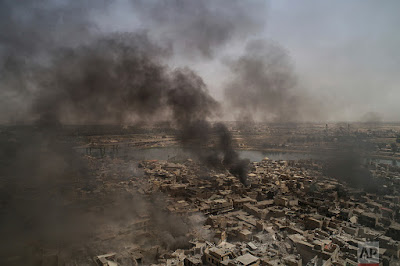 The Islamic State is now down to three neighborhoods in the Old City of West Mosul. July 6, they held Bab al-Tob in the south, Qurnish, Shahwan, Maidan, and Najafi Street along the Tigris River. The Iraqi forces (IFS) announced Maidan and Najafi Street were seized. The insurgents were still desperately fighting, and launched a counter attack with 50-100 fighters into Bab al-Lakash, which was recently freed, Bab al-Tob, and Maidan, throwing the ISF back on their heels in some of those areas. Still the end is in sight, and Iraqi commanders continue to try to claim they are nearly done. Federal Police commander General Raed Shakir Jawadat said his forces were 99% finished with their combat missions, which contradicted his own statement on July 3 that they had completed their tasks already. The Golden Division was more circumspect simply stating that things were winding down. Yesterday there were a few reports that Mosul had been completely freed, and Prime Minister Haidar Abadi already congratulated the ISF on their victory in the city. This is the norm for Iraqi propaganda that is obsessed with claiming real and imagined advances.


The militants launched a large and serious counterattack in the Qayara district southeast of Mosul a few days ago, and still hold a village. On July 5, IS attacked four towns with up to 160 fighters. It seized control of Imam al-Ghabi. The ISF took back half of the village, but the fighting continues. It was serious enough that the Defense Minister Irfan al-Hayali went there to supervise the battle. Former Ninewa governor Atheel Nujafi’s Ninewa Guards are involved as a senior commander was hit by a sniper. The International Organization for Migration also temporarily halted its operations in two displaced camps nearby. ISF officers thought this was a diversionary attack to draw attention away from Mosul and allow IS elements to escape. The fact that they seized a town however would contradict the latter claim as movement not holding would be paramount in any breakout attempt.

July 6 two suicide bombers were also killed in Hamam al-Alil, which is the main screening center for displaced coming out of Mosul. This could have been the result of a sleeper cell or IS members hiding amongst the people fleeing the city.

Returning life to Mosul has its ups and downs. The United Nations and Australian government helped re-open the Mosul General Hospital maternity ward, which is on the west side of the city. Getting these institutions up and running again are important steps to achieve normality. It’s especially significant because this occurred in the west, which is mostly destroyed from the fighting. On the other hand, many people going back to the city have found their homes damaged and destroyed and need a place to stay. That demand has doubled to tripled the price of housing. Few residents have any money however. The city council has called for lower rents, but no one appears to be listening. This is the flipside of rebuilding. Many people are borrowing money or relying upon others to pay for basic necessities like food. Covering sky rocketing homes however, might be outside their limited means. Like the rest of Iraq, Mosul relies upon the government for most of its income, and while some government workers like teachers and local officials are back to work, they have not been paid yet. Private business outside of markets and small shops are also not operating yet. Together that means there is only very limited income coming in right now.

The United Nations did a damage assessment of the Old City district in Mosul using satellite imagery. It found that 5,536 structures were damaged. 490 were destroyed, with the rest severely to moderately affected. While the east escaped most structural damage the west has mostly been flattened. The U.N. estimated it would cost $1 billion to restore basic services. There are no studies on how much it will be to repair all the buildings. On top of that, Iraq has no rebuilding plan in place and little money. It is hoping to get it from the international community, but it has not gotten that much so far, which means it will be up to the residents of the city themselves to put the city back together.

Ahmad, Rezan, “Commander in the anti-terrorism forces: Our forces are about to resolve the battle of Maidan,” Bas News, 7/7/17

Al Ghad Press, “Free Najafi area and waiting for the announcement of the freeing of the entire old city,” 7/7/17

Iraq Newspaper, “Iraqi Newspaper Reporter In Mosul: Terrorists Are Calling For Attacks On The Iraqi Forces In Maidan, Bab al-Tob, and Bab al-Lakash,” 7/7/17

Al Mayadeen, "Iraq: Al-Mayadeen reporter in Mosul: violent clashes on the banks of the Tigris River between anti-terrorism forces and Daesh in Maidan," 7/7/17

New Sabah, “500 meters from Old Mosul witnessing the last hours of the battle and full liberation,” 7/7/17