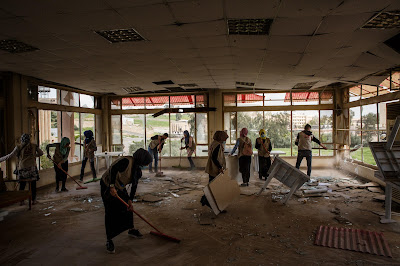 The ninth month of the Mosul campaign saw another day of advances. First, the Rapid Reaction Division freed Shifa north of the Old City district along the Tigris River for the fifth time. The Iraqi forces (ISF) entered the neighborhood at the end of May and immediately got caught up in the medical complex. Iraqi propaganda obscured exactly what happened but either the hospitals were constantly changing hands or the Iraqis never cleared them completely until now. The Ibn Sina Hospital for example was taken on May 28 and then again on July 1.


Inside the Old City more areas were seized. The Federal Police took the western end of the Iron Bridge across the Tigris, along with Bab al-Jadid and Suq al-Arbea in the south. There was also fighting in Maidan, Rabia, Bab al-Bakr, Shahwan, Khatoon, Ras Khor, Imam Ibrahim, Qaliat, Sargkhana, Qataniyan, Suq al-Sagha, and Bab al-Lakash that was liberated yesterday. Taking the bridge was the result of the newest thrust in the district down from Shifa south along the Tigris River. The army, police and Golden Division are also pushing down the middle of the Old City, and the northern and southern perimeters to divide and entrap the insurgents.

The Iraqi campaign is being supported by the U.S. led Coalition. The Associated Press followed a unit from the 82nd Airborne Division that were operating inside Mosul. One of their jobs is to help coordinate the different ISF units that are working in the city under different commands, and make sure there are no friendly fire incidents. They are also calling in air strikes. Part of the Trump administration’s new policy is to forward deploy U.S. advisers along the front, and cut the steps necessary to authorize bombing by Coalition planes. Other members of the international alliance such as the British, French, Australians are also said to be working in Mosul.

The Iraqi civil defense forces that are responsible for clearing rubble and digging up trapped civilians discovered an Islamic State plot to destroy the Zinjali neighborhood in west Mosul. A series of IEDs and explosive belts all apparently strung together were found in the area. It was believed the insurgents were planning on detonating them after civilians began returning. Luckily, they were dismantled.

Rebuilding Mosul continues. Students are volunteering to try to clear and rebuild Mosul University. The Los Angeles Times talked with a teenage girl who was in high school in 2014 who wanted to go to Mosul University when she graduated to become an architect, but that was put on hold when IS took over. Now she is helping at the campus and hopes to enroll there. Some parts of the school are untouched, some are completely destroyed. Classes have already started for a small group of students, and the president of the university hopes for more progress soon.

The Islamic State’s takeover in 2014 destroyed the province’s Christian community. Almost all of them fled to places like Irbil, Baghdad or foreign countries. Now the question is whether they will come back. In May, Ninewa’s governor created a committee to try to stop the confiscation of Christian homes and help get them back into the hands of their owners. In June, there was an initiative in Mosul to clean up churches and monasteries to try to encourage Christians to return. Some priests are asking people to go back as well. The problem is many people fear for their safety, and don't trust Sunni Arabs seeing them as IS sympathizers. The Chaldean patriarch in Baghdad for example said that his community were concerned about security, while the Chaldean Archbishop in Irbil said many would rather stay in Kurdistan. A few people have returned to towns in the Ninewa plains, but it is yet to be seen whether more will follow suit. This is just the latest example of the damage the Islamic State has done to Iraqi society. Ninewa was one of the most diverse parts of the country, and now there is deep seated hatred and mistrust between the different groups that will last into the foreseeable future.