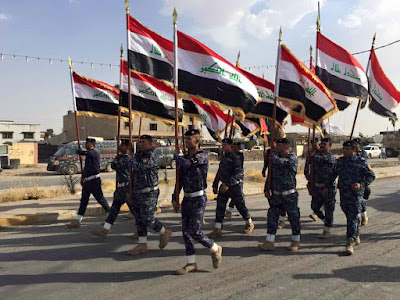 The Iraqi forces (ISF) continued their advance down the middle of the Old City and along the south. The Golden Division took Makawi in the center. It and the Federal Police were also in several other areas fighting over mosques, squares, and markets. The Golden Division claimed there was just 400 meters to reaching the Tigris River and the full liberation of the city. While different Iraqi maps are showing divergent areas under government control roughly half of the Old City remains to be freed.


A suicide bomber detonated his device hiding amongst displaced people in Nabi Jarjeesh in the Old City, which was just seized a few days ago, killing one and wounding nine. The Iraqis are always on guard against these types of attacks. When displaced men approach they are told to raise their shirts for example to show that they do not have explosives on them. Recently IS has been using women as bombers as well because they are not searched. Still, with the huge number of people attempting to flee it is inevitable that some of these types of bombings will occur.

Surprisingly the ISF actually took a step back on announcing the imminent end to the Mosul battle. Federal Police chief General Raed Shakir Jawadat denied that he said Mosul would be freed by July 3. There was more to do, and Prime Minister Haidar Abadi would be the one that would ultimately announce that the campaign was over. At the same time, the Federal Police and Rapid Reaction Division were already preparing for a parade in west Mosul. Flags and banners were being put up, and the police put on a little ceremony already. The end is in sight, and the various Iraqi units are ready to celebrate. The fall of Mosul will not mark the end of the Islamic State, but it will be a huge symbolic defeat.

According to various people living in the freed areas of Mosul there are IS members in their midst. Zuher al-Juburi, a city councilman told NBC News that he believed there were hundreds of insurgents still in the city That was supported by some civilians who claimed many fighters shaved their beards, changed their clothes, and melted into the population. People who talked with NBC said they were reluctant to go to the authorities because they feared retribution. Others talked about the threat posted by IS families, who could pass down the group’s poisonous ideology to their children. By the amount of recent attacks in freed areas there are definitely militants in the city. With so many people having stayed inside Mosul during the fighting there was probably no way to screen them all. While there are intelligence units attempting to hunt down these elements they will continue to be a problem for the foreseeable future.

The Associated Press was the latest to report on the toll air strikes were taking on Mosul. A Golden Division officer was calling in around 20 air attacks per day in the Old City. Sometimes these have been used to eliminate just 2-3 IS fighters, raising the question of how appropriate a bomb is to take out that level of threat. There is also the huge number of civilian casualties that have occurred. Airwars, which tracks Coalition operations in Syria and Iraq counted 900-1,200 civilians probably killed by air strikes during the entire Mosul campaign. The U.S., its allies, and the Iraqis have obviously decided that the gains to be made from using these types of weapons systems are worth that toll on the people of the city.

The Hashd were still having issues in western Ninewa. First, they turned back another attack by IS near the Syrian border. Second, one Hashd brigade asked Baghdad for permission to move into Syria to eliminate insurgent bases there. Finally, the head of the Sinjar Council Wais Naif complained that the Hashd were stopping displaced Yazidis from returning to the district. Since reaching the Syrian border, the militants have been carrying out occasional assaults upon the Hashd. That’s one reason why some Hashd units have been talking about crossing into Syria. The other is many pro-Iran Hashd are already fighting in Syria to support the Assad government, and would like to continue doing that in a formal matter as part of the Iraqi forces, which would give greater legitimacy to their Syrian policy. Finally, the Kurds are angry that the Hashd are in west Ninewa, because they see it as a threat to their hold over the area. There has been a war of words between the two sides as a result.

Al Forat, "The pouplar crowd repulsed a great attack near the Syrian border," 7/2/17

Al Ghad Press, “Commander of the Federal Police renews his denial of the declaration of the liberation of Mosul tomorrow: There are other tasks that must be implemented,” 7/2/17
- “Federal Police preparing to announce victory and counter terrorism is fighting in the heart of the Old City,” 7/2/17

Radio Sawa, “Counterterrorism forces: Days until the end of the battle in Mosul,” 7/2/17

Al Sumaria, “A brigade in the popular crowd asks permission from Abadi to enter Syrian territory,” 7/2/17