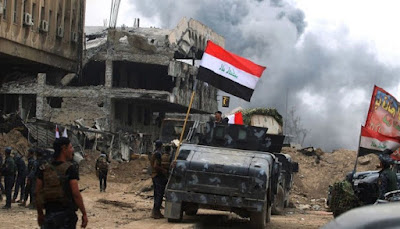 The battle of Mosul has reached its ninth month, but it is finally coming to an end. It has been one of the toughest urban battles since probably the fighting for cities in the former Yugoslavia in the 1990s. With the conflict winding down there is time to reflect and analyze how the campaign went down. To help do that is David M. Witty. He is a retired U.S. Special Forces Colonel. He served in the first Gulf War as an adviser to the Kuwaiti forces. He then took part in Operation Iraqi Freedom being an adviser to the Iraqi Counter-Terrorism Service (CTS), today known by the popular name the Golden Division, from 2007-2008 and 2013-2014. He can be followed on Twitter @DavidMWitty1.


1. The Mosul campaign started as a joint operation between the Iraqi forces (ISF), the Hashd and Peshmerga all taking part. All of these forces operate under their own command, and there are even more between the Counter-Terrorism Service (CTS), army and police within the ISF. How did the forces cooperate?

It was a very difficult task for the overall Mosul commander, LTG Abd’ al-Amir Yarallah, to coordinate these diverse forces.  There was the Peshmerga which reported to the Kurdish Regional Government.  There was the Iraqi Counter-Terrorism Service which reported directly to the Prime Minister.  There was the Hashd (Popular Mobilization Units), which in theory worked for the Prime Minister but had varying degrees of Iranian influences with Iranian advisors.  There was the Iraqi Federal Police which reported to the Minister of the Interior through the commander of the Federal Police.  There was the Emergency Reaction Division (ERD) which worked directly for the Minister of Interior.  Then there were the Iraqi Army divisions, the 15th and 16th Infantry Divisions and the 9th Armor Division, which worked for the Minister of Defense.  It is amazing it was able to work at all.  There were reports that LTG Yarallah had to coax the various units into following his scheme of maneuver.  I think this explains the disjointed efforts we saw in the first few months of the battle when CTS operated in East Mosul alone while other units lagged outside of the city.  ISIS was able to focus all its power on CTS, which led to significant casualties for CTS.  This happened again in the battle for West Mosul, when for months the only units attacking in the city were CTS, the Federal Police, and ERD.  When Iraqi forces attacked on multiple axes with all forces involved, they were successful, but not otherwise.  It was if the lessons from the East Mosul Battle had to be relearned for the West Mosul Battle.

2. The original plan was to attack Mosul from multiple directions using all the ISF units. Instead, the CTS reached the city far before the rest of the forces and was ordered to enter on its own. What happened to the initial game plan, and what were the effects of the CTS going it alone at first inside Mosul?

The Army and Federal Police showed a reluctance to go into East Mosul, and as I mentioned above, it caused significant losses to CTS.  For example, the 1st ISOF Brigade of CTS had lost 50 percent of its HMMWVs (Hummer) vehicles by mid-December or so.  Some reporters mentioned that CTS went into West Mosul at 50 percent strength.  There was also some speculation that the Federal Police and Army might have held off on entering the city proper in order to take CTS down a notch since it had received the lion’s share of the headlines since 2014.

3. The Iraqi army’s 15th and 16th Divisions took part in the battle for east Mosul. These were two divisions that had little combat experience and had been rebuilt by the U.S. led Coalition. How did they fare and how did that shape their use in the battle for the west?

Well, their efforts were mainly confined to outside of the city for the majority of the battle.  16th Division was tasked with securing liberated areas of East Mosul before its final involvement in West Mosul.  Both divisions made some good progress in the final stages of the West Mosul Battle with parts of 16th Division pushing into the Old Mosul area. The 15th Division has now been designated to take Telafar and was pushing in on the ISIS perimeter around that city, but I have not heard many announcements of progress recently.  I don’t think we can label 15th and 16th Divisions’ efforts as in anyway decisive in deciding the battle of Mosul, but they did appear more capable of holding terrain at least, which was a major Iraqi Army shortcoming in numerous battles ever since the fall of Fallujah in early 2014.

4. In the west Mosul battle much of the fighting has been done by the Interior Ministry’s Federal Police and Rapid Reaction Division/Emergency Response Units. There has been some criticism of their use in a tough urban fight and how they have deployed artillery and mortars. Were those critiques sound?

I think that is a fair critique.  I watched much of battle for West Mosul on Iraqi State TV, and there were numerous images of artillery and rockets being fired by the Iraqi Federal Police into Old Mosul in a haphazard manner.  For example, mortars were fired without using aiming stakes or re-sighting mortars between volleys of rounds fired.  They faced a lot of criticism that they were untrained in urban combat and that CTS should have been committed to the toughest fighting in Old Mosul with its narrow streets and packed population earlier in the battle for West Mosul.  But as mentioned, CTS was heavily attrited in East Mosul.

5. Overall, how has the Mosul campaign shaped the future of the Iraqi forces, and will they be ready for the next phase against the Islamic State, which will revert back to an intelligence and counterinsurgency war?

Well, the most capable force for counterinsurgency and counter-terrorism was recklessly used in the Mosul Battle, CTS.  Although CTS is going to rebuild its strength and even has plans to increase in size to 20,000, this is not so easily done.  Some of CTS had been trained by the U.S. since 2003, so this is not a capability that can be easily reproduced.  There is still much hard conventionally fighting ahead as well, Telafar, Hawijah, and west Anbar.  Let’s hope that the victory in Mosul does not turn out to be a Pyrrhic victory.

Reading that interview all the Iraqi forces except for CTS seem to be hopeless from beginning to end. How on earth did they clear Mosul at all? And how did the militias go?

Hands down CTS are the best units in the entire country. They did all the heavy fighting in both east and west Mosul. The army's 9th Division was also involved and provided army for different units. Were up and down in battle. 15th and 16th Divisions were basically green and did not do much combat. Federal Police and ERD were roundly criticized for indiscriminate use of artillery in west Mosul and causing large civilian casualties. Their main job in west Mosul was to take the Old City and failed. Led to change of complete game plan. Nujafi's Ninewa Guards were involved in fight early on outside of Mosul and then came in the northeast with an army unit. Were not involved in west. Rest of Hashd were not allowed into city over fears of how population would act. Some did come into east after it was liberated.