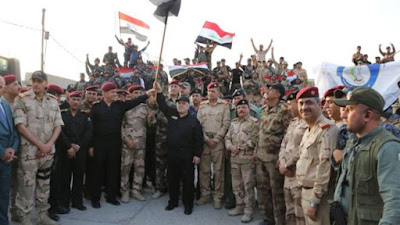 The last areas held by the Islamic State in west Mosul were finally cleared, allowing Iraq’s Prime Minister Haidar Abadi to declare victory in the nine-month long campaign. At the start of the day, there were still a few IS elements in the Shahwan and Qalahat neighborhoods along the Tigris River. Three soldiers from the Golden Division were killed in the fighting. That initially held up the premier’s speech, but by the middle of the day Abadi appeared and gave his address. He said Mosul was a triumph against terrorism, darkness, and brutality, and marked the collapse of IS’s state. The next challenge was stabilization and rebuilding. Before that can happen the Iraqi forces (ISF) still need to mop up the Old City to make sure no insurgents are hiding out in buildings, tunnels or amongst the displaced. The U.S. led Coalition called this the heaviest urban combat since the Battle of Stalingrad during World War II. Even though the war is not over the Iraqis have much to be proud of, and they have been partying in the streets for the last two days.


Al Mada had an excellent article about how Abadi’s itinerary and address worked out. At the end of July 8 ISF commanders were saying that the fighting was over in Mosul, and everyone was getting ready to celebrate. That was why Abadi arrived in Mosul on July 9 to declare victory. When he got there however he was informed that IS was still resisting in the Old City. He was none too pleased. The Coalition also advised him to not make his announcement yet. According to the paper this was the fifth false call that the battle was over. Abadi ended up doing a tour of ISF units and thanked them for their hard work. Finally, after the last bits of resistance were put down Abadi gave his speech. The different Iraqi units have been in a competition since the start of the Mosul campaign in October 2016 to outdo each other on the battlefield. Each wants to claim they have seized the most territory, and that they have killed more militants. That was the cause of all the claims that Mosul was finished when it wasn’t. These differences have been apparent in the press for quite some time.

There were more examples of this with the early death counts for IS fighters. First, Ninewa Operations Command claimed 650 Islamic State members had been killed just on July 10. The Federal Police said that 1,000 IS elements had died in the Old City in total. Finally, a parliamentarian from the security committee stated that the militants lost 28,000 with another 4,000 arrested during the entire campaign. These were all likely hyperbole. The Iraqis claimed IS only had 350-750 gunmen left when the Old City was assaulted. The U.S. led Coalition estimated 16,000 Islamic State elements in all of Syria and Iraq. The ISF always claims IS only has a few men left, but then after the battle is over the figures dramatically escalate. Again, this is due to the drive by ISF units to brag about how much they have achieved, and add to the victory narrative promoted by Baghdad.

The insurgents are still active in Ninewa. The town of Imam al-Gharbi southeast of Mosul remained under IS control. The Islamic State launched an attack against the Iraqi forces during the day. Only around 150 IS fighters were said to have seized the town on July 5, yet the ISF have not been able to dislodge them since. From the village, the militants have been able to threaten the Qayara base, which houses U.S. troops and is a major supply and transportation hub in the province. The Iraqis have been very concerned about this, while playing it down in the media at the same time.

With the battle over political disputes have started coming to the fore. Moqtada al-Sadr demanded that those responsible for the fall of Mosul in 2014 be held responsible. He was referring to his political opponent Nouri al-Maliki that Sadr’s parliamentarians (MPs) have targeted before for Mosul. Two MPs on the security committee, including Sadrist Hakim Zamili accused Federal Police chief General Raed Shakir Jawadat of bad leadership that cost the lives of his policemen, of only being concerned with media coverage, and corruption. The Federal Police responded saying that Zamili was being partisan, and that the general spent five months on the battlefield defeating the Islamic State. More of these types of accusations are likely to be brought up in the coming weeks and months. That’s especially true with elections coming up next year, and politicians wanting to score political points.

There are still hundreds of thousands of people displaced from the Mosul campaign. The United Nations had 4,800 coming out of the Old city from July 6-7. The International Organization for Migration recorded a total of 827,628 displaced (IDP) in Ninewa. At the same time, around 2,000 people were going back to the city per day according to the Displacement Ministry. 9,000 people are trapped around Tal Afar as well. For an unknown reason, they have not been able to move to IDP camps. The repatriation of all these people will be another dilemma the province will have to deal with now that Mosul is freed. Currently, people in camps are concerned about security in the city slowing down the rate of return.

Iraq Newspaper, “Al Iraq Reporter In Mosul: Pentagon Announces Daesh Loses Control And Call For Thanks To Hashd,” 7/11/17
- “Iraqi Newspaper Reporter In Mosul, Ninewa Provincial Council Reason For The Delay In Announcing The Liberation Of Shahwan And Qahalat,” 7/10/17

Iraqi Broadcasting Networks, “The Federal Police Respond To Zamili’s Remarks: Jawadat Has Been On The Battlefield For 5 Months And Has Not Left The Field,” 7/10/17

Waradana, “American pressure behind the failure to announce the victory statement,” 7/10/17

World Vision, “Long road ahead for Mosul’s children after city re-taken from ISIL,” 7/10/17