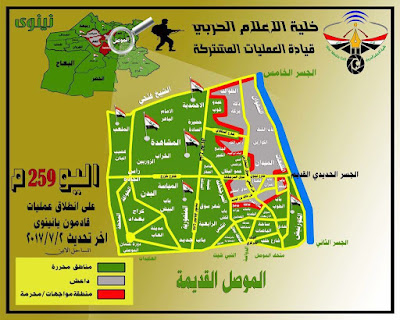 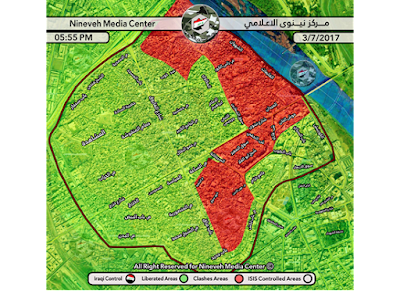 Iraqi government is not coordinating their media releases. Ninewa Media Center (bottom) shows much more of the Old City in west Mosul to be cleared compared to the War Media Cell (top) 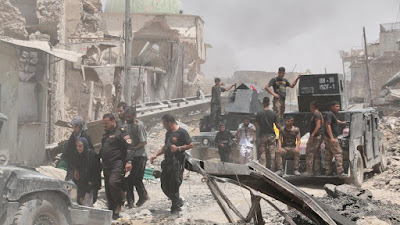 There were more advances in the Old City in west Mosul by the Iraqi forces (ISF). The Golden Division seized Ras al-Koor in the center of the district, the Federal Police took Bab al-Sarai, and was advancing on Khalid Ibn al-Waleed and Nujafi, while the Rapid Reaction Division reached Khalid Bin al-Waleed Street. Katunya was attacked by the 16th Division and a garage was taken in Sargkhana although both were supposedly freed. Depending upon the source the ISF has 200-250 meters to reach the Tigris River. A general from the Golden Division predicted that the fighting would be over in a week. On the other hand, Federal Police chief General Raed Shakir Jawadat claimed his units had finished their mission and were waiting for Prime Minister Haider Abadi to announce victory over the Islamic State. The Joint Operations Command corrected him saying that the Federal Police were still in combat and had not taken all their objectives. Roughly 40% of the Old City remains in Islamic State control. The end is near however, which means Iraqi releases are over anxious to proclaim victory.


Another example of that problems was the recent death count for IS fighters. The Golden Division said that 900 IS members had been killed in the Old City. The number of insurgents has been all over the place depending upon the source. On May 18 General Najm al-Jabouri commander of Ninewa Operations had 750 elements in all of Mosul. May 24, the Ninewa government put the figure much lower at 350. Coalition spokesman Colonel Ryan Dillon had the highest estimate at 1,000 on June 2, while the Federal Police put the number at 500 that same day. The point is 900 seems far too high, and is likely an exaggeration. Given the fact that the Iraqis earlier claimed to have killed 16,500 IS elements in Mosul, more than all estimated IS members in Syria and Iraq combined, these kinds of statements are far from reliable.

The Iraqis reported that the Islamic State was turning to female suicide bombers in Mosul. 2 girls, aged 14 and 12 hit ISF lines on July 3, along with 5-7 more that same day. The women were hiding amongst people trying to flee the combat zone to get close to their targets. Because of their gender the Iraqi forces don’t search them, which is another reason why they are being deployed.

Civil defense forces uncovered 74 bodies in the rubble of Zinjali in central west Mosul. Most of them were shot and executed by the militants. They were most likely killed attempting to escape or were accused of cooperating with the security forces. IS has been carrying out mass executions since the start of the Mosul battle.

A member of the Ninewa Council was the latest to proclaim that the ISF will free Tal Afar, not the Hashd. A councilman told the press that the Golden Division and army would be given the job, while the Hashd will remain outside. An army division has already attacked the district. When Mosul is over it will be joined by the Golden Division. This has been tremendously frustrating for the Hashd who thought Tal Afar would be their role in the Mosul campaign. Instead they have been relegated to taking vast rural areas of west Ninewa. Baghdad has not allowed them to enter Tal Afar because of objections by Ankara who threatened military intervention if they did.

An explanation was finally given for why the number of displaced in Ninewa recently took a huge jump. On June 25, there were 435,216 registered displaced (IDPs). That suddenly rose to 819,534 on June 28, and stood at 821,178 on July 1. The International Organization for Migration let it be known this was due to new data being included, not a specific event. The new displaced number added to the returns means roughly 1 million people have lost their homes in total during the Mosul battle. This has been a huge strain on humanitarian agencies and the government who have struggled to care for this huge population.

People continued to come out of the city. The United Nations had 1,400 on July 1 from the Old City. At the same time, people are going back, but at a lower rate because of the wave of IS attacks in liberated areas. That has given caution to IDPs who now fear security may not be stable enough to make the trip.

Radio Sawa, “Counterterrorism forces: 200 meters separate us from the Tigris,” 7/3/17

Wardana, “The storming of the strongest defensive base by Daash in old Mosul,” 7/3/17

Wattan News Agency, “The arrival of the Rapid Reaction Forces to Khalid Bin Waleed Street in the old city of Mosul,” 7/3/17